The impacts of increasing greenhouse gas concentrations are already being felt around the globe, though the degree of change varies with location. The Third National Climate Assessment (NCS), released in 2014 by the US Global Change Research Program (USGCRP), reports that over the last century increasing average temperatures, increasing weather variability, increasing warmer nights and winters, lengthening of the growing season, and an increase in the frequency and intensity of extreme weather events have already been observed. The severity of these impacts vary throughout the US and the world because of regional topography, proximity to the ocean, atmospheric circulation patterns, and many other factors.

The average temperature in the United States has increased in the last century, with each recent decade being warmer than the past, but this warming is not uniform across the United States (Figure 9.1.5). In general, western and northern regions have warmed more than the southeastern US. In the most recent decade, all regions have shown warming. What impact might this warming trend have on our food production and water supply? For example, we know from our study of water for food production that plants evaporate or transpire water and that the rate of evaporation is dependent on temperature. If temperatures go up, we know that plants will transpire more water. The southwestern US is already a water scarce area, so increasing temperatures will exacerbate that condition.

We'll explore more connections between climate change and food production in the next section of this module. First, let's investigate changes in some other climate variables. Figure 9.1.7.: Observed Change in Very Heavy Precipitation. The map shows percent increases in the amount of precipitation falling in very heavy events (defined as the heaviest 1% of all daily events) from 1958 to 2012 for each region of the continental United States. These trends are larger than natural variations for the Northeast, Midwest, Puerto Rico, Southeast, Great Plains, and Alaska. The trends are not larger than natural variations for the Southwest, Hawai‘i, and the Northwest. The changes shown in this figure are calculated from the beginning and end points of the trends for 1958 to 2012. Credit: USGCRP 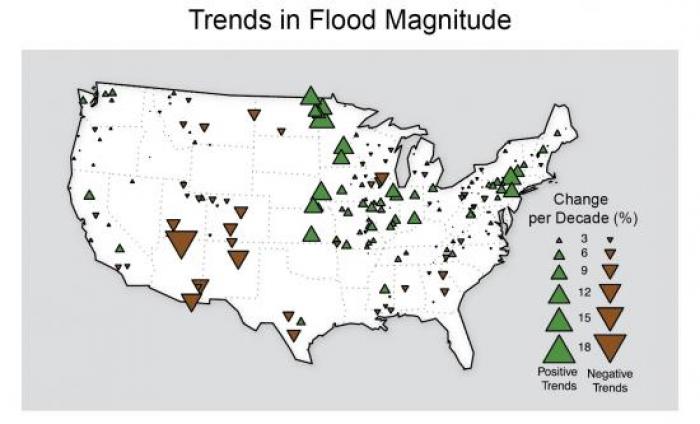