Human System Impacts on the Environment Within Food Systems

Figure 10.2.1.: The collection, transport, and application to the soil of plant nutrients using animal manure (left), and the destructive effects of erosion from tillage on sloped land (right) are two human system impacts on the earth system. Credit: Steven Vanek Figure 10.2.2.: Fertilizer production, like in this old print of a factory in Philadelphia, Pennsylvania, and a large new plant in India, represents a substantial contribution to the energy expenditure and greenhouse gas footprint of food production via modern agroecosystems. Credits: top, Boston Public Library, used with permission via a creative commons license; bottom: used by permission through the Wikimedia Commons.

In modules one and two of this course, and most recently in this module, we represent food systems as coupled human-natural systems. Throughout the course, we have tried to emphasize the dramatic impacts that human food production has had and continues to have on earth's natural systems. Here are some examples from previous modules:

Different types of food systems – global, smallholder, and alternative, as we summarized in module 10.1 -- may all impact the earth's natural systems in a different way and to different degrees. You may recognize on the short list of examples above that the impacts from these changes and the creation of agroecosystems by humans may have both positive and negative aspects. For example, irrigation and crop breeding both have as objectives increasing the productive potential of crops. They may carry other unforeseen consequences, such as depletion and collapse of water resources, changes in the dietary quality of food with domestication and breeding, and greater use of herbicides in the case of Roundup-ready crops. These human system actions within the food system improve production can be seen as the initial driving arrow as part of a human-natural system coupling (Fig. 10.2.3) and generally involve management, reorganization of the ecosystem, and energy and nutrient inputs (e.g. the use of fossil fuels to create fertilizers). The natural system then responds with positive and negative impacts on productivity and other natural system processes, which can include positive and negative consequences. These consequences eventually determine the level of sustainability of the food system. The massive extent of food systems and food production globally, within different types of food systems, translates into a large effect, or leverage, on the sustainability of human societies. To promote the sustainability of food systems, we must understand how food systems as a whole affect measures of sustainability. In this unit, we will first refer to the different human system impacts on natural systems, and then allow you to practice life-cycle assessment (LCA) to compare the energy use of two food production systems in the Andes and North America. 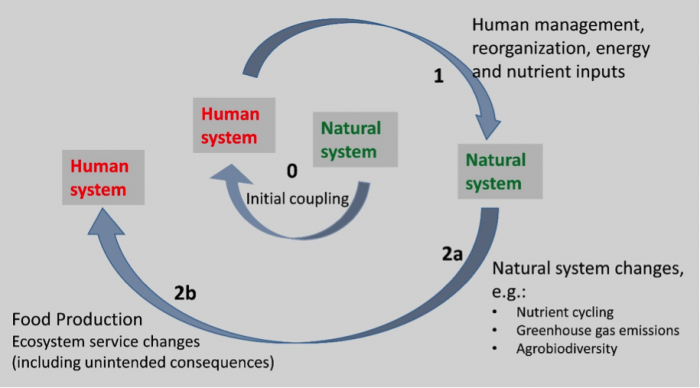