Incidence graphs are useful tools for chemical engineers to model various relationships in a process. They are used to systematically map an entire chain of processes and controllers to describe the effect, which each element has on the others. This helps to visualize the possible process pathways or a chain of effects.

Below is an example of an incidence graph. The circles are nodes which represent a particular device or controller, e.g. a temperature sensor. The arrows indicate the directional pathway of influence. For instance, a temperature sensor node would be connected to an adjacent node (such as a heat exchanger). This heat exchanger node would in turn be connected to other nodes representing devices or controllers. This type of diagram could be extremely useful in identifying the redundancies within a control system. A more elaborate application of incidence graphs will be discussed in the Worked Out Examples section. 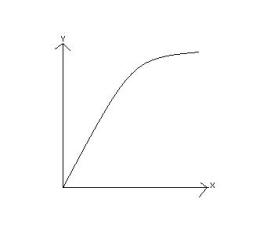 As long as a function is either always monotone increasing or monotone decreasing, it is referred to as a monotone function.

Monotonic functions are ideal systems to control because changes in one variable/device lead to known changes in other variables/devices. A non-monotonic function on the other hand, does not yield a straightforward output for a particular input. In these cases IF-THEN-ELSE statements are used to illustrate the controls for the nodes. For instances, IF node 1 is activated, THEN node 2 is repressed and so on.

An example of a possible non-monotonic graph Incidence graphs (also “Levi” or “Causation” graphs) consist of monotonic connections between nodes, whereby each connection indicates a particular effect of one factor on another. The term “monotonic” means that a change in the initiating device influences only one aspect of the target device. This simplification facilitates describing how control systems work through the use of incidence diagrams.

In reality, not all interactions are monotonic. Some control devices can simultaneously affect several aspects of other devices or variables. This may result in a non-monotonic relationship, in which one factor increases another over one region, but diminishes it over another (imagine a parabola, which is a non-monotonic curve). Temperature often has such a relationship with the rate of a reaction: for an exothermic reversible reaction, increasing the temperature will increase yield up to a certain point; however, further increase will diminish the yield.

When two factors are connected by multiple signal paths, incoherence between the results of different paths leads to inconsistency. In other words, the outcome cannot be predicted because the incidence graph does not communicate quantitative information. For instance, in the reaction rate example, reaction rate could be separated into the variables which affect it: concentrations, rate constant, and equilibrium constant. An incidence graph can then be constructed to demonstrate that temperature and reaction rate have an inconsistent relationship.

A diagram is consistent (to be discussed later in detail) if all signal paths between two nodes, for every pair of nodes, are in agreement with one another (i.e. they have the same result).

Every incidence graph establishes a particular way to depict the direct effects of one device on its neighbors. Typically, a line will connect a node to its neighbors--these lines are terminated by either a bar or an arrowhead.

An arrowhead at the end indicates that the initiator (from which the line is coming) is either increasing the value of the target (where the arrow is pointing) or simply activating it (turning it on). The context of the connection will determine whether something is being increased or turned on. For example, it would be illogical to assume that a drop in temperature would cause a temperature controller to deactivate a pressure controller. Instead, it would be more prudent to assume that the temperature controller would adjust the pressure sensor.

A perpendicular bar indicates that the initiating device is either decreasing the value of the target device or inhibiting it (turn off). Note that these indications are not necessarily strictly followed. Once again, context of the situation determines which interpretation should be used.

Graphs consisted of the arrowhead bar and the perpendicular bar allow you to see the result of an increase/decrease in one aspect of the initial device on a designated device in the system. Everything done after the initial device comes as a result of changing the initial device. In addition, these graphs provide the possibility of simplifying complicated relationships between devices into one conceptual unit. The relationship between the initiating device and target nodes can be described by the following set --> {initiator,target1,target2,etc}. It is read as "the increase or decrease in the initiating device affects the target nodes in the following manner... (+ for increase/activate and - for decrease/inhibit). The initiator can be any device or variable in the system as long as the arrows support the designation. In other words, you can show the effects of any device on any other device, as long as the pathway is supported by the diagram. There are often multiple routes that a signal can travel.

2 helpful tips to keep in mind as you interpret an incidence graph:

1. Always travel from tail to head (or source to target) when traversing the graph from the initiating device to the designated device. Keep in mind that it is possible to have arrowhead and/or perpendicular bars pointing in both directions in between two devices.

The following is a simple example of an incidence graph. We will refer to the circles below as “nodes” from this point onward. Nodes are the selected devices or variables in a control system.

a. A change in an aspect of 1 will change some aspect of device 2 in the same direction -- otherwise written as {+,+}

a. increase in an aspect of 2 (initiator) decreases some aspect of 1 (target)

This next example builds on the previous two... Given an arbitrary 3,1,2 order, an increase in 3 (initiator) will make 1 (target) go up. 1’s increase will then make 2 decrease. The symbolic representation for this would be {+,+,-}. One can see that this diagram shows how node 3 influences everything directly and indirectly connected to it.

Now, given a 1,2,3 order, node one becomes the initiator. The symbolic representation then changes to {+,-,-}. NOTE: the last node is negatively affected because 2’s impact on 3 is shown to increase when 2 increases. But since 1 decreases 2, then the opposite is true!

The main objective of these diagrams is to determine the effect that a change in the starting node has on another node in the system. However, in some cases, you can follow a pathway that ends at the starting node in order to check for ambiguity. For example, the 1,2,3,1 order yields a result of {+,-,-,-}. Since increasing node 1 cannot cause a decrease in itself, it is ambiguous.

Incidence graphs for complex controls systems will usually indicate that there are several ways for a device to influence another device in the system.

Remember these are done with respect to increases in a node’s value. So, if a path leads you to a point where you decrease a node, then you have to do the opposite of what the diagram is indicating for all steps after that (for that route). Consistent pathways happen when all pathways from the same starting node, that lead to the same target node, give the same output.

All possible pathways from node 1 to target node 4 yield the same output. These are called consistent pathways. From the table and graph above, all pathways from node 1 to node 4 yield the same outcome. Node 4 is being decreased. All pathways leading from node 1 to node 3 -

Since the two pathways cause the same change to node 3, this sub-pathway is consistent.
All pathways leading from node 3 and to node 2 -

Since the two pathways cause same change to node 2, this sub-pathway is consistent.

All pathways leading from node 1 and back to node 1 -

Since the two pathways result in the same change to node 1, this sub-pathway is consistent.

All pathways leading from node 3 and back to node 3 -

Since the three pathways give the same effects to node 3, this sub-pathway is consistent.

Because all sub-pathways of this incidence graph are consistent, the entire process is consistent.

The table shown below gives examples of many different incidence diagrams and shows whether or not they are consistent. Another type of consistent graph is one in which the valves of the system are not dependent on one another for feedback. In other words, there is no proportion of the output signal from a particular valve of a system is passed to the input of another valve. An example of this would be to consider the following process diagram:

This process is of a distillation column in which the bottom columns collect high intensity liquids and the liquid is removed from a series of evaporators. The evaporator is a single-effect evaporator equipped with a simple heat exchanger, a separation vessel and a steam jet ejector to supply the vacuum. The product is then sent to an oven where it is dried and sent to the manufacturer. It is the chemical engineer’s task to create a consistent incidence graph in which the valves in the diagram do not depend on each other’s feedback. An example of this is below: Based on the table above, the incidence graph is consistent because the valves are not dependent on one another for feedback.

Inconsistent pathways happen when pathways from the same starting node, that lead to the same target node, give different output.

Pathways from node 1 to target node 4 do not yield the same output. These are called inconsistent pathways. From the table and graph above, all pathways from node 1 to node 4 do not yield the same outcome. Node 4 is being decreased while simultaneously being increased. All pathways leading from node 1 to node 2 -

Since the two pathways cause different changes to node 2, this sub-pathway is inconsistent.

All pathways leading from node 1 and back to node 1 -

Since the two pathways cause different changes to node 1, this sub-pathway is inconsistent. All pathways leading from node 1 to node 4 -

Since the three pathways cause the same change to node 4, this sub-pathway is consistent.

All pathways leading from node 1 and to node 2 -

Since the two pathways cause different changes to node 2, this sub-pathway is inconsistent.

In this graph there are sub-pathways that are consistent and inconsistent, therefore the incidence graph is partially consistent. Note: (There may be more than one correct solution to the assigned problem) After completing the assignment of devising the temperature control, your boss asked you to devise a mechanism to control the flow of raw materials and products. Draw a causation graph showing negative feedback relations between L1, V1 and V4 when the level inside the reactor is increasing (this is an example of an inconsistent pathway). The normal operating conditions are shown below:

Determine whether the following causation graph is consistent, inconsistent or partially consistent. Include your reasoning. All relationships are consistent. Each variable 1,2,3,4 has a simple relationship which is monotonic among the other variables in the set.

A Brief Narration for Better Understanding of the Incidence Graphs