A surge tank is an additional safety or storage tank that provides additional product or material storage in case it becomes needed. Heat exchange can be added to surge tanks, which provides temperature control for the tank. Within a system these tanks can appear as distillation columns, reboilers, heated CSTR’s, and heated storage. They can increase production rates by allowing a batch of product to finish reacting while the initial tank is reloaded, provide constant system parameters during start up and shut down, or create additional storage space for product overflow or backup material. Above is a basic example of a heated surge tank. While surge tanks can have multiple inputs and outputs, for simplicity we have only included one of each here.

Connected to the tank is a temperature control, which controls the heater. Depending on the temperature of the fluid, this control will increase or decrease the heating to the tank. This will keep the fluid at the necessary temperature to meet the process requirements.

There is also a level control connected to the tank to indicate when the tank has neared maximum capacity. When this happens, the control will open the valve at the bottom of the tank, allowing the product to flow further down the process. The control can also slow or stop the flow coming through the input valve. These mechanisms will prevent the tank from overfilling. The position of the level control depends on the type of material in the process, the phase of the material, the type of level control, and the requirements of the system.

The basic equations that govern heated surge tanks are shown below. First, a simple mass balance is done on the system. Second, the energy balance was simplified using the assumptions listed below. Most problems involving this type of tank can be described by these equations. Additional considerations may require additional variables and equations.

1) The substance coming into the tank is uniform.

2) No reaction is taking place.

3) The tank is well mixed, which means the temperature profile is constant throughout the tank. At IBM’s manufacturing facility outside Burlington, Vermont, a heated surge tank is used in the de-ionized water system. In order to wash semi-conductor wafers in manufacturing, the water has to be about 1,000,000 times cleaner than the incoming city water. All of this purification is done on site.

The water comes in from the municipal water source at a constant flow rate, but manufacturing demand is not constant. In order to compensate for this, when the demand in manufacturing is low, a surge tank is used to store extra water for high demand periods. Because the large tank is located outside and the winter in Vermont is very cold, the tank is heated to prevent the water inside from freezing.

2.5 Worked out Example 1 - Determining Temperature of Heating Fluid for Tank

A heated surge tank is being designed to hold paraffin wax coming from a distillation column at an oil refinery. High pressure steam will be used as a heating fluid in the heat exchanger to heat up and maintain the paraffin at 51°C (to maintain high viscosity and prevent solidification). The physical parameters of the tank (volume of 5 m3) and heat exchanger within it are given. The tank is originally filled with paraffin at room temperature. At what temperature must the high pressure steam be to sufficiently heat the paraffin; will a proposed temperature of 130°C be adequate?

Worked out Answer to Example 1 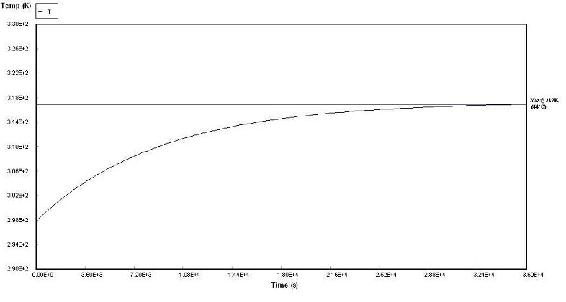 Trying a heating fluid at 277°C, we generate the plot below. The plot shows that the tank will reach a temperature of about 55.5°C (328.5K) with a heating fluid at 277°C. This will be sufficient to maintain the paraffin in the liquid phase.

For the same surge tank from problem 1, if the heater fails for 2 hours after 10 hours of operation and is then restarted, how long will it take after it is restarted to reach steady state?

The first manipulation that must be done to your Polymath code is to create an "if-then-else" statement for the dT/dt line for the case before hour 10, the case between hour 10 and hour 12, and the case after hour 12. For the time ranging between 10 and 12 hours, because the heating element has failed, the differential equation over this period must reflect that. Thus, the section (U*A*(Ta-T)) from the differential equation is dropped and the equation appears as follows: d(T)/d(t)= (-vin*rho*Cp*(T-Tin))/(Cp*V*rho). For any other time in this simulation, the normal dT/dt equation is used. In order to determine where the surge tank reaches steady state again, the final time is increased until dT/dt appoximately reaches zero. The graph generated in Polymath will look like the following, using the code below as a parameter: