If you expand the previous Second-order differential equation:

Expansion of the differential equation allows you to guess what the shape of the solution (Y(t)) will look like when X(t)=1. 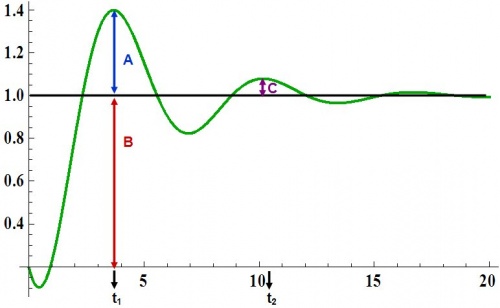 The decay ratio (C/A) can be calculated using the following equation:

The overshoot (A/B) can be calculated using the following equation:

The period (T) and the frequency (ω) are the following: develop an expression describing the response of H2 to Qin. Determine if the system is over, under or critically damped and determine what the graph of the expression would look like using the complex τ plane above. A diagram of the system is shown below: Performing a mass balance on each tank:

This expression shows the response of H2 to Qin as a second order solution like those pictured above. Here Y(t)=H2 and X(t)=R2 Qin

Both values of τ are positive real numbers, and the behavior of the graph of the equation can be found on the complex τ plane above.

It might be helpful to use a spring system as an analogy for our second order systems. From Newton's second law of motion,

For the spring system, this equation can be written as:

x'' is the acceleration of the car in the x-direction

k is the spring constant, which relates displacement of the object to the force applied

f is the frequency of oscillation

As you can see, this equation resembles the form of a second order equation. The equation can be then thought of as:

Because of this, the spring exhibits behavior like second order differential equations:

it is critically damped