A case or switch statement is a type of selection control mechanism used to allow the value of a variable or expression to change the control flow of program execution via a multiway branch.[1]

One of the drawbacks of two-way selection is that we can only consider two choices. But what do you do if you have more than two choices? Consider the following which has four choices:

You get an appropriate message depending on the value of age. The last item is referred to as the default. If the age is not equal to 18, 39 or 65 you get the default message. In some situations there is no default action. Consider this flowchart example: 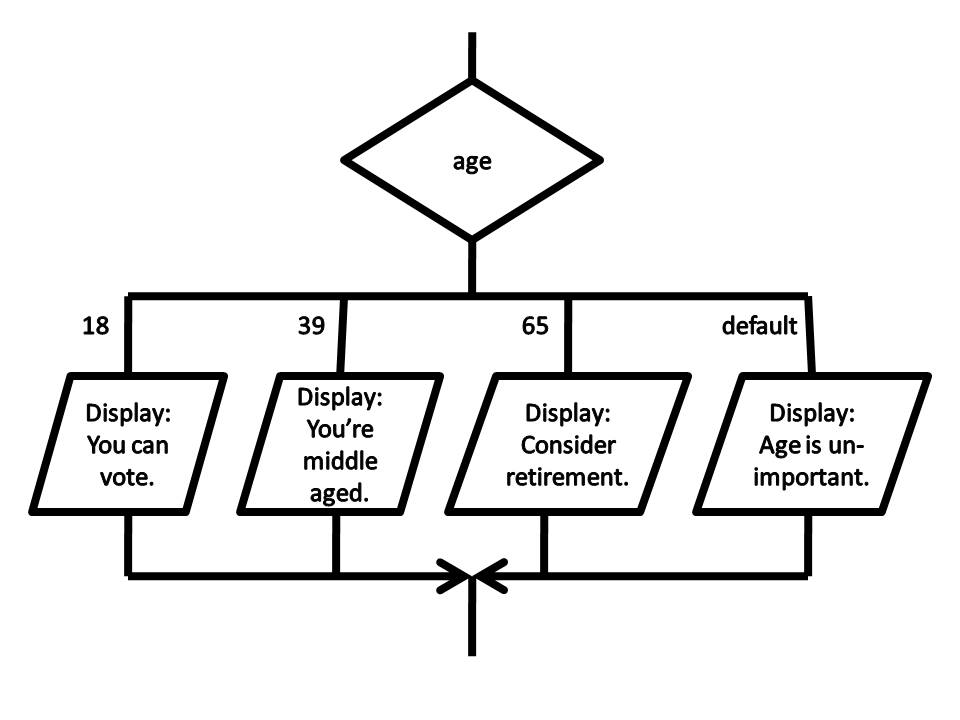 This flowchart is of the case control structure and is used for multiway selection. The decision box holds the variable age. The logic of the case is one of equality wherein the value in the variable age is compared to the listed values in order from left to right. Thus, the value stored in age is compared to 18 or is “age equal to 18”. If it is true, the logic flows down through the action and drops out at the bottom of the case structure. If the value of the test expression is false, it moves to the next listed value to the right and makes another comparison. It works exactly the same as our nested if then else structure.

The value in the variable age is compared to the first “case”, which is the value 18 (also called the listed value) using an equality comparison or is “age equal to 18”. If it is true, the message is assigned the value “You can vote.” and the next line of code (the break) is done (which jumps us to the end of the control structure). If it is false, it moves on to the next case for comparison.

Many programming languages require the listed values for the case control structure be of the integer family of data types. This basically means either an integer or character data type. Consider this example that uses character data type (choice is a character variable):

Limitations of the Case Control Structure

Most programming languages do not allow ranges of values for case-like structures. Consider this flowcharting example that used ranges: Consider also the following pseudocode for the same logic:

Using the case control structure when using non-integer family or ranges of values is allowed when designing a program and documenting that design with pseudocode or flowcharting. However, the implementation in most languages would follow a nested if then else approach with complex Boolean expressions. The logic of the above examples would look like this:

case
A control structure that does multiway selection.