SFGs are convenient ways to graphically represent systems of simultaneous linear equations [1, 2]. SFGs are used in many disciplines, but they are particularly useful with RF and microwave circuits.

An SFG represents a linear operation on an input. Consider the inductor shown in Figure \(\PageIndex{1}\)(a), where the circuit quantities are \(v\) and \(i\), and these are related by the impedance of the inductor \(sL\). The SFG representation of this relation is given in Figure \(\PageIndex{1}\)(b), with the operation performed written beside a directed edge. The operation here is simple, multiplying an input quantity by a scale factor. The edge is directed from the excitation node to the response node. The algebraic relationship between \(v\) and \(i\) is, in the Laplace domain,

In this section the basic rules for manipulating SFGs are presented. Think back to when you first started working with circuits. The great abstraction came about when the physical world was represented graphically as connections of circuit elements. Provided that a few simple rules were followed, the graphical representation enabled recognition of circuit topologies and the selection of appropriate solution strategies (e.g., applying the voltage divider rule). When it comes to working with \(S\) parameters and interconnections of multiport networks, SFGs serve much the same purpose. As well, SFG analysis enables the development of symbolic expressions. Only a portion of SFG theory is considered here—the aspects relevant to manipulating scattering parameter descriptions. Balabanian [3], Abrahams and Coverly [4], and Di Stefano et al. [5] provide a more detailed and general treatment.

where \(\mathbf{a}\) and \(\mathbf{b}\) are vectors and their \(i\)th elements refer to the incident and reflected waves, respectively. These relationships can be represented by SFGs. Consider the two-port in Figure \(\PageIndex{2}\)(a) described by the equations

which are represented in SFG form in Figure \(\PageIndex{2}\)(b).

3.2.3 Simplification and Reduction of SFGs

The power of SFG analysis is that an SFG can be formulated by building up the set of equations describing a network by connecting together the SFGs of sections. Pattern recognition can be used to identify patterns that can be

Figure \(\PageIndex{1}\): An inductor represented as: (a) a two-terminal element; and (b) its signal flow graph.

Table \(\PageIndex{1}\): Mathematical relations in the form of signal flow graphs with edges connecting nodes. Edges and nodes are used in graph theory, a superset of SFG theory. An edge is also called a branch.

Figure \(\PageIndex{2}\): Two-port represented as (a) a two-port network with incident and reflected waves; and (b) its SFG representation.

reduced and simplified to arrive at a simple relationship between system input and output. Humans are extraordinarily good at pattern recognition.

The rules that govern the simplification of SFGs use the fact that each graph represents a set of simultaneous equations. Consider the removal of the internal node, \(b_{3}\), in Figure \(\PageIndex{5}\)(a). Here

Node \(b_{3}\) is called a mixed node (being both input and output) and can be eliminated, so

Recognizing a self-loop and eliminating it is the best example yet of pattern identification and direct application of SFG reduction strategies. Consider the SFG of Figure \(\PageIndex{6}\)(a), which has a self-loop, which describes The equations for this graph are The two-port is shown to the right with the load attached. The input reflection coefficient is \(\Gamma_{\text{in}} = b_{1}/a_{1}\) and the properties of the source here have no impact.

The sequence of SFG manipulations is shown in Figure \(\PageIndex{10}\) beginning with the SFG in the top left-hand corner. So the input reflection coefficient is

Now, the traveling wave voltages are related to the a and b root power waves as (see Equation \(\eqref{eq:15}\))

Example \(\PageIndex{2}\): Power Delivered to a Load and Substitution Loss

This example illustrates the method for determining powers using signal flow graph analysis with generalized \(S\) parameters having reference impedances \(Z_{01}\) at Port \(\mathsf{1}\) and \(Z_{02}\) at Port \(\mathsf{2}\). This is then used to determine substitution loss. The substitution loss is the ratio of the power delivered to a load with an initial two-port, to the power delivered with the substituted final two-port network. The SFG elements are shown on the right with \(\Gamma_{S}\) referred to \(Z_{01}\) and \(\Gamma_{L}\) referred to \(Z_{02}\). 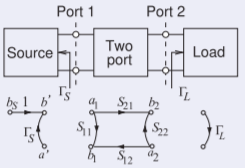 Then the power delivered to the load is (using Equation (2.4.9)) Figure \(\PageIndex{14}\): SFG manipulations in developing the power delivered to a load with a two-port network between source and load.

Mason’s rule is a general procedure for reducing SFGs with multiple loops and is a systematic procedure for the reduction of SFGs to a single branch. Mason [6] derived the formula with the aim of developing a general method for the computer analysis of electrical circuits. First, a number of topology definitions must be introduced.

A path begins at one node and traverses a number of successive edges in the direction of the arrows to arrive at the final node or sink. In SFG analysis, a path is a forward path, as the successive edges are traversed in the direction of the arrows. An open path encounters the same node only once, and a closed path (or a loop) ends on the same node at which it is started. The product of the transmittances of all edges in a loop is called the loop transmittance. Two paths, open or closed, are said to be non-touching paths if they have no nodes in common. Similarly, disjoint loops are loops that have no nodes in common.

and the determinant is given by

SFG reduction can be used with numerical values but the real power comes from the ability to develop symbolic expressions. In RF and Microwave engineering these expressions nearly always involve scattering parameters but they can be used with any sets of equations. Design is best undertaken by developing symbolic solutions as these enable optimization to be performed and insights gained as to the significance of parameters.