The frequency-dependent characteristic impedance is, with reference to Equations (3.5.13) and (3.5.12),

When dielectric loss is significant (e.g., the substrate is silicon which has appreciable conductivity), the previous formula for \(\alpha_{d}\) (Equation (3.5.26)) provides a good estimate for the attenuation when \(\varepsilon_{e}\) is replaced by the frequency-dependent effective relative permittivity, \(\varepsilon_{e}(f)\).

Frequency-dependent conductor loss, described by the conductor attenuation \(\alpha_{c}\), results from the concentration of current as frequency increases:

where \(R(f)\) is the frequency-dependent line resistance described in Section 4.2.5.

A third source of loss is radiation loss, leading to an attenuation factor, \(\alpha_{r}\). At the frequencies at which a transmission line is generally used, it is usually smaller than dielectric and conductor losses. So, in full, 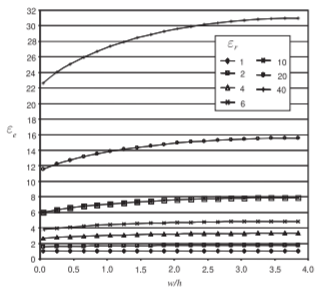 In this section, results are presented for EM simulations of microstrip lines with a variety of parameters. These simulations were performed using the Sonnet EM simulator. Figure \(\PageIndex{1}\) presents calculations of \(Z_{0}\) for various aspect ratios \((w/h)\) and substrate permittivities \((\varepsilon_{r})\) when there is no loss. The key information here is that narrow strips and low-permittivity substrates have high \(Z_{0}\). Conversely, wide strips and high-permittivity substrates have low \(Z_{0}\). The dependence of permittivity on aspect ratio is shown in Figure \(\PageIndex{2}\), where it can be seen that the effective permittivity, \(\varepsilon_{e}\), increases for wide strips. This is because more of the EM field is in the substrate.

When loss is incorporated, \(\varepsilon_{e}\) becomes complex and the imaginary components indicate loss mostly due to conductor loss. Figure \(\PageIndex{3}\) presents the frequency dependence of three microstrip lines with different substrates and aspect ratios. These simulations took into account finite loss in the conductors and in the dielectric. In Figure \(\PageIndex{3}\)(a) it can be seen that the effective permittivity, \(\varepsilon_{e}\), increases with frequency as the fields become confined more to the substrate. Also, the real part of the characteristic impedance is plotted with respect to frequency. Up to \(20\text{ GHz}\) a drop-off in \(Z_{0}\) is observed as frequency increases. This is due to both reduction of internal strip and ground inductances as charges move to the skin of the conductor and also to greater confinement of the EM fields in the dielectric as frequency increases. It is not long before the characteristic impedance increases. This effect is not due to the skin effect and current bunching that were previously described. Rather it is due to other EM effects that are only captured in EM simulation. It is a result of spatial variations being developed in the fields (related to the fact that not all parts of the fields are in instantaneous contact).