This appendix presents the essential mathematics required to describe the statistical properties of a random process such as noise. Also, it is difficult to analyze circuits with digitally modulated signals unless the signals are treated as being random with high-order statistics. Several statistical terms are introduced to describe the properties of a random variable \(X\) and how its value at one time is related to its value at other times. So \(X\) will, in general, vary with time (i.e., it can be written as \(X(t)\)) and its value at a particular time will be random.

This section presents all of the probability metrics required to describe noise, interference, and digitally modulated signals. A random process in time \(t\) is a family of random variables \(\{X(t), t ∈ T \}\), where \(t\) is somewhere in the time interval \(T\). The probability that \(X(t)\) has a value less than \(x_{1}\) is denoted by \(P\{X(t) ≤ x_{1}\}\). This is also called the cumulative distribution function (CDF), and sometimes called just the distribution function (DF):

In general, since \(X(t)\) varies with time, the CDF required to handle noise, that is, random voltages and currents, will depend on time. So the CDF used with noise and interference in communications will have two arguments, and the multivariate CDF is

Another probability metric often used is the probability density function (PDF), \(f\), which is related to the CDF as

If the random process (i.e., \(X\)) is discrete, then the probability mass function (PMF) is used for the probability that \(x\) has a particular value. The general form of the PMF is

and the general form of the PDF, used with continuous random variables, is (from Equation \(\eqref{eq:3}\)) 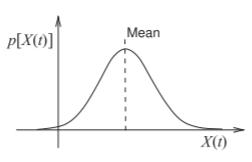 The mean is also called the first-order moment of \(X(t)\). \(E[\:\: ]\) is called the expected value of a random variable and the term is synonymous with the expectation, mathematical expectation, mean, and first moment of a random variable. The symbols \(\langle\:\:\rangle\) are a clean way of specifying the expectation. In general a computer program would need to be used to calculate the expected value. However, for some assumed probability distributions there are analytic solutions for \(E[\:\: ]\).

It is common to approximate the statistical distribution of a digitally modulated signal as a Gaussian or normal distribution. This distribution is shown in Figure \(\PageIndex{1}\) and is mathematically described by its probability distribution

When the random variable is discrete, the one-dimensional autocorrelation function of a random sequence of length \(N\) is expressed as

where \(i\) is the so-called lag parameter. The autocovariance function of \(X(t)\) is given by

while the variance is given by

\(\forall t_{i} ∈ T\), \(i ∈ \mathbf{N}\). If the random process is wide-sense stationary (WSS), then it is stationary with order \(2\). This means that in most cases only its first and second moments (i.e., the mean and autocorrelation) are independent of time \(t\) and only dependent on the time interval \(\tau\). More precisely, if a random process is WSS, then

Note that the autocorrelation of a WSS process is dependent only the time difference \(\tau\). A random process that is not stationary to any order is nonstationary (i.e., its moments are explicitly dependent on time).

The statistical measures above are those necessary to statistically describe digitally modulated signals and also describe most noise processes.