General-purpose op amps normally run on no more than \(\pm\)15 V power rails and typically produce less than 40 milliamps of output current. This makes it impossible to directly connect them to a low impedance load such as a loudspeaker or motor. The lack of high voltage capability hurts in many places, including many forms of display technology. In short, general-purpose op amps are low power devices. There are a few ways around these limitations. One way of boosting the output current capability by using a discrete follower was shown in Chapter Four. In recent years, manufacturers have produced a variety of op amps with extended power performance.

Perhaps the most immediate desire for higher current capacity op amps came from the audio community. If an op amp could be directly connected to a loudspeaker, a great deal of time and money could be saved for general-purpose audio design work. Instead of a collection of perhaps half a dozen transistors and a handful of required biasing resistors and capacitors, an audio amplifier could be produced with a single op amp and just a few resistors and capacitors. Indeed, some of the first high output devices were aimed squarely at the audio market. By 1980 it was possible to choose from a number of amplifiers designed to drive loudspeakers with power levels of 1 to 5 watts. In an effort to make designs ever easier, the strict op amp form was modified and devices with preset and programmable gains were produced. Due to the increased dissipation requirements, the standard plastic dual inline package was abandoned in favor of multi-lead TO-220 style cases. Devices have been created that can produce output currents in excess of 10 amps. Besides their use in the audio/communications area, these high current devices find use in direct motor drive applications, power supply and regulation design, and in other areas.

Let's take a closer look at a few representative devices. First, on the lower end of the scale is the LM386. This low-voltage device has been around for many years and is housed in a hobbyist-friendly 8 pin mini DIP. It operates from a single power supply between 4 and 12 V and is capable of producing 0.8 W into a 16 \(\Omega\) load with 3% THD. The gain is set internally to 20, but can be increased up to 200 with the addition of a few extra components. A minimum configuration layout requires only one external component, as shown in Figure \(\PageIndex{1}\). In the minimum configuration the PSRR bypass capacitor is omitted. This produces a PSRR of less than 10 dB. A more respectable PSRR of 50 dB can be achieved by adding a 50 \(\mu\)F capacitor from the PSRR bypass pin to ground. The small number of required external components is due to the fact that an internal feedback path has already been established by the manufacturer. Normally, this device would not be set up in the forms we have already examined. Configured as in Figure \(\PageIndex{1}\), the circuit exhibits a 300 kHz bandwidth and an input impedance of 50 k\(\Omega\). 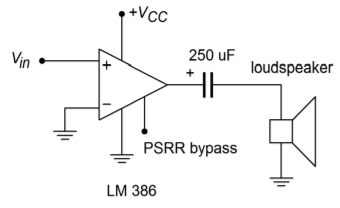 A typical application using the LM386 is shown in Figure \(\PageIndex{2}\). This is a personal amplifier called The Pocket Rockit. It is designed for musicians, so that they can plug a guitar, keyboard, or other electronic instrument into the unit and hear what they play through a pair of headphones. It is in essence, a personal practice amp. In keeping with its small portable design, The Pocket Rockit runs off of a single 9 volt battery. Note how the single supply biasing techniques explained in Chapter Four are used to bias op amps 1a and 1b. The circuit is laid out in three main blocks. The first block serves as a pre-amplifier and distortion circuit. Because the load for the first stage consists of a pair of diodes, \(D_2\) and \(D_3\), large output signals will be clipped at the diode forward voltage. Normally, clipping is not a desired result in linear circuit design but it can be aesthetically pleasing, particularly when applied to guitar. (This is one case where subjective valuations can make a designer do rather odd things.) The second stage comprises a bass/mid/treble control. This is little more than a frequency selective amplifier, a subject that will be covered in detail in Chapter Eleven. From the musician's view, it allows control over the tone color, or timbre, of the sound. The final stage utilizes an LM386 to drive a pair of mini headphones. As you can see, the power amplifier section is the smallest of the three. It utilizes the default internal gain of 20, and includes \(C_{20}\) for optimum PSRR. This is an important detail, as this circuit may also be powered from 9 V AC adapters, which are not known for their low noise. The volume control is merely a potentiometer that acts as a voltage divider to the input signal. Coupling capacitors are used throughout to prevent DC bias signals from affecting the load or adjacent stages. They are also used to make sure that DC potentials don't appear across the potentiometers, which can increase adjustment noise. A nice potential upgrade of the design would replace the LM386 with the more efficient LM4951 (1.8 watts into 8 \(\Omega\)). This IC offers low current shut down mode, internal circuitry to mute power on/off transients and is unity gain stable.

Another possibility is to use the section prior to the volume control as the front end of a more traditional instrument amplifier. In this instance the LM386 could be replaced with a much more powerful device such as the similarly named LM3886 along with an appropriately upgraded DC power supply. The LM3886 offers an average output power of 38 watts into an 8 \(\Omega\) load with no more than 0.1% THD across the audio spectrum of 20 Hz to 20 kHz when operated from a \(\pm\)28 volt supply and 68 watts when driving a 4 \(\Omega\) load. It features output short circuit protection, input mute and power supply turn on/turn off “pop” protection. It comes in an extended TO-220 case. An example amplifier is shown in Figure \(\PageIndex{3}\). Still further along is the Apex PA05. This is a very high current device capable of producing 30 amps and can run with power supplies as high as \(\pm\)50 volts. Internal power dissipation is 250 watts and resistor-programmable current limit is available. Obviously, with the sort of power dissipation this device is capable of, appropriate cooling methods, such as heat sinks, cannot be overlooked.

While the PA05 can be used as an audio power amplifier, there are many other application areas in which it might fit. One example is the sonar drive circuit shown Figure \(\PageIndex{4}\). Here the sonar transducer is driven via a tuned transformer. The circuit is a parallel-parallel inverting configuration. \(R_{CL}\) is the current limit sense resistor. Sometimes an amplifier needs to deliver output voltages in excess of the 12 to 13 V limits presented by most op amps. In this case, you may turn to a number of highvoltage op amps. These devices do not necessarily have a higher output-current capability as well. Basically, they may be treated as general-purpose op amps that may be operated from higher supply voltages. Because of this, their output compliance is increased. Devices are available that may operate from power supplies well in excess of \(\pm\)100 V.

One example of this breed is the Apex PA85. The PA85 runs from power supplies as high as \(\pm\)225 volts. The output current limit is typically 200 mA. The device is also quite fast with a gain-bandwidth product of 100 MHz and a typical slew rate of 1000 V/\(\mu\)s. The high output voltage capability makes this IC ideal for driving piezoelectric or electrostatic transducers.