Find the complex Fourier series representations of the following signals without explicitly calculating Fourier integrals. What is the signal's period in each case? Find the Fourier series representation for the following periodic signals. For the third signal, find the complex Fourier series for the triangle wave without performing the usual Fourier integrals. Hint: How is this signal related to one for which you already have the series?

We can learn about phase distortion by returning to circuits and investigate the following circuit.

Often, we want to approximate a reference signal by a somewhat simpler signal. To assess the quality of an approximation, the most frequently used error measure is the mean-squared error. For a periodic signal s(t),

One convenient way of finding approximations for periodic signals is to truncate their Fourier series.

The daily temperature is a consequence of several effects, one of them being the sun's heating. If this were the dominant effect, then daily temperatures would be proportional to the number of daylight hours. The plot shows that the average daily high temperature does not behave that way. In this problem, we want to understand the temperature component of our environment using Fourier series and linear system theory. The file temperature.mat contains these data (daylight hours in the first row, corresponding average daily highs in the second) for Houston, Texas. Let the length of day serve as the sole input to a system having an output equal to the average daily temperature.

Find the Fourier or inverse Fourier transform of the following: Pulse sequences occur often in digital communication and in other fields as well. What are their spectral properties?

Simple circuits can implement simple mathematical operations, such as integration and differentiation. We want to develop an active circuit (it contains an op-amp) having an output that is proportional to the integral of its input. For example, you could use an integrator in a car to determine distance traveled from the speedometer.

Where is that sound coming from?

We determine where sound is coming from because we have two ears and a brain. Sound travels at a relatively slow speed and our brain uses the fact that sound will arrive at one ear before the other. As shown below, a sound coming from the right arrives at the left ear τ seconds after it arrives at the right ear. Once the brain finds this propagation delay, it can determine the sound direction. In an attempt to model what the brain might do, RU signal processors want to design an optimal system that delays each ear's signal by some amount then adds them together. Δl and Δr are the delays applied to the left and right signals respectively. The idea is to determine the delay values according to some criterion that is based on what is measured by the two ears.

Architecting a system of modular components means arranging them in various configurations to achieve some overall input-output relation.

be the input to a linear, time-invariant filter having the transfer function shown below.

Reverberation corresponds to adding to a signal its delayed version.

A frequently encountered problem in telephones is echo. Here, because of acoustic coupling between the ear piece and microphone in the handset, what you hear is also sent to the person talking. That person thus not only hears you, but also hears her own speech delayed (because of propagation delay over the telephone network) and attenuated (the acoustic coupling gain is less than one). Furthermore, the same problem applies to you as well: The acoustic coupling occurs in her handset as well as yours.

In most patients, it takes time for the concentration of an administered drug to achieve a constant level in the blood stream. Typically, if the drug concentration in the patient's intravenous line is

the concentration in the patient's blood stream is

RU Electronics has been contracted to design a Doppler radar system. Radar transmitters emit a signal that bounces off any conducting object. Signal differences between what is sent and the radar return is processed and features of interest extracted. In Doppler systems, the object's speed along the direction of the radar beam is the feature the design must extract. The transmitted signal is a sinsusoid:

where the Doppler offset frequency Δf equals 10v where v is the car's velocity coming toward the transmitter.

Demodulating an AM Signal

Let m(t) denote the signal that has been amplitude modulated.

Radio stations try to restrict the amplitude of the signal m(t) so that it is less than one in magnitude. The frequency fc is very large compared to the frequency content of the signal. What we are concerned about here is not transmission, but reception. The so-called coherent demodulator simply multiplies the signal x(t) by a sinusoid having the same frequency as the carrier and lowpass filters the result.

We want to send a band-limited signal having the depicted signal with amplitude modulation in the usual way. I.B. Different suggests using the square-wave carrier shown below. Well, it is different, but his friends wonder if any technique can demodulate it. 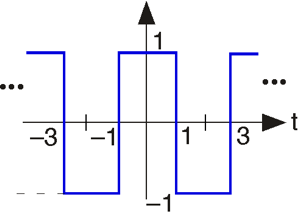 While sitting in ELEC 241 class, he falls asleep during a critical time when an AM receiver is being described. The received signal has the form:

Sid Richardson college decides to set up its own AM radio station KSRR. The resident electrical engineer decides that she can choose any carrier frequency and message bandwidth for the station. A rival college decides to jam its transmissions by transmitting a high-power signal that interferes with radios that try to receive KSRR. The jamming signal jam(t) is what is known as a sawtooth wave (as shown below) having a period known to KSRR's engineer.

A stereophonic signal consists of a "left" signal l(t) and a "right" signal r(t) that conveys sounds coming from an orchestra's left and right sides, respectively. To transmit these two signals simultaneously, the transmitter first forms the sum signal:

and the difference signal

Then, the transmitter amplitude-modulates the difference signal with a sinusoid having frequency 2W, where W is the bandwidth of the left and right signals. The sum signal and the modulated difference signal are added, the sum amplitude-modulated to the radio station's carrier frequency fc, and transmitted. Assume the spectra of the left and right signals are as shown.

A clever engineer has submitted a patent for a new method for transmitting two signals simultaneously in the same transmission bandwidth as commercial AM radio. As shown below, her approach is to modulate the positive portion of the carrier with one signal and the negative portion with a second.

In detail the two message signals m1(t) and m2(t) are bandlimited to W Hz and have maximal amplitudes equal to 1. The carrier has a frequency fc much greater than W. The transmitted signal x(t) is given by:

In all cases, 0<a<1. The plot shows the transmitted signal when the messages are sinusoids:

An ELEC 241 student has the bright idea of using a square wave instead of a sinusoid as an AM carrier. The transmitted signal would have the form:

where the message signal m(t) would be amplitude-limited: |m(t)|<1

An amplitude-modulated secret message m(t) has the following form:

An excited inventor announces the discovery of a way of using analog technology to render music unlistenable without knowing the secret recovery method. The idea is to modulate the bandlimited message m(t) by a special periodic signal s(t) that is zero during half of its period, which renders the message unlistenable and superficially, at least, unrecoverable (see figure below).