Piping and Instrumentation Diagrams (P&IDs) use specific symbols to show the connectivity of equipment, sensors, and valves in a control system. These symbols can represent actuators, sensors, and controllers and may be apparent in most, if not all, system diagrams. P&IDs provide more detail than a process flow diagram with the exception of the parameters, i.e. temperature, pressure, and flow values. "Process equipment, valves, instruments and pipe lines are tagged with unique identification codes, set up according to their size, material fluid contents, method of connection (screwed, flanged, etc.) and the status (Valves - Normally Closed, Normally Open)."[1] These two diagrams can be used to connect the parameters with the control system to develop a complete working process. The standard notation, varying from letters to figures, is important for engineers to understand because it a common language used for discussing plants in the industrial world.

P&IDs can be created by hand or computer. Common programs, for both PC and Mac, that create P&IDs include Microsoft Visio (PC) and OmniGraffle (Mac). As with other P&IDs, these programs do not show the actual size and position of the equipment, sensors and valves, but rather provide a relative positions. These programs are beneficial to produce clean and neat P&IDs that can be stored and viewed electronically. See below for P&ID templates for these programs.

Line symbols are used to describe connectivity between different units in a controlled system. The table describes the most common lines.

In Table 1, the "main process" refers to a pipe carrying a chemical. "Insulated" is straightforward, showing that the pipe has insulation. "Trace heated" shows that the pipe has wiring wrapped around it to keep the contents heated. "Lagged" indicates on a P&ID that the pipe is wrapped in a cloth or fiberglass wrap as an alternative to painting to improve the appearance of the pipe see here for more information. The last column in Table 1 shows pipes that are controlled by a controller. "Electrical impulse" shows that the manner in which information is sent from the controller to the the pipe is by an electrical signal, whereas "pneumatic impulse" indicates information sent by a gas.

In addition to line symbols, there are also line labels that are short codes that convey further properties of that line. These short codes consist of: diameter of pipe, service, material, and insulation. The diameter of the pipe is presented in inches. The service is what is being carried in the pipe, and is usually the major component in the stream. The material tells you what the that section of pipe is made out of. Examples are CS for carbon steel or SS for stainless steel. Finally a 'Y' designates a line with insulation and an 'N' designates one without it. Examples of line short codes on a P&ID are found below in Figure A.

This is useful for providing you more practical information on a given pipe segment.

For example in stream 39 in Figure A, the pipe has a 4" diameter, services/carries the chemical denoted 'N', is made of carbon steel, and has no insulation.

For example, the symbol “PI,” is a “pressure indicator.”

The following symbols are used to represent valves and valve actuators in a chemical engineering process. Actuators are the mechanisms that activate process control equipment.

Instruments can have various locations, accessibilities, and functionalities in the field for certain processes. It is important to describe this clearly in a P&ID. Below is a table of these symbols commonly used in P&IDs. Transmitters play an important role in P&IDs by allowing the control objectives to be accomplished in a process. The following are commonly used symbols to represent transmitters.

Below are three examples of flow transmitters. The first is using an orifice meter, the second is using a turbine meter, and the third is using an undefined type of meter.

The following symbols are used to represent other miscellaneous pieces of process and piping equipment.

In order to greatly simplify P&ID diagrams for the purposes of this class, a standard convention must be employed. This convention simplifies the many control devices that need to be used. For the sake of brevity, sensors, transmitters, indicators, and controllers will all be labeled on a P&ID as a controller. The type of controller specified (i.e. temperature or level) will depend on the variable one wished to control and not on the action needed to control it.

As you can see on the P&ID above, these controllers are represented as circles. Furthermore, each controller is defined by what it controls, which is listed within arrow boxes next to each controller. This simplifies the P&ID by allowing everyone the ability to interpret what each controller affects. Such P&IDs can be constructed in Microsoft Office Visio.

Below is a sample P&ID Diagram that is actually used in an industrial application. It is clearly more complicated than what has been detailed above, however, the symbols used throughout remain the same. 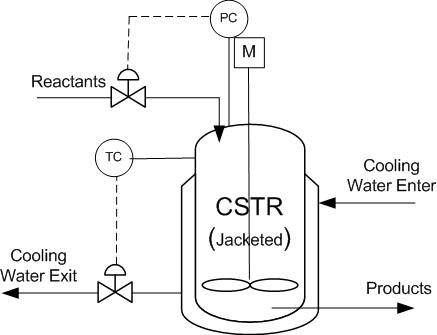 Answer: Reactants enter a jacketed CSTR where a reaction takes place and the products exit. The reactor is cooled via a coolant water stream. The temperature inside the reactor vessel is monitored with a temperature controller (also contained in the controller is a sensor, indicator, and transmitter), which electrically controls a valve. The valve can alter the flowrate of the coolant water stream, thereby controlling the temperature inside the reactor. A pressure controller is also present which feeds back to an inlet valve. Therefore, we can deduce that this reaction is most likely gas phase and if the CSTR becomes too full (high pressure) the inlet valve will close.

Draw a proper P&ID diagram of the following process: Below is a P&ID diagram of the transesterification process to produce biodiesel. Soybean oil, methanol, and the sodium methoxide catalyst are pumped in to the reactor. The temperature of the reactor is regulated by the circulation water. The resulting biodiesel is then pumped out of the reactor and goes on to other processes so that it can be sold. Below is a P&ID of the process that is missing the valves, pumps, and sensors. Add the pumps, sensors, and valves that are needed to successfully control the process. 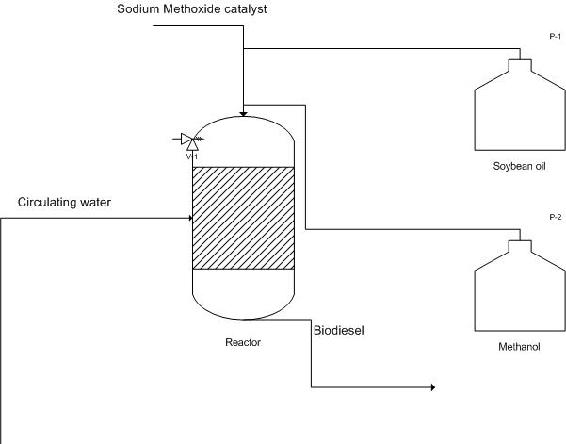 Below is a example problem of a typical P&ID problem. A is a liquid at Tamp but boils at Trx. B and P are high boiling point liquids and C is a solid. The reaction for the process is 2A+B+C-->P at Trx. Ais fed in excess. 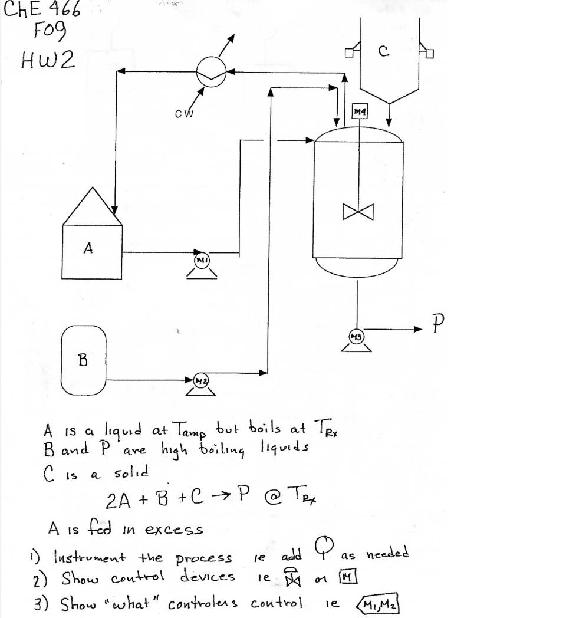 Below is the solution to the problem above. A Brief Guide To Piping and Instrumentation Diagram Standard Notation

Here are templates for creating P&IDs in Visio (PCs) and OmniGraffle (Mac).