Feed-forward control is a useful tool in the field of chemical engineering when there is a known set of deviations occurring upstream of the system. This would allow engineers to account for that particular deviation within the controller and reduce the effects of the deviation on the system. An example would be a car's cruise-control system. If it has feedback control, when there is a slope and therefore a speed reduction, the feedback controller would compensate by applying additional throttle to the engine. If it uses a feed-forward controller instead, the controller would calculate the slope beforehand and throttle the engine before any speed reduction occurs. In this sense, the controller predicts the incoming deviation and compensates for it.

The following block diagram shows a feed-forward controller implemented on a idealized process with a setpoint \(R\) and load \(U\): The perfect feed-forward controller is the inverse of the process operator, \(\hat{G}_{P}^{-1}\)

(in the language of operator or state space).

The objective of feed-forward control is to measure disturbances and compensate for them before the controlled variable deviates from the setpoint. Feed-forward control basically involves a control equation which has certain corrective terms which account for predicted disturbances entering the system. The equation is only effective for gains in a steady state process. Dynamic compensation should be used in the control equation if there are any dynamic deviations with the process response to the control action. This dynamic compensation ability will be discussed further in the next section.

One form of a feed-forward control would be a Derivative (D) control which calculates the change in error and compensates proportionately. But a D-control can’t perform by itself and usually requires working in conjunction with a Proportional (P) or Proportional Integral (PI) control. More information can be found in the PID Intro article.

Simulated below is a typical shell and tube heat exchanger which heats up liquid water using steam. Adding a feed-forward control into the system manipulates the amount of steam required to compensate for the varying amounts of liquid feed coming in. Heat into the system is equal to the heat leaving the system.

Often, one of the most difficult tasks associated with created a functional feed forward controller is determining the necessary equations that govern the system. Even more complexities arise when the system is not, and cannot be treated as, ideal. This is the case with many real and practical systems. There is simply too much heat lost or too many unforeseen effects to safely assume ideal conditions. The pure math of the example above does not account for these effects.

The equations will output a value to a control valve (often in voltage). That voltage will be derived from some previously determined relationship between voltage, valve %open, and steam flow rate. A very simple way to begin managing the issue of non-ideality is by including a "non-ideality constant". This can be an additive or a multiplicative constant that adjusts the voltage output determined by the equations.

This non-ideality constant \(c_N\) often must be determined by trial. One way to accomplish this is to use manual control to determine the output voltage needed at various inlet conditions. Using the data from the manual trials, and the resulting voltage that your unadjusted feed forward controller would output, it is possible to determine by what factor your feed forward voltage needs to be adjusted. For example, if by manual control you determine that for inlet conditions X the required voltage is 300 mV and your feed forward controller is only outputting 270 mV for conditions X, you need some factor to adjust.

It may also happen that your "non-ideality constant" will not turn out to be constant when you begin to look at the data. In this situation, consider using a linear relationship between the non-ideality factor and some inlet condition or implementing CASE or IF statements covering discrete ranges of inlet conditions and giving different constants.

Dynamic compensation is a method to account for factors such as lead and lag times when using feed-forward control. For instance, in the example above, when the feed forward controller monitors a temperature decrease in the liquid feed, it will increase the steam flow rate - the manipulated variable - to compensate and thus maintain the temperature of the exiting liquid flow - the controlled variable. However, the steam may enter the heat exchanger faster than the liquid feed and this will cause a transient increase in the controlled variable from the setpoint. In an ideal case the steam and liquid feed would enter the heat exchanger at the same time and no deviation from the set exiting temperature would be observed. Therefore, dynamic compensation involves predicting non-ideal behavior and accounting for it. While perfect feed-forward control is nearly impossible, dynamic compensation is one step closer.

Because a feed-forward controller listens to the system and calculates adjustments without directly knowing how well the controlled variable is behaving (if it does, it is getting feedback), it is open loop in nature. In other words, the controller operates on "faith", that its mathematical models are able to accurately generate responses (valve setting, motor speed, etc.) that lead to expected results. Therefore, it is critical to implement good models in feed-forward systems. This is often the most difficult part of a feed-forward design, as mentioned previously.

This simple open loop system is an example of a open loop system that is not feed-forward. The controller simply takes the current state of the controlled variable to generate a valve setting. It is not getting a feedback, because the product temperature is not compared to a set pont. It is not feed-forward either, because there is no mechanism that produces actions that may yield expected results in the future.

Feed-forward control is used in many chemical engineering applications. These include heat exchangers, CSTRs, distillation columns and many other applications. A typical furnace, shown below, is heating up an input fluid using fuel gas. Different applications require different types of control strategies. Sometimes feed-forward solutions are required for proper system control; sometimes only feedback solutions are necessary. Feedback systems don’t always maintain the setpoint as well because of the lag that comes with waiting for the disturbance to propagate through the system. As a result, many control systems use a combination of feed-forward and feedback strategies, such as PID controllers. PID controllers use the Proportional-Integral control for feedback and the Derivative control for feed-forward control. This forms a system with multiple loops, otherwise known as a cascading system. A critical advantage of running both forward and backward controls is that the system is still somewhat able to adjust a variable if one mechanism fails since the two loops use different sensors. As a result, PID controllers are great for controlling processes, however, they require a number of equations to determine feed-forward and feedback correction.

Feed-forward systems work by checking the conditions of an incoming stream and adjusting it before the system is adversely affected. If the controller is told the traits of an acceptable incoming stream, then it can compare that standard to whatever is coming down the pipe. The feed-forward controller can look at this error and send a corrective signal to the automatic valve responsible for that pipe (or any other control device). In order to have this kind of predictive ability, the controller must have explicitly defined equations that account for the effects of a disturbance on the system. In addition, these equations must also then prescribe action to counter-act the disturbance. This can become even more difficult when there are several incoming stream traits that are being observed. When there are multiple inputs, the feed-forward system will require non-linear equations, leading to the development of neural networks.

Neural networks are based on “neurons”, which are representations of non-linear equations. This concept is based on the brain's use of neurons to process and transmit information. The neuron is actually comprised of a set of sigmoidal equations relating inputs to outputs. Sigmoid functions are non-linear equations that take inputs and apply constants, or weights, to transform the value to make an output. Below is a picture that illustrates the function that these neurons serve.

The picture above shows a multiple input-output system. Most feed-forward systems have to deal with more than one input.

Neurons can be “connected” in ways that allow the inputs to be transformed any number of times. Neurons that are connected indicate that one sigmoidal function's output becomes the input of another one. Although the concept of neurons is easily understandable, the difficulty lies in the potential complexity of real systems. For example: the number and type of inputs go to which neurons, the initial weights be, the number of neurons needed, etc. As you can see, there are a lot of design questions that make developing the neural network difficult.

Coupled with an expected set of upstream conditions, the feed-forward system can continually adjust the method it uses to control an output variable. The system is capable of doing this by measuring sensor inputs coming into the controller, using neurons to transform the data, and comparing the resulting output(s) to a set of known or desired outputs. If the actual output is different from the desired output, the weights are altered in some fashion and the process repeats until convergence is achieved. This is how a controller is able to "learn". Learning is just discovering the weighting factors that allow the transformed ouputs to match the desired outputs.

The following table shows a list of feed-forward pros and cons:

A CSTR with a given volume with heat-exchange capability has a coolant water system to maintain a specific system temperature (368K). To maintain this temperature, the flow of coolant water oscillates. Let a temperature disturbance of 100K be introduced over a period of 10 minutes. For this simulation, the Excel spreadsheet from PID-Tuning Optimization was used to create feed-forward and feed-backward data. In the following plot, observe the difference between using feed-forward control versus feed-backward control in an example. As shown, the feed-forward strategy works more effectively than the feed-backward strategy at nullifying the disturbance (over the time frame). The temperatures reached in feedback mode vary more than the ones seen in feed-forward mode. However, the controller response is solely defined by the parameters used in the Excel spreadsheet. If one assumes that the PID parameters used by the PID-optimization group were optimized, then we can say feed-forward would be the best option here. Determine what additional input will be needed to regulate the amount of steam produced and draw this on the design diagram.

By regulating the heating coil, we can regulate how much water will boil off in accordance with any change of the feed stream. For the second example, a particular process liquid from a previous reaction will be heated before proceeding to the next phase of reactions. A shell and tube heat exchanger has been installed for this purpose with steam providing the heat duty. A feedback controller is used to control the output temperature of the process liquid stream, but the flowrate and the temperature of the input liquid stream vary too much for the feedback controller to be effective. 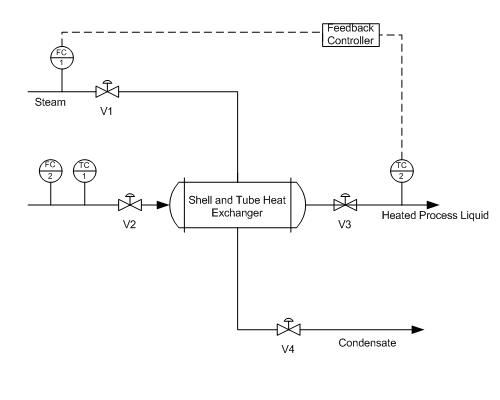 What sort of controller would be appropriate in addition to the feedback controller to account for the deviations of the input liquid stream? How would this controller be implemented? For simplicity it is assumed that all the steam condenses. 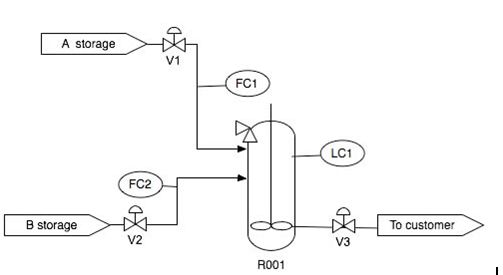 To maintain LC1 by measuring FC1 and FC2 and preemptively adjust v3, we must use the controller expression below.

The controller expression above assumes that the valve is linear. Also, it assumes that FC1, FC2, and the model are infinitely accurate.