The application of control networks to engineering processes requires an understanding of the relationships between system variables. One would expect, for example, to find a relationship between the steam flow rate to a heat exchanger and the outlet stream temperature. How, then, are engineers to quantify the degree of relation between a pair of variables? Often times, investigations into the correlation and mutual information of data sets can provide the answer. Correlation analysis provides a quantitative means of measuring the strength of a linear relationship between two vectors of data. Mutual information is essentially the measure of how much “knowledge” one can gain of a certain variable by knowing the value of another variable. By utilizing these techniques, engineers can increase the selectivity and accuracy of their control systems.

That is, the covariance of the two variables divided by the product of their standard deviations. Covariance serves to measure how much the two random variables vary together. This will be a positive number if both variables consistently lie above the expected value and will be negative if one tends to lie above the anticipated value and the other tends to lie below. For a further description of covariance, as well as how to calculate this value, see Covariance on Wikipedia.

are the sample averages, and sx and sy are the samples’ standard deviations. This correlation coefficient will still take on values from 1 to -1, corresponding to the strength of linearity in the same way as the population correlation coefficient. This expression is often the more useful for process controls applications; an engineer can measure two variables, calculate their means and standard deviations, and ultimately determine the validity of a linear relationship between the two. This method is extremely useful when applied to a sample of experimental data that can be modeled by a normal distribution function. It is simpler and easier to use compared to the population correlation coefficient because it uses only well defined statistical inputs, mean and standard deviation, rather than the complex covariance function.

The correlation coefficient indicates the strength of a linear relationship between two variables with random distribution; this value alone may not be sufficient to evaluate a system where these assumptions are not valid. 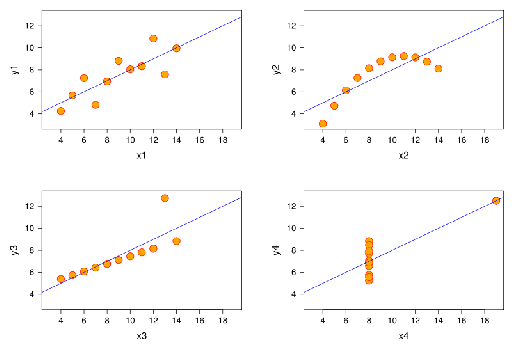 However, as can be seen on the plots, the distribution of the variables is very different.

These examples indicate that the correlation coefficient alone should not be used to indicate the validity of a linear fit.

Measuring the correlation of system variables is important when selecting manipulated and measured control pairs. Say, for instance, that an engineer takes several measurements of the temperature and pressure within a reactor and notes that the data pairs have a correlation coefficient of approximately one. The engineer now understands that by applying a control system to maintain the temperature, he will also be controlling the reactor pressure by way of the linear relationship between the two variables.

Here we begin to see the role correlations play in defining MIMO versus SISO systems. Generally, engineers seek control systems with independent pairs of manipulated (u) and measured variables (x). If two inputs strongly influence a single output as measured by the correlation value, then the system will be difficult to decouple into a SISO controller. Correlation values closer to 0 for all but one manipulated variable means the system will be easier to decouple because here a single system input controls a single system output and there is limited effect on other process variables.

Correlation coefficients can be quickly calculated with the aid of Mathematica. To illustrate by example, suppose that an engineer measures a series of temperatures inside a bacterial chemostat and the corresponding protein concentration in the product. She measures temperatures of 298, 309, 320, 333, and 345 K corresponding to protein concentrations of 0.4, 0.6, 0.7, 0.85, and 0.9 weight percent protein (these values are for illustrative purposes and do not reflect the performance of an actual chemostat). The engineer enters these measurements into Mathematica as a pair of vectors as follows:

Mutual information (also referred to as transinformation) is a quantitative measurement of how much one random variable (Y) tells us about another random variable (X). In this case, information is thought of as a reduction in the uncertainty of a variable. Thus, the more mutual information between X and Y, the less uncertainty there is in X knowing Y or Y knowing X. For our purposes, within any given process, several parameters must be selected in order to properly run the process. The relationship between variables is integral to correctly determine working values for the system. For example, adjusting the temperature in a reactor often causes the pressure to change as well. Mutual information is most commonly measured in logarithms of base 2 (bits) but is also found in base e (nats) and base 10 (bans).

The mathematical representation for mutual information of the random variables A and B are as follows:

For a review and discussion of probability distribution functions, please refer to Probability Distribution (Wikipedia).

When referring to continuous situations, a double integral replaces the double summation utilized above.

For a review and discussion of probability density functions, please refer to Probability Density Function (Wikipedia).

By performing the functions above, one measures the distance between the joint distribution/density functions of A and B. Since mutual information is always measuring a distance, the value obtained from this calculation will always be nonnegative and symmetric. Therefore,

In both cases, the information shared between both A and B is being measured. If A and B are independent of each other, then the difference between the two would be zero. In terms of chemical engineering processes, two independent variables would share no mutual information which means that one variable provides no information about the other variable. If A and B were identical, then all the information derived from obtaining variable A would supply the knowledge needed to get variable B.

By knowing the mutual information between two variables A and B, modeling of a multivariable system can be accomplished. If two or more variables provide the same information or have similar effects on one outcome, then this can be taken into consideration while constructing a model. For example, if the level of a tank was observed to be too high, pressure and temperature could be plausible variables. If manipulating both of these variables causes a change in the fluid level in the tank, then there exists some mutual information between the pressure and temperature. It would then be important to establish the relationship between temperature and pressure to appropriately control the level of fluid in the tank.

Relating Mutual Information to Other Quantities/Concepts

In terms of probability theory, the relative entropy of a system measures the distance between two distinct probability functions. In chemical engineering applications, mutual information can be used to determine the entropy inherent in a system. Mutual information in this aspect can now be defined simply as:

As described above, the marginal entropy still represents the uncertainty around a given variable A and B. Conditional entropy describes the uncertainty in the specified variable that remains after the other variable is known. In terms of mutual information, the conditional entropies of A and B tell us that a certain number of bits needs to be transferred from A in order to determine B and vice versa. Once again, these bits of information are determined by the logarithmic base chosen for analysis. One can determine the uncertainty in several different process parameters with respect to any other process variable.

Recall that via Boolean Models, a complex series of sensors and valves can be modeled into a simple control system. A Boolean variable, however, will never return a value because it can only return True or False. This knowledge can be combined to determine a relationship between two different variables (from Boolean model) and then their dependency can be quantified (mutual information). Utilizing the same logic that goes into constructing truth tables, data can be input into tables to determine the mutual information value.

Suppose an engineer wants to test the applicability of the ideal gas law to a closed tank containing a fixed amount of his company’s gaseous product. Given that the vessel is of constant volume, and given that no change in moles will occur in this fixed system, one would hypothesize that the ideal gas law would predict a linear relationship between the temperature and pressure within the tank. The engineer makes the following measurements and notes his findings in Excel.

Before proceeding with his analysis, the engineer decides to calculate the correlation coefficient for these values in Mathematica.

Noting the correlation coefficient’s approximate value of 1, the engineer proceeds by creating a linear fit of the data in Excel. Indeed, the data are nearly linear.