The p-n junction has two important open-circuit properties -- that is, properties that arise when there are no external connections to the device. These are the barrier potential and the ​space-charge region. These properties emerge from the interactions among free electrons and holes in the n- and p-type sections. 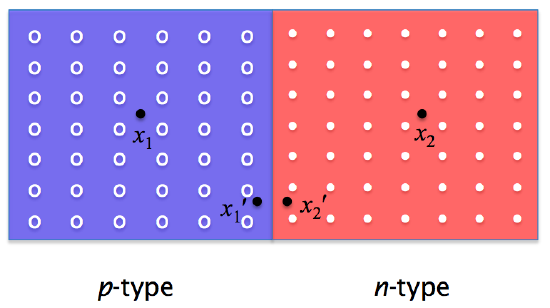 According to Bobrow1, the formula for the voltage difference across a hole gradient is the following:

where VT = T / 11,586 ( = 0.0259 at room temperature of T = 300 K), p1 is the hole concentration at x1, and p2 is the hole concentration at point x2. Note that this formula depends only on the difference in hole concentration between the two points and not the distance separating them; therefore, if we assume the hole and electron concentrations are constant throughout the p-type and n-type sections, respectively, we can see that the exact same voltage difference would be found between points x1' and x2' as between x1 and x2. Furthermore, we could move x1' and x2' arbitrarily close to the junction line and still find the same voltage. Therefore, the voltages within the p- and n-type materials must be constant, and the difference must occur only at the junction line.

Therefore, the hole concentration in the n-type section is p = ni2/n. Since the free electron concentration is approximately equal to the donor atom concentration ND, we have p = ni2/ND, an expression which contains all easily measureable quantities. Plugging these expressions for p1 and p2 into Bobrow's equation, we find:

This is the formula for the barrier potential of a p-n junction. Note that this is the voltage difference in the direction from n-type towards p-type. In reality, the hole and electron concentrations will not be constant throughout the material and will decrease as you move towards the junction line. However, the approximations made here still produce a formula for the barrier voltage that is reasonably accurate with empirical results.

Consider again the locations and concentrations of charge carriers within the p- and n-type material. The p-type material will have a high concentration of holes and low concentration of free electrons, and vice versa for the n-type material. But any time particles are contained in a crowded environment, they will naturally diffuse out of that environment. Therefore, this steep concentration gradient will result in the diffusion of majority carriers across the junction line -- holes will diffuse into the n-type side and free electrons will diffuse into the p-type side. The free electrons will recombine with the holes, leaving this area depleted of charge carriers. This area is called the space-charge region, or the depletion region. 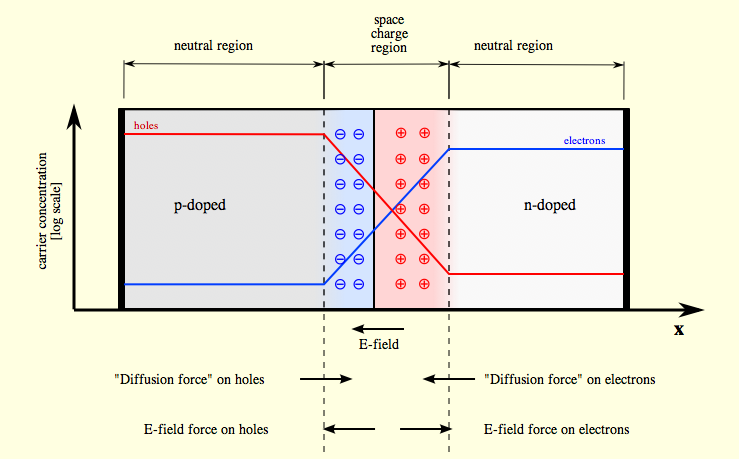 The diffusion of electrons and holes across the junction line creates uncovered ions in the space-charge region. These ions
create an electric field within the material, which further affect the carriers (explained below). Image courtesy of Wikimedia Commons.

The electric field resulting from the uncovered ions in the space-charge region will tend to push free electrons back into the n-type material and holes back into the p-type material. This force, which opposes diffusion, is called "drift". Drift gets stronger as diffusion increases, so it will prevent all the majority carriers from diffusing across the junction line. The charges will eventually orient themselves in such a manner that the diffusive and drift forces are exactly opposite.