The ideal diode equation is an equation that represents current flow through an ideal p-n junction diode as a function of applied voltage. In realistic settings, current will deviate slightly from this ideal case.

As seen in the previous sections, a p-n junction diode creates the following current: under reverse bias, there is a small, constant reverse current, and under forward bias, there is a forward current that increases with voltage. The current-voltage function (also called the "i-v characteristic") for an ideal diode is

where IS is the reverse saturation current, v is the applied voltage (reverse bias is negative), VT = T / 11,586 is the volt equivalent of temperature, and η is the emission coefficient, which is 1 for germanium devices and 2 for silicon devices. Note that i is defined as positive when flowing from p to n. This is also called the Shockley ideal diode equation or the diode law. Note also that for v ≤ VZ, the diode is in breakdown and the ideal diode equation no longer applies; for v ≤ VZ, i = -∞. The ideal diode i-v characteristic curve is shown below: 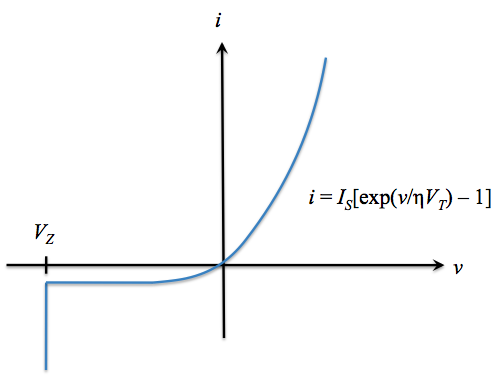 A number of approximations of diode behavior can be made from the ideal diode equation. The simplest approximation to make is to represent the diode as a device that allows no current through -- that is, it acts as an open circuit -- under reverse bias, and allows an unlimited amount of current through -- a closed circuit -- under forward bias. In this simplified model, the current-voltage relation (also called the "i-v characterstic") is an infinite step function:

This characteristic is depicted below: This approximation is used in circuit analysis, as we will see in the next section.