Analysis of series-parallel networks involves recognizing those sub-circuits that are in series or that are in parallel among themselves, performing simplifications as needed, and winding up with a simple series-only or parallel-only equivalent. Then the various laws such as Ohm's law, KVL, KCL, VDR and CDR are applied to the various simplified networks to determine the parameters of interest. There is no single solution technique, each circuit being unique.

Let's begin by considering the circuit of Figure 5.4.1 . To review, this is neither just a series circuit nor just a parallel circuit. If it was a series circuit then the current through all components would have to be same, that is, there would no nodes where the current could divide. This is clearly not the case as the current flowing through \(R_1\) can divide at node \(b\), with one portion flowing down through \(R_2\) and the remainder through \(R_3\). On the other hand, if it was strictly parallel, then all of the components would have to exhibit the same voltage and therefore there would be only two connection points in the circuit. This is also not the case as there are three such points: \(a\), \(b\) and ground.

What is true is that resistors \(R_2\) and \(R_3\) are in parallel. We know this because both components are attached to the same two nodes, \(b\) and ground, and must exhibit the same voltage, \(V_b\). As such, we can find the equivalent resistance of this pair and treat the result as a single resistance, let's call it \(R_x\). In this newly simplified circuit, Rx is in series with \(R_1\) and the source, \(E\). We have reduced the original circuit down to a simple series circuit and thus the series analysis rules may be applied.

Another solution path would be to apply the voltage divider rule to \(R_1\) and \(R_x\) in order to derive the two voltage drops (or the rule can be applied to find just one of the drops and the other voltage may be found by subtracting that from the source, an application of KVL). Once the voltages are determined, Ohm's law can be used to find the currents. If powers are needed, they are easily determined once the voltages and currents are found.

As we are only interested in finding one voltage, the voltage divider rule is a good candidate. The 1 k\( \Omega \) is in parallel with the 3 k\( \Omega \), yielding an equivalent resistance of 750 \( \Omega \). From here we apply VDR.

Figure 5.4.3 : Circuit for Example 5.4.1 with polarities and directions included.

We can go further and verify the currents via KCL. For the first parallel resistor we find:

And for the second resistor we see:

Obviously, these sum to the entering current of 6 mA. This current should split evenly down the two vertical paths as they each present 3 k\( \Omega \) of resistance (10 mA each achieves 30 volts for \(V_a\), which is the source).

The voltage divider rule is a good choice for \(V_b\) as we know the applied voltage.

For clarity, the circuit is redrawn and relabeled with current directions and voltage polarities in Figure 5.4.5 . As a further exercise, try to verify the answers above using alternate means, as illustrated in Exercise 5.4. 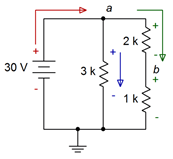 Figure 5.4.5 : Circuit for Example 5.4.2 with polarities and directions included. 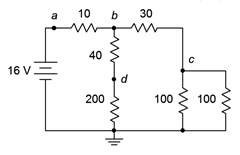 The three voltages can be quickly found via VDR as we know all of the associated sub-circuit resistances.

Lastly, the current through the 40 \( \Omega \) resistor can be found by dividing its voltage by its resistance. Its voltage is \(V_b − V_d\). A quicker method is to note that because it is in series with the 240 \( \Omega \), their currents are the same.

Once again the circuit is redrawn in Figure 5.4.8 to illustrate the current directions and voltage polarities. The usefulness of this will become even more apparent in the next example.

Determine \(V_{ac}\) and the voltages across each resistor in the circuit of Figure 5.4.9 . This circuit is perhaps the most complex offered so far. It may not be immediately apparent what the voltage polarities are for the various resistors or the proper current directions. Without these data, it will be impossible to determine \(V_{ac}\). To complicate matters, the voltage of interest is not ground referenced, but instead refers to two nodes located in arbitrary points of the circuit. It is worth recognizing that, by definition, \(V_{ac} = V_a − V_c\), but how are those voltages determined?

To assist with this minor quandary, the circuit has been redrawn in Figure 5.4.10 . Note that the current source and associated 1 k\( \Omega \) resistor have been flipped to the side, essentially trading places with the 2 k\( \Omega \) and 7 k\( \Omega \) series combination. This is entirely acceptable as both subgroups share node b and ground, meaning they are in parallel. Of course, the order of parallel elements in a situation like this does not matter. This orientation, having the source at one end of the circuit, tends to make visualization of current flows a little easier. 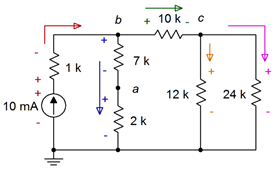 Figure 5.4.10 : Circuit for Example 5.4.3 redrawn and with polarities and current directions added.

Another solution path would be to determine the equivalent resistance that loads the current source. This allows the source voltage to be determined, after which a voltage divider may be applied between the 1 k\( \Omega \) and the remaining five resistors to find \(V_b\). From there, two more voltage dividers can be used to find \(V_a\) and \(V_c\) which will allow determination of the remaining resistor voltages via KVL. There are other possible paths as well but for lack of a better reason, we shall chase the first path that was outlined.

The source voltage and the voltage across the 1 k\( \Omega \) resistor are determined via Ohm's law:

Do not let the negative sign be bothersome. All it indicates is that node \(a\) is at a lower potential than node \(c\), i.e., that node \(a\) is 13.33 volts below node \(c\). It is also purely coincidental that \(V_{ac}\) and \(V_a\) have the same magnitude. In the lab, if a voltmeter is connected such that the red (positive) lead is attached to node \(a\) and the black (negative or reference) lead is attached to node \(c\), the meter will show a negative value. If the leads are connected in reverse, thus measuring \(V_{ca}\), the voltage will show up as positive (meaning that node \(c\) is higher in potential than node \(a\), the reverse way of looking at the situation)1.

In the example just completed it was noted that, by definition, \(V_{ac} = V_a − V_c\), and this dictated the method employed to find said voltage. It turns out that this is just one of many ways of determining a voltage from one point to another. In general:

\[\text{To find some voltage } V_{XY}, \text{start at point X and proceed along any convenient route to Y, subtracting voltage rises (polarities of − to +) and adding voltage drops (polarities of + to −) along the way.} \nonumber \]

As promised earlier in the chapter, it's time to look at a ladder network. While ladders can use any resistance values desired, certain ratios turn out to be eminently practical. Of particular note is the R-2R ladder, an example of which is shown in Figure 5.4.11 , and which is being driven by a current source. In this configuration, only two different resistor values are used; some initial value and a second value of precisely twice that size. As drawn in Figure 5.4.11 , all horizontal resistors use value R (6 k\( \Omega \) here) while all of the vertical resistors use 2R (12 k\( \Omega \) here) with the exception of the very last, or terminating, resistor which uses R.

It turns out that this arrangement offers something very unique: a halving of successive node voltages and branch currents. This is extremely useful in digital to analog conversion circuits; the sort of hardware that would turn the digital bits of an MP3 or WAV file into listenable analog signals to feed loudspeakers or headphones.

Determine all lettered node voltages in the circuit of Figure 5.4.11 .

Continuing the prior analysis, the entire resistor network presents an equivalent resistance of 12 k\( \Omega \). The node \(a\) voltage is determined by Ohm's law:

In order to verify the results of Example 5.4.4 , the R-2R ladder circuit is entered into a simulator, as shown in Figure 5.4.12 . The numbered nodes 1 through 5 in the simulation schematic correspond to the lettered nodes of the original circuit, \(a\) through \(e\), respectively. This is one example where the use of virtual instruments would result in a very cluttered display with five multimeters. Consequently, the simulation uses a DC operating point analysis with a single output window, as shown in Figure 5.4.13 .

Although the node numbers are not in ascending order, the voltages are a perfect match to the results computed previously. Each successive node sees half the voltage of the prior node. Although not explicitly listed here, it should be obvious that the currents will also be cut in half when progressing from left to right, via a quick application of Ohm's law. A bridge is a particular series-parallel configuration consisting of two pairs of series connected elements placed in parallel. An example of a resistive bridge being driven by a voltage source is shown in Figure 5.4.14 . In this circuit, \(R_1\) and \(R_2\) create one series connection while \(R_2\) and \(R_3\) create the other. The two pairs are then placed in parallel. While this circuit is shown with a voltage source, it could also be driven by a current source. Other elements might also be added. To understand the operation, the voltages \(V_b\) and \(V_c\) are established by the voltage dividers comprised of \(R_1\) and \(R_2\); and \(R_3\) and \(R_4\), respectively. With ordinary resistors, these voltages would be unchanging and therefore \(V_{bc}\) would also be a fixed value. We shall set it up such that \(V_b\) and \(V_c\) are the same voltage, and thus \(V_{bc}\) will be zero. Now assume that we replace \(R_1\) with a photoresistor. As the light level increases, its resistance decreases. This will cause \(V_b\) to rise which will cause \(V_{bc}\) to go positive. If the light level decreases, the resistance of \(R_1\) will increase, forcing \(V_b\) to drop which will cause \(V_{bc}\) to go negative. The greater the change in light, the larger \(V_{bc}\) will be, and its sign indicates whether the light level has increased or decreased compared to the original set point. By simply placing some manner of voltmeter between points \(b\) and \(c\), we can create a display that indicates light levels. Perhaps the most straightforward way to do this is to treat each half as a voltage divider and then subtract \(V_c\) from \(V_b\). A DC operating point analysis is run and the results are shown in Figure 5.4.17 . The voltages are precisely as expected. Series-parallel simplification techniques will not work for all circuits. Complex multi-source circuits and some resistive networks such as delta configurations or five-element bridge configurations require other techniques that will be addressed in later chapters.

1Or, if you prefer this situation posed as a question: When standing normally, is your head above your feet or are your feet below your head? Answer: Yes!