A dependent source is a current or voltage source whose value is not fixed (i.e., independent) but rather which depends on some other circuit current or voltage. The general form for the value of a dependent source is \(Y = kX\) where \(X\) and \(Y\) are currents and/or voltages and \(k\) is the proportionality factor. For example, the value of a dependent voltage source may be a function of a current, so instead of the source being equal to, say, 10 volts, it could be equal to twenty times the current passing through a particular resistor, or \(V=20I\).

There are four possible dependent sources: the voltage-controlled voltage source (VCVS), the current-controlled voltage source (CCVS), the voltage-controlled current source (VCCS), and the current-controlled current source (CCCS). The source and control parameters are the same for both the VCVS and the CCCS so \(k\) is unitless (although it may be given as volts/volt and amps/amp, respectively). For the VCCS and CCVS, \(k\) has units of amps/volt and volts/amp, respectively. These are referred to as the transresistance and transconductance of the sources with units of ohms and siemens.

The schematic symbols for dependent or controlled sources are usually drawn using a diamond. Also, there may be a secondary connection for the controlling current or voltage. Examples of a voltage-controlled voltage source, current-controlled voltage source, voltage-controlled current source and a current-controlled current source are shown in Figure 7.4.1 , left-to-right. On each of these symbols, the control element is shown to the left of the source. This portion is not always drawn on a schematic. Instead, the source simply may be labeled as a function, for example, \(V = 0.02 I_X\) where \(I_X\) is the controlling current.

In general, there are two possible configurations: isolated and coupled. A example of the isolated form is shown in Figure 7.4.2 .

In this configuration, the dependent source (center) does not interact with the subcircuit on the left driven by the independent source, thus it can be analyzed as two separate circuits. Solutions for this form are relatively straightforward in that the control value for the dependent source can be computed directly. This value is then substituted into the dependent source and the analysis continues as is usual. Sometimes it is convenient if the solution for a particular voltage or current is defined in terms of the control parameter rather than as a specific value (e.g., the voltage across a particular resistor might be expressed as 8 \(V_A\) instead of 12 volts, where \(V_A\) is 1.5 volts). 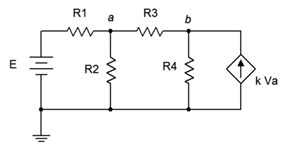 In this example it should be obvious that the current from the dependent source can affect the voltage at node \(a\), and it is this very voltage that in turn sets up the value of the current source. Circuits of this type can be analyzed using mesh or nodal analysis. Nodal analysis works well here and is illustrated following.

The currents are then described by their Ohm's law equivalents:

Values for the resistors, \(k\), and \(E\) normally are known, so the analysis proceeds directly.

Also, it is worth remembering that it is possible to perform source conversions on dependent sources, within limits. The same procedure is followed as for independent sources. The new source will remain a dependent source (e.g., converting VCVS to VCCS). This process is not applicable if the control parameter directly involves the internal impedance (i.e., is its voltage or current).

Time for an example, this one utilizing a simplified model of a transistor amplifier. This circuit is a good candidate for nodal analysis using the general method. Note that the points labeled \(a\) and \(b\) are the same node so we can write just two KCL summations. Using the current directions as draw on the schematic, for node \(b\) we have:

For verification, the dependent source circuit of Example 7.4.1 is entered into a simulator as shown in Figure 7.4.5 . A DC operating point analysis is run, the results of which are shown in Figure 7.4.6 . The output voltage shows roughly −7.08 volts and a \(V_b\) of just under 1 volt, thus achieving excellent agreement with the manual calculation. While this simulation is effective in this case, just using a dependent source to stand in for a transistor is rather limited. There are many other, perhaps more subtle, elements to a proper transistor model that will ensure both greater accuracy and proper results under a wide range of operating conditions. Any quality simulator will include a parts library using simulation models that are fine-tuned to particular manufacturer part numbers.