Cells run on the chemical energy found mainly in carbohydrate molecules, and the majority of these molecules are produced by one process: photosynthesis. Through photosynthesis, certain organisms convert solar energy (sunlight) into chemical energy, which is then used to build carbohydrate molecules. The energy stored in the bonds to hold these molecules together is released when an organism breaks down food. Cells then use this energy to perform work, such as movement. The energy that is harnessed from photosynthesis enters the ecosystems of our planet continuously and is transferred from one organism to another. Therefore, directly or indirectly, the process of photosynthesis provides most of the energy required by living things on Earth. Photosynthesis also results in the release of oxygen into the atmosphere. In short, to eat and breathe humans depend almost entirely on the organisms that carry out photosynthesis.

Figure \(\PageIndex{1}\). (a) Plants, (b) algae, and (c) certain bacteria, called cyanobacteria, are photoautotrophs that can carry out photosynthesis. Algae can grow over enormous areas in water, at times completely covering the surface. (credit a: Steve Hillebrand, U.S. Fish and Wildlife Service; credit b: “eutrophication&hypoxia”/Flickr; credit c: NASA; scale-bar data from Matt Russell)

Some organisms can carry out photosynthesis, whereas others cannot. An autotroph is an organism that can produce its own food. The Greek roots of the word autotroph mean “self” (auto) “feeder” (troph). Plants are the best-known autotrophs, but others exist, including certain types of bacteria and algae (Figure \(\PageIndex{1}\)). Oceanic algae contribute enormous quantities of food and oxygen to global food chains. More specifically, plants are photoautotrophs, a type of autotroph that uses sunlight and carbon from carbon dioxide to synthesize chemical energy in the form of carbohydrates. All organisms carrying out photosynthesis require sunlight. 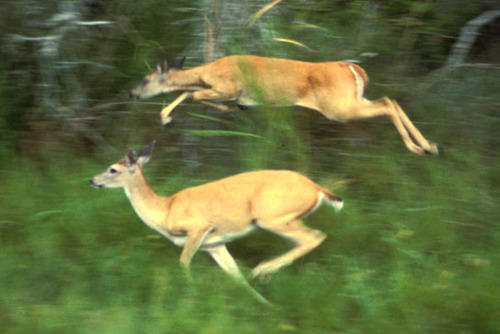 Figure \(\PageIndex{2}\). The energy stored in carbohydrate molecules from photosynthesis passes through the food chain. The predator that eats these deer is getting energy that originated in the photosynthetic vegetation that the deer consumed. (credit: Steve VanRiper, U.S. Fish and Wildlife Service)

Heterotrophs are organisms incapable of photosynthesis that must therefore obtain energy and carbon from food by consuming other organisms. The Greek roots of the word heterotroph mean “other” (hetero) “feeder” (troph), meaning that their food comes from other organisms. Even if the organism being consumed is another animal, it traces its stored energy back to autotrophs and the process of photosynthesis. Humans are heterotrophs, as are all animals and fungi. Heterotrophs depend on autotrophs, either directly or indirectly. For example, a deer obtains energy by eating plants. A wolf eating a deer obtains energy that originally came from the plants eaten by that deer (Figure \(\PageIndex{2}\)). Using this reasoning, all food eaten by humans can be traced back to autotrophs that carry out photosynthesis. 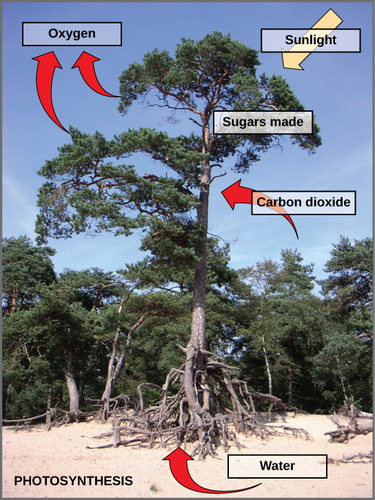 Although the equation looks simple, the many steps that take place during photosynthesis are actually quite complex. In plants, photosynthesis takes place primarily in the chloroplasts of leaves. Chloroplasts have a double (inner and outer) membrane. Within the chloroplast is a third membrane that forms stacked, disc-shaped structures called thylakoids. Embedded in the thylakoid membrane are molecules of chlorophyll, a pigment (a molecule that absorbs light) through which the entire process of photosynthesis begins.

The Two Parts of Photosynthesis

The Global Significance of Photosynthesis

The process of photosynthesis is crucially important to the biosphere for the following reasons: