Concepts of animal population dynamics can be applied to human population growth. Humans are not unique in their ability to alter their environment. For example, beaver dams alter the stream environment where they are built. Humans, however, have the ability to alter their environment to increase its carrying capacity, sometimes to the detriment of other species. Earth’s human population and their use of resources are growing rapidly, to the extent that some worry about the ability of Earth’s environment to sustain its human population. Long-term exponential growth carries with it the potential risks of famine, disease, and large-scale death, as well as social consequences of crowding such as increased crime. Human technology and particularly our harnessing of the energy contained in fossil fuels have caused unprecedented changes to Earth’s environment, altering ecosystems to the point where some may be in danger of collapse. Changes on a global scale including depletion of the ozone layer, desertification and topsoil loss, and global climate change are caused by human activities.

The fundamental cause of the acceleration of growth rate for humans in the past 200 years has been the reduced death rate due to changes in public health and sanitation. Clean drinking water and proper disposal sewage has drastically improved health in developed nations. Also, medical innovations such as the use of antibiotics and vaccines have decreased the ability of infectious disease to limit human population growth. In the past, diseases such as the bubonic plaque of the fourteenth century killed between 30 and 60 percent of Europe’s population and reduced the overall world population by as many as one hundred million people. Naturally, infectious disease continues to have an impact on human population growth, especially in poorer nations. For example, life expectancy in sub-Saharan Africa, which was increasing from 1950 to 1990, began to decline after 1985 largely as a result of HIV/AIDS mortality. The reduction in life expectancy caused by HIV/AIDS was estimated to be 7 years for 2005. 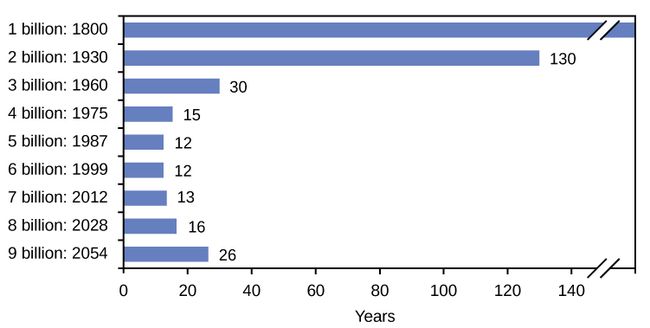 Figure \(\PageIndex{2}\). The time between the addition of each billion human beings to Earth decreases over time. (credit: modification of work by Ryan T. Cragun)

Technological advances of the industrial age have also supported population growth through urbanization and advances in agriculture. These advances in technology were possible, in part, due to the exploitation of fossil fuels.

The age structure of a population is an important factor in population dynamics. Age structure is the proportion of a population in different age classes. Models that incorporate age structure allow better prediction of population growth, plus the ability to associate this growth with the level of economic development in a region. Countries with rapid growth have a pyramidal shape in their age structure diagrams, showing a preponderance of younger individuals, many of whom are of reproductive age (Figure \(\PageIndex{3}\)).

Figure \(\PageIndex{4}\). The percent growth rate of population in different countries is shown. Notice that the highest growth is occurring in less economically developed countries in Africa and Asia.

Many dire predictions have been made about the world’s population leading to a major crisis called the “population explosion.” In the 1968 book The Population Bomb, biologist Paul R. Ehrlich wrote,

“The battle to feed all of humanity is over. In the 1970s hundreds of millions of people will starve to death in spite of any crash programs embarked upon now. At this late date nothing can prevent a substantial increase in the world death rate.”

While these predictions obviously didn’t bear fruit, the laws of exponential population growth are still in effect, and unchecked human population growth cannot continue indefinitely. Efforts to moderate population control led to the one-child policy in China, which imposes fines on urban couples who have more than one child. Due to the fact that some couples wish to have a male heir, many Chinese couples continue to have more than one child. The effectiveness of the policy in limiting overall population growth is controversial, as is the policy itself. Moreover, there are stories of female infanticide having occurred in some of the more rural areas of the country. Family planning education programs in other countries have had highly positive effects on limiting population growth rates and increasing standards of living.

In spite of population control policies, the human population continues to grow. The United Nations estimates the future world population size to be 11.2 billion people by the year 2100. There is no way to know whether human population growth will moderate to the point where the crisis described by Dr. Ehrlich will be averted. Another consequence of population growth is the change and degradation of the natural environment. Many countries have attempted to reduce the human impact on climate change by limiting their emission of greenhouse gases. However, a global climate change treaty remains elusive, and many underdeveloped countries trying to improve their economic condition may be less likely to agree with such provisions without compensation if it means slowing their economic development. Furthermore, the role of human activity in causing climate change has become a hotly debated socio-political issue in some developed countries, including the United States, despite the overwhelming scientific evidence. Thus, we enter the future with considerable uncertainty about our ability to curb human population growth and protect our environment to maintain the carrying capacity for the human species.