Have you ever wondered how coral reefs are formed? It has been established by the scientists in the Tropical Marine Biology field that coral reefs can be divided into three types: Fringing reefs, Barrier reefs, and Atolls which all require very specific conditions to develop. Coral reefs begin to form when free-swimming coral larvae attach to a rock or other submerged object on the edges of islands. As the corals grow, over very long periods of time, they form into a reef. The three types of reef represent stages in development of a coral reef over time.

Fringing reefs grow near the coastline around islands and continents. These types of reefs are the most common type we see and are considered to be the youngest of the 3 types of coral reefs. They are separated from the shore by shallow lagoons. The first stage of the formation is when the coral larvae attach itself to rocks or soil near the coasts. In certain parts of the world, they tend to form where volcanoes have also formed due to the shallow sloped walls being ideal to make shore reefs. The larvae become polyps and excrete calcium carbonate, which forms their exoskeleton. The secreted calcium carbonate sediments on the rocks and provides a substrate for more polyps coming to attach themselves. As more and more polyps attach, and layer over time, they create a coral reef. Calcareous Algae also add their sediments to the structure. Other organisms with calcareous skeletons, also add their own remains to the reef as they die and sink.  Since fringing reefs are the youngest and grow onshore, they tend to have less diversity of species within that ecosystem. Some locations of these reefs include Kenya, Australia and other parts of Africa shores. Fringing Reef in Eilat, Israel
Photo by: Mark A. Wilson [CC by 2.0]

As the name states, these reef types border along coastlines with a very wide and deep lagoon separating the two structures. The term “barrier” comes from the more shallower coral that sticks out of the water and creates a barrier or wall-like structure. One of the most famous and largest barrier reefs is “The Great Barrier Reef” in Australia. This reef is around 1200 miles and consists of many complex reefs making it up. This type of reef is formed when the fringing reefs slowly combine with each other and form a borderline along the coast. The calcium carbonate structures attract more polyps and the spaces are filled up. It forms a line along the coast and a ring around an island. Large barrier reefs are the rarest type of coral reef and only seen in a select few places on earth such as Belize and parts of the southern Pacific Ocean. Smaller barrier reefs are seen in places where islands are in an earlier stage of becoming submerged. Most of the reefs surrounding the Turks and Caicos Islands are barrier reefs that formed from the precipitation of CaCO3 on the remnants of continental debris resulting from the separation of North America from South Africa 200 million years ago (continental drift).  Dissolved minerals in the seawater form small particles called ooids that become cemented together to form oolite rock which makes up most of the Turks and Caicos islands and bank.

An Atoll Reef is a ring-like shaped coral reef or small islands of reefs in a circle with a lagoon in the middle and are usually located in the middle of the sea. These types of reefs are formed when an island has sunk completely (or nearly) in the middle of the ocean from rising sea levels around a pre-existing structure (these islands are often the tops of underwater volcanoes). Most atoll reefs can be found in the Pacific ocean where the waters are warm and salty. They can grow between the sizes of 12.6 km2 (Great Chagos Bank) and as small as 1.5 km2 (Ontong Java reef).  More animals are found in an atoll than in earlier stage reefs. Over a million species can live in one square kilometer of coral reef. The three types of reef from fringing to barrier to atoll, form in this sequential order and represent stages of development of a reef.

Watch a great animation clip of how an atoll forms. 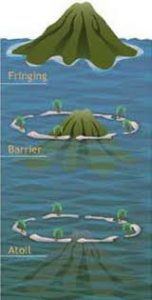 Below is a link to a video created by three undergraduates at Keene State College who discuss more about the different types of coral reefs: A YouTube element has been excluded from this version of the text. You can view it online here: http://pb.libretexts.org/marine/?p=35

Patch reefs are small, isolated reefs that grow from the open bottom of the island platform or continental shelf. They usually occur between fringing reefs and barrier reefs. They vary in size and rarely reach the surface of the water. 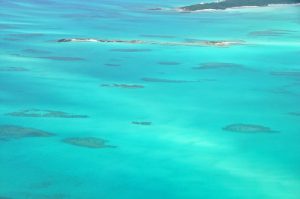