An ecosystem includes all of the living organisms (biotic) in a given area, interacting with each other, and also with their non-living components and environmental factors (abiotic). In an ecosystem, each species has its own niche or role to play. All of the aspects of the coral reef act together in a unit called an ecosystem. Coral reefs are a very high functioning ecosystem and are home to thousands of species of marine life. Algae, fish, echinoderms and many other species depend on the reef for their habitat and food too. The number of species is directly proportional to the mass of the coral reef. Mesophotic coral ecosystems (MCEs), are a common type of ecosystem that are home to light-dependent life, such as corals and their zooxanthellae. MCEs are typically at depths of 30-40 m and can extend over 150 m in tropical and subtropical regions.

The biotic portion of the marine ecosystem includes three main groups called producers, consumers, and decomposers. The organisms in these groups all play a key role in contributing to a functioning ecosystem.

Producers– These are autotrophic organisms which make their food through photosynthesis. Green plants, algae, and chemo-synthetic bacteria are all examples of producers in marine habitats.

Consumers– These organisms obtain food from other organisms or organic matter and are animals, zooplankton, and heterotrophs. Consumers are broken down into primary, secondary, tertiary, and quaternary categories. Primary consumers feed on producers and are herbivores. These organisms include sea turtles, zooplankton, and sea urchins. The secondary level feed on the primary producers and are organisms like rays and fish. The last levels are tertiary and quaternary, which feed on the secondary consumers and are the large fish, sharks, and sea lions.

Detritivores and Decomposers– These organisms feed on dead organic matter. Crustaceans like crabs and lobsters which shred and consume dead animals are examples of detritivores. Bacteria and fungi are decomposers that gain energy by breaking down dead organic matter into nutrients such as nitrates, nitrites, phosphates, and carbon dioxide. These are released back into the surrounding environment along with heat energy. 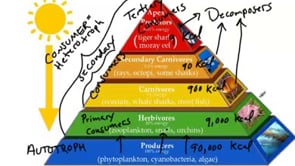 A Vimeo element has been excluded from this version of the text. You can view it online here: http://pb.libretexts.org/marine/?p=49

The health, abundance, and diversity of the organisms that make up a coral reef are directly linked to other surrounding terrestrial and marine environments. Mangroves and seagrass beds are two of the most important associated habitats of the greater coral reef ecosystem.

Mangroves are salt-tolerant trees that grow along tropical and subtropical coasts. They provide protection by stabilizing the coastline with their complex root system. They protect uplands from erosion, wind, waves, and floods. They also act as carbon storage systems, and help produce nutrients and filter out pollutants. Their complex root system serves as breeding and feeding grounds for marine organisms such as fish, invertebrates, and others. They are especially important as nursery grounds for juvenile and larval reef organisms, many of the animals raised in mangroves migrate to coral reefs.

There are around 80 different species of mangrove trees that live in many places around the world. In Florida, the Bahamas and the Caribbean, there are three main types of mangrove. Red mangroves grow on the ocean’s edge, black mangroves occur a bit upland from the reds, and white mangroves are found at the highest elevations furthest upland.

In Mumbai, the shores once used to be covered in mangroves but those forests were severely degraded from housing developments encroaching on the edge of the land and mismanagement of waste disposal. Mumbai alone has lost about 40% of its mangrove forests in just a few decades from being destroyed for houses to be built or also from the wastes left behind which can clog the roots of the trees preventing them from getting oxygen and filtering the freshwater they need.

Mission Mangroves, a project run by NGO United Way Mumbai, is making changes towards protecting the remaining mangroves and planting new ones. Every month volunteers partake in a clean up of the wetlands and twice a week there are planting sessions to restore the forests. At the time of this writing, they have already planted 55,000 new trees. United Way Mumbai’s director of community impact, Ajay Govale, stated that “the mission is to green 20 acres of wetland by planting mangroves, and to educate thousands of Mumbai people about the importance of mangroves.”

India is at the top for countries that are the worst at mismanaging plastic wastes and Mumbai is one of the worst cities for air pollution. The destruction of mangroves has contributed to this problem as they help filter pollutants out of the air and can absorb four times more carbon than tropical forests. The loss of mangrove forests also impacts other parts of the ecological community. Since they serve as shelter and breeding grounds for marine wildlife, this affects local fisheries and communities reliant on these marine animals. The loss of the mangrove forests also leaves the coastlines more vulnerable to be affected by rising sea levels from global climate change.

Seagrass – Seagrasses are flowering plants that often form meadows between mangrove habitats and coral reefs. They provide nutrients to organisms such as sea turtles, sea urchins and thousands of other species. Seagrasses also provide protection and shelter for crustaceans like crabs and lobsters, as well as fish such as snappers. Similar to mangroves, they also function as nursery grounds for juveniles, perform water filtration , release oxygen necessary for most marine life, and prevent seabed erosion. Seagrass Meadows by U.S. Department of Agriculture via Flicker

The information in this chapter is thanks to content contributions from Marisa Benjamin,Haley Zanga and Emma Verville