Compound propositions, then, correspond naturally with combinatorial logic circuits. But we have still not quite settled the question of just how powerful these circuits and propositions are. We’ve looked at a number of logical operators and noted that they can all be expressed in terms of ∧, ∨, and ¬. But might there be other operators that cannot be so expressed? Equivalently, might there be other types of logic gates—possibly with some large number of inputs—whose computations cannot be duplicated with and, or, and not gates? Any logical operator or logic gate computes a value for each possible combination of logical values of its inputs. We could always make a truth table showing the output for each possible combination of inputs. As it turns out, given any such truth table, it is possible to find a proposition, containing only the ∧, ∨, and ¬ operators, whose

Figure 2.6: Finding the proposition whose value is computed by a combinatorial logic circuit. Each wire in the circuit is labeled with the proposition that it represents. The numbering of the labels shows one of the orders in which they can be associated with the wires. The circuit as a whole computes the value of ¬(A ∧ B) ∧ (B ∨ ¬C).

value for each combination of inputs is given precisely by that table.
To see why this is true, it is useful to introduce a particular type of compound proposition. Define a simple term to be either a propositional variable or the negation of

Using p, q, r, s, A, and B as propositional variables, here are a few examples of pro- positions that are in disjunctive normal form:

Propositions in DNF are just what we need to deal with input/output tables of the type that we have been discussing. Any such table can be computed by a proposition in disjunctive normal form. It follows that it is possible to build a circuit to compute that table using only and, or, and not gates.

This is the first proof of a non-trivial claim that we’ve seen. You will learn about theorems and proofs, and proof techniques, at the end of this chapter and in Chapter 3.

As an example, consider the table in Figure 2.7. This table specifies a desired output value for each possible combination of values for the propositional variables p, q, and r. Look at the second row of the table, where the output value is true. According to the proof of the theorem, this row corresponds to the conjunction (¬p ∧ ¬q ∧ r). This conjunction is true when p is false, q is false, and r is true; in all other cases it is false, 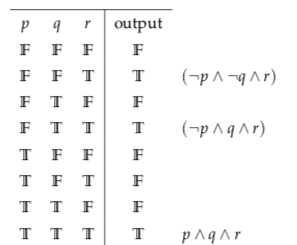 Figure 2.7: An input/output table specifying a desired output for each combination of values of the propositional variables p, q, and r. Each row where the output is T corresponds to a conjunction, shown next to that row in the table. The disjunction of these conjunctions is a proposition whose output values are precisely those specified by the table.

For example, consider the DNF proposition corresponding to the table in Figure 2.7. In (¬p ∧ ¬q ∧ r) ∨ (¬p ∧ q ∧ r) ∨ (p ∧ q ∧ r), we can factor (q ∧ r) from the last two terms, giving (¬p ∧ ¬q ∧ r) ∨ ((¬p ∨ p) ∧ (q ∧ r)). Since ¬p ∨ p ≡ T, and T ∧ Q ≡ Q for any proposition Q, this can be simplified to (¬p ∧ ¬q ∧ r) ∨ (q ∧ r). Again, we can apply the distributive law to this to factor out an r, giving ((¬p ∧ ¬q) ∨ q) ∧ r). This compound proposition is logically equivalent to the one we started with, but implementing it in a circuit requires only five logic gates, instead of the ten required by the original proposi- tion.8

If you start with a circuit instead of a proposition, it is often possible to find the asso- ciated proposition, simplify it using Boolean algebra, and use the simplified proposition to build an equivalent circuit that is simpler than the original. And simplifying a pro- position to DNF is often a sensible approach.

One way to simplify propositions is using a Karnaugh-map (or K-map for short) as you will learn in Computer Organisation. Using a K-map you can find what they will call a ‘minimal sum of products’. Notice that a sum of products is just a proposition written in DNF. For the course of Reasoning & Logic we may ask you to translate propositions to a DNF form. You can then choose to either do so using rewrite rules, but you are also free to use a K-map if you prefer. In one of the pencasts of this course we show how both methods lead to a result in DNF: youtu.be/GwVngCU9eYY.