There are many different control mechanisms that can be used, both in everyday life and in chemical engineering applications. Two broad control schemes, both of which encompass each other are feedback control and feed-forward control. Feedback control is a control mechanism that uses information from measurements to manipulate a variable to achieve the desired result. Feed-forward control, also called anticipative control, is a control mechanism that predicts the effects of measured disturbances and takes corrective action to achieve the desired result. The focus of this article is to explain application, advantages, and disadvantages of feedback control.

Feedback control is employed in a wide variety of situations in everyday life, from simple home thermostats that maintain a specified temperature, to complex devices that maintain the position of communication satellites. Feedback control also occurs in natural situations, such as the regulation of blood-sugar levels in the body. Feedback control was even used more than 2,000 years ago by the Greeks, who manufactured such systems as the float valve which regulated water level. Today, this same idea is used to control water levels in boilers and reservoirs.

To understand the principle of feedback control, consider Figure \(\PageIndex{2}\) In order to bake cookies, one has to preheat an electric oven to 350°F. After setting the desired temperature, a sensor takes a reading inside the oven. If the oven is below the set temperature, a signal is sent to the heater to power on until the oven heats to the desired temperature. In this example, the variable to be controlled (oven temperature) is measured and determines how the input variable (heat into oven) should be manipulated to reach the desired value.

Feedback control can also be demonstrated with human behavior. For example, if a person goes outside in Michigan winter, he or she will experience a temperature drop in the skin. The brain (controller) receives this signal and generates a motor action to put on a jacket. This minimizes the discrepancy between the skin temperature and the physiological set point in the person. The example is illustrated below: By definition, negative feedback is when a change (increase/decrease) in some variable results in an opposite change (decrease/increase) in a second variable. This is demonstrated in Figure \(\PageIndex{3}\) where a loop represents a variation toward a plus that triggers a correction toward the minus, and vice versa. Negative feedback leads to a tight control situation whereby the corrective action taken by the controller forces the controlled variable toward the set point, thus leading the system to oscillate around equilibrium.

As opposed to negative feedback, positive feedback is when a change (increase/decrease) in some variable results in a subsequently similar change (increase/decrease) in a second variable. In some cases, positive feedback leads to an undesirable behavior whereby the system diverges away from equilibrium. This can cause the system to either run away toward infinity, risking an expansion or even an explosion, or run away toward zero, which leads to a total blocking of activities (Figure \(\PageIndex{5}\)).

Several types of feedback control can be used to manipulate the conditions in a CSTR: positive feedback, negative feedback, or a combination of both. Figure \(\PageIndex{7}\) illustrates each of these possible situations. As depicted below, each CSTR is equipped with two electrodes that measure the voltage of the solution contained inside the reactor. A computer adjusts the flow rates of the pump(s) in response to any changes in the voltage. It is easy to see that by combining feedback controls, such as in Figure \(\PageIndex{1c}\), output concentrations and operating conditions can be maintained at the desired state much more effectively than by only using one type of feedback control.

The unique architecture of the feedback control provides for many advantages and disadvantages. It is important to look at the exact application the control will be used for before determining which type of control will be the best choice (see Cascade Control Systemsand Feed Forward Control).

Disadvantages: Time lag in a system causes the main disadvantage of feedback control. With feedback control, a process deviation occurring near the beginning of the process will not be recognized until the process output. The feedback control will then have to adjust the process inputs in order to correct this deviation. This results in the possibility of substantial deviation throughout the entire process. The system could possibly miss process output disturbance and the error could continue without adjustment. Generally, feedback controllers only take input from one sensor. This may be inefficient if there is a more direct way to control a system using multiple sensors. Operator intervention is generally required when a feedback controller proves unable to maintain stable closed-loop control. Because the control responds to the perturbation after its occurrence, perfect control of the system is theoretically impossible. Finally, feedback control does not take predictive control action towards the effects of known disturbances.

Although there are various types of controllers, most of them can be grouped into one of the two broad categories: closed loop and open loop controllers. The subsections below summarize the differentiation.

In a closed loop control system, the input variable is adjusted by the controller in order to minimize the error between the measured output variable and its set point. This control design is synonymous to feedback control, in which the deviations between the measured variable and a set point are fed back to the controller to generate appropriate control actions.The controller C takes the difference e between ther reference r and the output to change the inputs u to the system. This is shown in figure below. The output of the system y is fed back to the sensor, and the measured outputs go to the reference value

On the other hand, any control system that does not use feedback information to adjust the process is classified as open loop control. In open loop control, the controller takes in one or several measured variables to generate control actions based on existing equations or models. Consider a CSTR reactor that needs to maintain a set reaction temperature by means of steam flow (Figure \(\PageIndex{8}\)): A temperature sensor measures the product temperature, and this information is sent to a computer for processing. But instead of outputting a valve setting by using the error in temperature, the computer (controller) simply plugs the information into a predetermined equation to reach output valve setting. In other words, the valve setting is simply a function of product temperature.

Note that the open loop controller only uses the current state of the measured variable (product temperature) and a model to generate its control output (valve setting), as opposed to monitoring errors that have already taken place. As the result, the quality of the control system depends entirely upon the accuracy of the implemented model, which is challenging to develop. For this reason, feedback, or closed loop, controllers are generally recognized as the more reliable control system.

Your company is designing a plant to produce biodiesel. Several of the unit processes require heated water that is under tight temperature control. The desired temperature of the water is 65°C ± 1°C. To accomplish this, steam will be used in a shell and tube heat exchanger to heat the incoming water.

A member on the project team suggests the following feed forward control system to regulate the temperature of the water stream. Temperature and flow rate data for the incoming steam and water streams will be used along with energy balance calculations to determine the flow rate of steam required to keep the exiting water stream at the appropriate temperature. 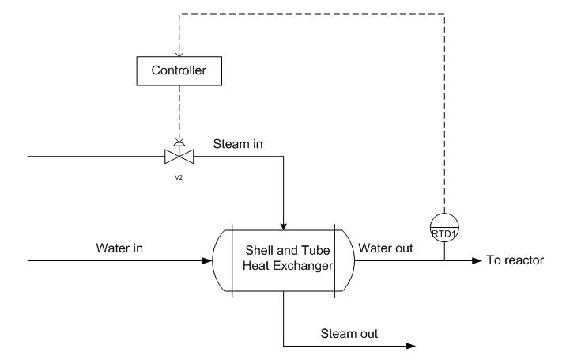 Of the following two scenarios, which would be the best to use a feedback control?

Using a shell and tube heat exchanger, a fuel stream is pre-heated using a steam stream from the utilities part of the plant. The plant is located in Ann Arbor, Michigan. Originally, a feedback controller is implemented to control the amount of steam coming into the shell and tube exchanger based on the temperature of the flow out of the exchanger. This is depicted below.

Upon implementation in the process, it was found that the feed temperature was not the only factor in the variance of the outlet stream. Because the plant is operated in Michigan, the steam temperature varies between seasons, colder in the winter and warmer in the summer. Propose a control scheme to account for both of these variances.

Here a cascade control scheme would be optimal to control the outlet temperature of the stream to a desired temperature, not just a feedback controller. The scheme is depicted below.

A blending system is used to mix a process stream (Stream 1, pure A) with liquid catalyst (Stream 2, pure B). The mixture then flows into a reactor. The flowrate of stream 1 (f1) can vary but it is possible to manipulate the flowrate of stream 2 (f2). The outflow rate from the reactor (f3) also can be manipulated via a pump. The level in the measures by a level transmitter that sends its signal to a level controller. All three flow rates can be measured, but measuring the composition of the streams is impossible. In order to control the level of the tank, and engineer has two options:

Could method (i) utilize feedforward or feedback control of the level? If so, explain how it can be done.

Could method (ii) utilize feedforward or feedback control of the level? If so, explain how it can be done. This problem was meant to explore different strategies for both feedback and feedforward control configurations. Additionally, it demonstrates how controlling the manipulated variables (either f2 for configuration (i) or f3 for configuration (ii)) affects the desired outcome (maintaining consistent tank height).