Click for a text description of 3 Legged Stool of Sustainability.

Challenges to Food Producers: The issue of scale and the “three-legged stool” of sustainability

The previous page on different variants of alternative food systems stressed different ways of analyzing and critiquing the modern global food system based on issues of sustainability. In your capstone projects, you are asked to propose ideas for sustainable food systems in your capstone regions. Therefore, in this page, we repeat from module one the concept of sustainability as a "three-legged stool" combining aspects of environmental, social, and economic sustainability (Fig. 10.1.15, also seen in module 1). We may be most used to thinking about Environmental Sustainability, for example in the need to conserve energy or recycle food containers to reduce pollution and energy generation by fossil fuels, as well as avoiding litter and saving on landfill space. As we presented in module 1, however, sustainability also contains economic or financial aspects devoted to employment, livelihood, and profitability, as well as the concept of social sustainability that embodies goals of social equity and more harmonious societies. Therefore, we are also interested in the nodes of food production such as farms because of the challenges to the economic sustainability of farm (and fishery) enterprises. It is important to think about economic sustainability because of the economic risks that food producers are exposed to. Economic risk is inherent in producing for local, regional and global food systems because producers may not be producing high-value products and must absorb environmental risk, for example from droughts, floods, or pests (see the previous modules, and module 11, next, regarding adaptive capacity). In a drought year, for example, selling vastly reduced yields of soybean or maize crops usually mean an economic loss for a farm because the price of these crops is not very high on the global or local market.

In addition, social sustainability concerns regarding food production are an important part of debates about modern society: for example, smallholder farmers, and laborers on larger farms and within fisheries in the United States and globally, are some of the most economically and politically marginalized populations in the world. Many researchers and advocates point out that food systems cannot be truly sustainable until they embody a more just distribution of resources and power. In this short section we want to highlight two important concepts that link to these ideas of social sustainability and justice: first, the idea of “poverty traps” within smallholder farming around the world (see Carter and Barrett 2006, reference below), and on the next the threat posed to so-called “agriculture of the middle” in industrialized countries where pressures on producers lead either to a small-scale, niche markets orientation (e.g.. farmers markets) or an inexorable growth toward larger and larger farms that capture economies of scale in agriculture. By introducing these concepts now, you should see both how they fit into the analysis of vulnerability and resilience in the next module. You may be able to incorporate these challenges and potential solutions into your capstone region scenarios.

What is a poverty trap in smallholder agricultural systems?

As you’ve seen in the “pond-garden-livestock” (VAC) system of Vietnam in the video at the beginning of this module, agriculture practiced in smallholder food systems on small plots of land (less than 10 acres or 4 hectares, say) around the world is a hugely important and often quite sustainable enterprise. Smallholder agriculture can embody some of the most efficient use of resources in use today, whether these are traditional methods, well-adapted domesticated plants, new innovations taken up by smallholder families, or labor that is efficiently allocated by a family that is in constant contact with their enterprise and ecosystem. However, a concern about the most impoverished smallholders is that they can fall into what is called a poverty trap, where smallholders produce food from a degraded resource base, either because they have degraded it or because they have been forced to the margins of local society, and many times, both. The diversity of diets can also suffer when the least expensive food sources are local cereal and starch crops or calories coming from the globalized food system. The combination of poverty and degradation of soils and other resources does not permit these farmers sufficient income or well-being to invest in and therefore improve their soils or other aspects of local agroecosystems, and so it is likely that they, and their farm ecosystems, will remain in a low level of productivity and earnings. This is therefore called a poverty trap, and it essentially combines a lack of economic, social, and environmental sustainability for these smallholder households. It has also been linked to the concept of a downward spiral of poverty and soil degradation (Fig. 10.1.16). 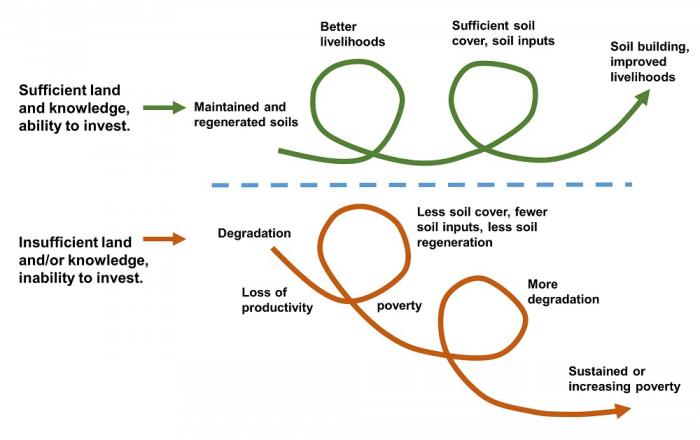 Figure 10.1.16.: Spirals of soil regeneration and improved livelihoods (top) versus poverty and soil degradation (bottom). The reinforcing feedbacks between soil quality and productivity with social and economic marginalization illustrate the connections between social and environmental sustainability. Credit: Steven Vanek

An example of this poverty trap "downward spiral" is furnished by the dust bowl of the 1930s in the United States, in the case of many families who farmed small plots of land during the depression. The combination of overexploited soils from decades of agricultural expansion after the U.S. civil war, a depressed economy contributing to overall hardship, and a multi-year drought led to a downward spiral in which many poor farmers were finally forced to leave their land and migrate to other areas of the country seeking employment and public assistance. In module 11, we'll examine further how combined human and natural system factors (like poverty and drought, for example) interact to create vulnerability for parts of human society, and ways that human systems have adapted to surviving such shocks and perturbations as drought. We'll include an example of a native American population that was relatively successful in weathering the Dust Bowl and was not subjected to this sort of poverty trap or downward spiral. Also, in the years after the dust bowl, the Soil Conservation Service of the United States Department of Agriculture (USDA) was highly active in helping farmers to transition to practices that helped to avoid soil erosion and aid in regeneration of degraded soils (see the additional reading resources below for this history of the Soil Conservation Service).

In current-day contexts where poverty traps represent a risk or chronic problem for small producers, then, both government agencies and development organizations focus on reducing barriers to practicing more sustainable agriculture. Development organizations include those called non-governmental organizations or NGOs, nonprofits, international aid organizations, as well as organizations founded by and managed by farmers themselves. For example, see the blog article below in "additional reading", regarding efforts to promote agroforestry in Haiti, where poverty and land degradation have long been intertwined. These organizations try to reduce barriers to investment in sustainable food production through the promotion of simple, low-cost strategies to conserve soils and raise crop diversity and productivity (see the previous modules for examples) that are within financial reach of smallholder producers. These technology options are optimally combined with credit and direct aid that helps farmers to overcome the resource barriers for investing in the protection of the natural systems that sustain their production. This sort of knowledge and technology, and the ability of farmers to invest in the productivity of their soils are an example of adaptive capacity, a concept that will a major topic of module 11. In addition, government, NGOs, and farmer organizations may also engage in political advocacy that seeks a more just distribution of land, credit, or access to markets that can help producers to avoid or move out of poverty traps.