4.1 A Description of Amplitude Ratio, Phase Shift and Frequency Response

A good way to understand the physical meaning of amplitude ratio and phase shift and how they change as a function of the frequency of the input stream is through the analysis of a simple system. A well-insulated continuously-stirred tank reactor (CSTR) with an input flow equal to its output flow is a good example (Figure 1). For this description we consider inlet and outlet temperature, but inlet concentration or feed rate could also be used.

As frequency of the temperature variation increases, the period of the input decreases and the phase shift becomes larger. This can be seen in the following graphs: </br> Imagine that we have a sensitive reaction that must be maintained with 3˚C of 55˚C, it now becomes of utmost importance that we understand the frequency response of this CSTR system. Herin lies the utility of Bode plots; they depict a range of different frequency responses in two plots. This allows a relatively rapid determination of system robustness. In addition, frequency response and Bode plot analysis can be used to tune PID control systems.

For a given process described by

, one considers a sinusoidal input

After a long time, the solution will also be sinusoidal, with

is the phase lag (

Sometimes, to solve for

using an ODE solver, it is useful to have the process equation in the form

Because it’s impossible to perfectly model a real chemical process, control engineers are interested in characterizing the robustness of the system – that is, they want to tune controllers to withstand a reasonable range of change in process parameters while maintaining a stable feedback system. Bode (pronounced boh-dee) plots provide an effective means to quantify the system’s stability. Bode plots describe an open or closed-loop system as a function of input frequency and give a picture of the system’s stability. If all inputs into a system were constant, it would be a relatively simple task to control the system and its output. However, if an input value, such as temperature, varies sinusoidally, then the output should also be describable as a sinusoidal function. In this case Bode plots are a useful tool for predicting the response of the system. There are two Bode plots used to describe a system. The first shows amplitude ratio as a function of frequency. The amplitude ratio is the amplitude of the output sine wave divided by the input sine wave. The second plot graphs phase shift as a function of frequency, where phase shift is the time lag between the output and the input sine curves divided by the period of either of the sine curves and then multiplied by -360° (or -2π radians) to express this shift as an angle.

To construct a Bode plot, an engineer would have empirical data showing input and output values that vary as sinusoidal functions of time. For instance, there might be inlet temperature data that varies sinusoidally and the outlet temperature data that also varies sinusoidally. For example, given a heat exchanger that is used to cool a hot stream, we can vary the flow rate of the hot stream and model it sinusodially. (This can be done using ODEs & an Excel model of a heat exchanger.)

Bode plots are constructed from steady-state data. Figure 3 shows part of the steady-state region of the same data used for Figure 2.

To collect a single data point for a Bode plot we will use the information from a single period of the inlet flow rate and the corresponding temperature from the hot exiting stream.

To find the phase shift, the periods of the input and output sine curves need to be found. Recall that the period, P, is the length of time from one peak to the next.

The phase shift is then found by

Using these values found from multiple perturbations in feed flow rate it is possible to construct the following Bode plots: Prior to the advent of powerful computer modeling tools, controls engineers would model systems using transfer functions. Readers interested in learning more about how these were used to construct Bode plots should refer to Bequette's Process Control: Modeling, Design, and Simulation (see References). This wiki assumes that the engineer already has data in Excel, etc, that shows the sinusoidal behavior of input and outputs.

A control system is unstable if the open-loop frequency response exhibits an AR exceeding unity at the frequency for which the phase lag is 180 degrees. This frequency is called the crossover frequency. Adjusting the gain so that the AR < 1 for - phi < (180 minus phase margin) results in acceptable stability if the phase margin is greater than 30 degrees.

As previously mentioned, the controls engineer uses Bode plots to characterize the stability of the system. If you were to find that the amplitude ratio is greater than 1 the system would be unstable at that frequency. An important stability criterion is that AR < 1 when phase shift = -180 degrees (or -pi radians). This is called the Bode stability criterion and if it holds for a closed-loop system, then that system will be stable. If this criterion is not satisfied and you were to put a feedback controller on this process, as done in PID tuning via optimization [PID_HeatExchange.xls – Note there are still errors in this file and a link will be provided once the file is operational.], the process would explode due to the response lag. The reason for this is that the system might think temperature is too low when it's actually to high, so it would decrease cooling water rather than increase it. Also, with an AR < 1, an error in input is amplified in the output, so the system will lose control due to amplification of error. This could obviously be a dangerous situation, for example in an exothermic CSTR, which could explode. This can also be seen by following the procedure above for the PID_HeatExchange.xls file. 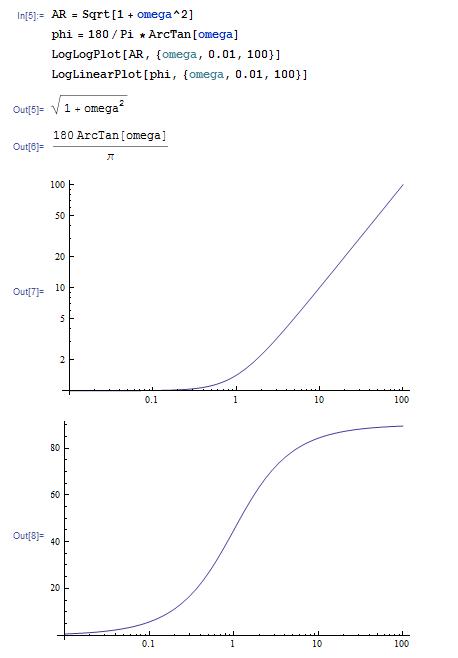 Bode plot for PID controller, using the \Manipulate" function to watch the effect of varying the values of both Tau_I and Tau_D: Bode plot for open-loop operation of third-order system with a P controller: This yields omega = 1.18322 which is the crossover frequency, and can be used to determine the amplitude ratio (ask mathematica for AR) the gain (Kc=1/AR)

To determine what the gain should be set to at a phase margin of 30 degrees (safe operating conditions) use the following in mathematica:

The phase margin of Cohen-Coon and other frequency analysis (such as Zielger-Nicholas) can be calculated by using the gain (Kc) value gotten from the method a typing the following into mathematica:

For Bode Plot Analysis, we assume a periodic input to the system:

Based on this input, we can hypothesize that:

From Equation \ref{5}, we can divide both sides by \(AR\cos(φ)\) and rearranging to get:

Based on this relationship, we can draw a triangle with the angle φ and the relationship shown in equation (7). A picture of the triangle is shown below. From Equation \ref{6} and the triangle above, we can solve for AR:

Tuning via phase margin is a more precise method than tuning through Cohen-Coon Rule and Ziegler-Nichols Tuning Rule. We can find the gain and phase margin by using bode plots or by an analytical method.

Finding the phase margin with a gain:
1) Use your expression for AR, set

and solve for ω.
2)Input the value obtained for ω in your expression for Φ.

4.9 Determining the Slope of a Bode Plot

The starting value depends on the KC and KP values contributing to the process.

The slope for an uncontrolled process is equal to the negative of the order of the process. For example, if there is a first-order process with no controller the slope of the Bode Plot would be -1 (-1 for first order), after the crossing point has been reached. A picture of this Bode Plot is shown below. For a process controlled by a PD controller, the AR is essentially the inverse of the first-order system AR, meaning that the slope addition from a PD controller is a +1, instead of a -1 as in a first-order process. For a second-order system with a PD controller the final slope will be -1 (-2 from the second order process, +1 from PD). However, there may be multiple crossing points, whose location depends on the value of τP and τD. Remember that the crossing point is where ωτ equals one. Since the slope contribution only comes after the crossing point, a Bode Plot for τD less than τP would look like the picture below. You are a controls engineer and wish to characterize a heat exchanger used in a chemical process. One of the many things you are interested in knowing about the system is how the hot outlet temperature responds to fluctuations in the inlet flow rate. Using data for a particular inlet flow rate, you graphed normalized (why?) flow rate and normalized hot outlet temperature vs. frequency (rad/min). Use this graph to determine the amplitude ratio. Because flow rate units and temperature do not have the same units, these values needed to be normalized before calculating the amplitude ratio. To normalize flow, use the following equation:

where F is the flow rate of a particular data point.

In this problem temperature, T, is in ˚C, so

Note that this is just one way to find the amplitude of a wave. It could also be found simply by reading the values off the graph of a wave.

Once the amplitudes of the inlet and outlet waves are found, use the values to find the amplitude ratio, AR, as follows:

The following graph shows how inlet flow and both the hot and cold outlet temperatures vary as sinusoidal functions of time. This graph was generated using the same data for the heat exchanger of Example 1. Use this graph to find the phase shift between the inlet flow and the hot outlet stream. Determine the period (P) – This can be done by finding the time from one peak to the next of a given wave. In this case, we want to know the period of the inlet flow rate, so P = 1.14s.

Since we're only concerned with time values for finding the phase shift, the data doesn't need to be normalized.