1.2 Types of Structures and Structural Members

There are several types of civil engineering structures, including buildings, bridges, towers, arches, and cables. Members or components that make up a structure can have different forms or shapes depending on their functional requirements. Structural members can be classified as beams, columns and tension structures, frames, and trusses. The features of these forms will be briefly discussed in this section.

Beams are structural members whose longitudinal dimensions are appreciably greater than their lateral dimensions. For example, the length of the beam, as shown in Figure 1.1, is significantly greater than its breadth and depth. The cross section of a beam can be rectangular, circular, or triangular, or it can be of what are referred to as standard sections, such as channels, tees, angles, and I-sections. Beams are always loaded in the longitudinal direction.

Columns are vertical structural members that are subjected to axial compression, as shown in figure 1.2a. They are also referred to as struts or stanchions. Columns can be circular, square, or rectangular in their cross sections, and they can also be of standard sections. In some engineering applications, where a single-member strength may not be adequate to sustain a given load, built-up columns are used. A built-up column is composed of two or more standard sections, as shown in Figure 1.2b. Tension structures are similar to columns, with the exception that they are subjected to axial tension. Frames are structures composed of vertical and horizontal members, as shown in Figure 1.3a. The vertical members are called columns, and the horizontal members are called beams. Frames are classified as sway or non-sway. A sway frame allows a lateral or sideward movement, while a non-sway frame does not allow movement in the horizontal direction. The lateral movement of the sway frames are accounted for in their analysis. Frames can also be classified as rigid or flexible. The joints of a rigid frame are fixed, whereas those of a flexible frame are moveable, as shown in Figure 1.3b.

The compatibility of displacement concept implies that when a structure deforms, members of the structure that are connected at a point remain connected at that point without void or hole. In other words, two parts of a structure are said to be compatible in displacements if the parts remain fitted together when the structure deforms due to the applied load. Compatibility of displacement is a powerful concept used in the analysis of indeterminate structures with unknown redundant forces in excess of the three equations of equilibrium. For an illustration of the concept, consider the propped cantilever beam shown in Figure 1.5a. There are four unknown reactions in the beam: the reactive moment, a vertical and horizontal reaction at the fixed end, and another vertical reaction at the prop at point B. To determine the unknown reactions in the beam, one more equation must be added to the three equations of equilibrium. The additional equation can be obtained as follows, considering the compatibility of the structure: Fig. 1.6. Application of the principle of superposition.

The work-energy principle is a very powerful tool in structural analysis. Work is defined as the product of the force and the distance traveled by the force, while energy is defined as the ability to do work. Work can be transformed into various energy, including kinetic energy, potential energy, and strain energy. In the case of a structural system, based on the law of conservation of energy, work done W is equal to the strain energy U stored when deforming the system. This is expressed mathematically as follows:

The total work done is represented as follows:

Thus, the strain energy is written as follows:

The strain energy in the case of linearly elastic deformation can be obtained by computing the area under the load-deformation diagram in Figure 1.7b. This is expressed as follows:

The virtual work principle is another powerful and useful analytical tool in structural analysis. It was developed in 1717 by Johann Bernoulli. Virtual work is defined as the work done by a virtual or imaginary force acting on a deformable body through a real distance, or the work done by a real force acting on a rigid body through a virtual or fictitious displacement. To formulate this principle in the case of virtual displacements through a rigid body, consider a propped cantilever beam subjected to a concentrated load P at a distance x from the fixed end, as shown in Figure 1.8a. Suppose the beam undergoes an elementary virtual displacement δu at the propped end, as shown in Figure 1.8b. The total virtual work performed is expressed as follows:

Since the beam is in equilibrium, δW = 0 (by the definition of the principle of virtual work of a body). 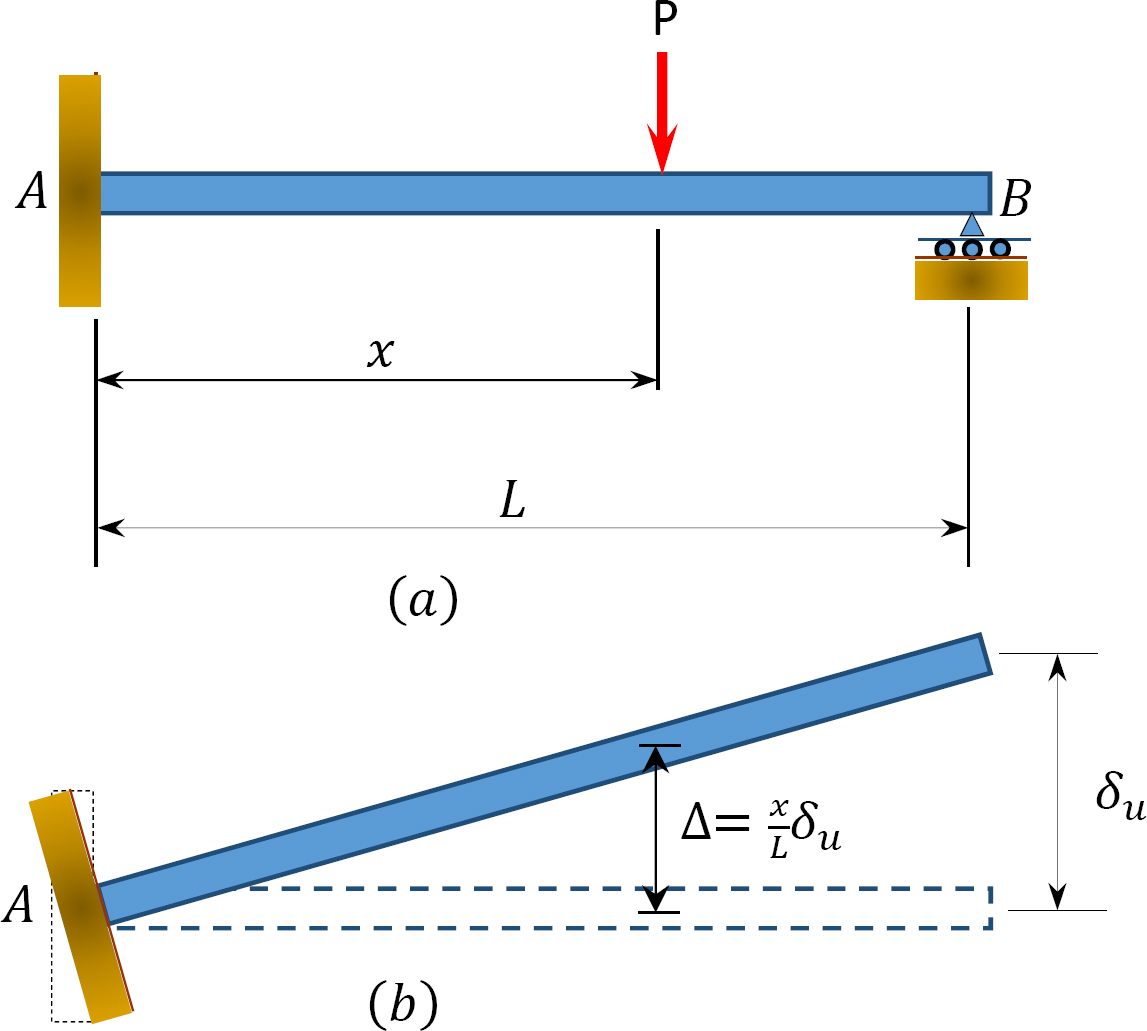 Structural idealization is a process in which an actual structure and the loads acting on it are replaced by simpler models for the purpose of analysis. Civil engineering structures and their loads are most often complex and thus require rigorous analysis. To make analysis less cumbersome, structures are represented in simplified forms. The choice of an appropriate simplified model is a very important aspect of the analysis process, since the predictive response of such idealization must be the same as that of the actual structure. Figure 1.9a shows a simply supported wide-flange beam structure and its load. The plan of the same beam is shown in Figure 1.9b, and the idealization of the beam is shown in Figure 1.9c. In the idealized form, the beam is represented as a line along the beam’s neutral axis, and the load acting on the beam is shown as a point or concentrated load because the load occupies an area that is significantly less than the total area of the structure’s surface in the plane of its application. Figures 1.10a and 1.10b depict a frame and its idealization, respectively. In the idealized form, the two columns and the beam of the frame are represented by lines passing through their respective neutral axes. Figures 1.11a and 1.11b show a truss and its idealization. Members of the truss are represented by lines passing through their respective neutral axes, and the connection of members at the joints are assumed to be by frictionless pins. The method of sections is useful when determining the internal forces in structural members that are in equilibrium. The method involves passing an imaginary section through the structural member so that it divides the structure into two parts. Member forces are determined by considering the equilibrium of either part. For a beam in equilibrium that is subjected to transverse loading, as shown in Figure 1.12, the internal forces include an axial or normal force, N, shear force, V, and bending moments, M. The two most commonly used systems in science and technology are the International System of Units (SI Units) and the United States Customary System (USCS).

In the SI units, the arbitrarily defined base units include meter (m) for length, kilogram (kg) for mass, and second (s) for time The unit of force, newton (N), is derived from Newton’s second law. One newton is the force required to give a kilogram of mass an acceleration of 1 m/s2. The magnitude, in newton, of the weight of a body of mass m is written as follows:

In the United States Customary System, the base units include foot (ft) for length, second (s) for time, and pound (lb) for force. The slug for mass is a derived unit. One slug is the mass accelerated at 1 ft/s2 by a force of 1 lb. The mass of a body, in slug, is determined as follows:

The two systems of units are summarized in Table 1.1 below. 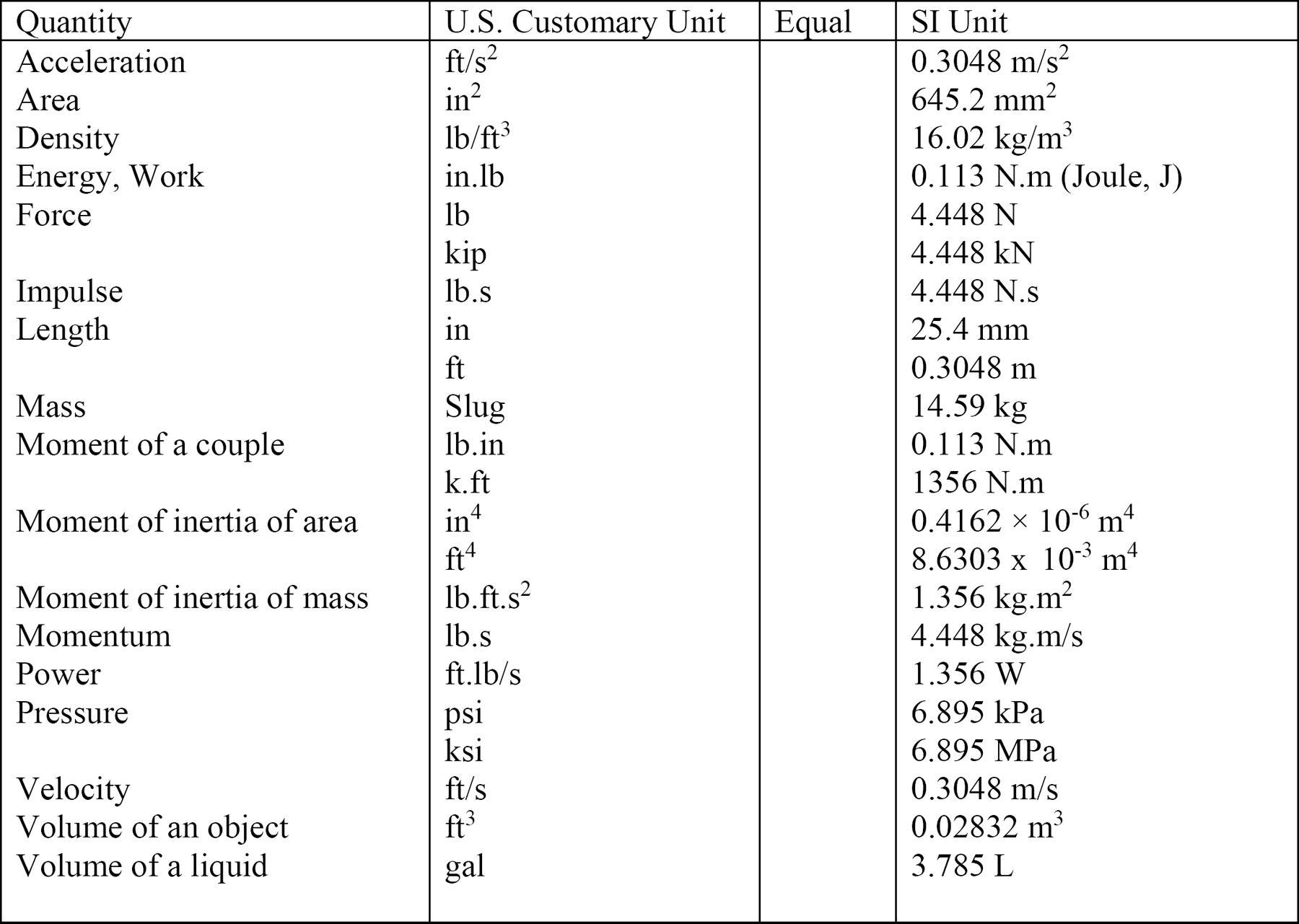 Prefixes are used in the International System of Units when numerical quantities are quite large or small. Some of these prefixes are presented in Table 1.3.

Types of structures: Structural members can be classified as beams, columns and tension structures, frames, and trusses.