Reactors are the central focus of many chemical plants. Many parameters must be controlled in a reactor for proper operation. Temperature is of great importance because it affects reaction rates and equilibrium relationships. A major challenge for temperature control is handling the nonlinear nature of temperature inside most reactors. Therefore, it is important to design an effective control architecture in order to ensure optimal operation of the reactor.

Here we will introduce a few of the most common control topologies which will be examined in applications to endothermic and exothermic CSTRs below. Please refer to the specific wiki pages for each type for detail.

Feedback and feed-forward refer to the direction in which the sensor information is transfered to an actuator valve. Feedback control dictates that sensor information is "fed back" to a previous part of the process. For example, the reading from a level sensor of a filling tank can be "fed back" to the valve controlling the input to the tank. Feed-forward control means the sensor information is used to control something downstream from where the reading was taken. For example, the measured flow rate of water going into an evaporator can be used to control the heating coil inside of the evaporator. For detail about these two control topologies, please see the respective pages: Feedback Control Feed-Forward Control.

Ratio Control is used when the ratio between two measured process variables has an optimal value. In the context of two input streams with optimal flow ratio going into a reactor, one stream is designated as the control stream, and one stream is designated as the wild stream. The wild stream fluctuates, and a valve on the control stream is opened or closed to maintain the ratio between the two stream flows. For detail about ratio control, see Ratio Control.

Cascade control simply means that instead of one control loop found in simple control topologies where a sensor's measurement directly controls an actuator valve, multiple loops are used so that sensors' measurements can control set points for other controllers. For example, the temperature sensor measurement of process fluid exiting a reactor can be used to modify the set point of the flow controller of steam feeding the heating jacket, which then sets the steam valve. This multiple-loop system eliminates some problems caused by variable-pressure feeds, for instance. For detail about cascade control, see Cascade Control.

There a few very common disturbances that CSTR may be subjected to. When designing a control architecture for a CSTR, you must invertigate the possibility of all of these disturbances, determine the magnitude of each possible disturbance, and address how each will be handled.

Plug Flow Reactors (PFRs) behave differently than CSTRs and will have different properties to consider when designing a control architecture for them. The biggest difference is that the temperature, flows, and compositions will all vary along the reactor. There is danger of exceeding a design limitation in temperature or flow in certain parts of the PFR, so control of the reactor is important along its length. To design a control architecture for a PFR, the following disturbances and changes to the system must be addressed:

DISCLAIMER: All reactors shown posess two controllers. We realize that in the real-world a reactor would require more than two temperature controllers but we are concerned primarily with the common placement of controllers outside of the reactor in this wiki. Thank you and continue reading.

Endothermic reactors tend to be easier to control than exothermic ones because they are much less prone to runaway. There are two commonly used methods to control an endothermic CSTR. These two methods are differentiated by the variables they manipulate. In the first method, the steam pressure in the reactor jacket is in the manipulated variable, whereas in the second method, the steam flowrate is the manipulated variable. In endothermic reactors, as well as exothermic ones as we will later see, feedback is the most common type of control system used. This is done to ensure that changes are being based on what is actually happening in the reactor and not what is predicted to happen. This is important in the endothermic case to ensure that the proper amount of heat is being added to the reactor to obtain a desired conversion. Feedback is more useful for control since the amount of heat needed can change quickly based on the amount or concentration of reactants being added. Generally the temperature control of the reactor is independent of the reactant feed, so the system needs a way to adjust to changes within reactant feed, and this is accomplished by using feedback control in the streams that control the temperature (i.e. the steam feed stream). As can be seen in the figure above, when steam pressure is used as the manipulated variable the control system is run in a feedback mode. One of two things can control the amount of steam fed into the jacket. The first is the temperature of the product, and the second is the steam pressure in the jacket. As mentioned above, a change in the heat duty required by the reactor will quickly change the steam pressure which is why it is commonly used over the steam flowrate.

The second method for controlling a endothermic CSTR is by manipulating the steam flow rate. Using flow rate as the manipulated variable makes the control system prone to changes in heat load and changes in the enthalpy of supplied steam. These changes require direct action of the temperature control system. One advantage of using flowrate as the manipulated variable is that heat load is directly measured, and thus, conversion is directly measured. As can be seen in the figure above the system works in a feedback mode when the steam flowrate is used as the manipulated variable. The temperature of the product stream is the primary factor in adjusting the amount of steam fed into the system, and therefore this system is less responsive to changes in the amount of heat duty required for the process.

Note here that there are again two controllers used to adjust the steam valve. This setup is similar to the previous case, but now the flow controller is the "slave" controller to the temperature controller. The cascade control scheme is again at work! 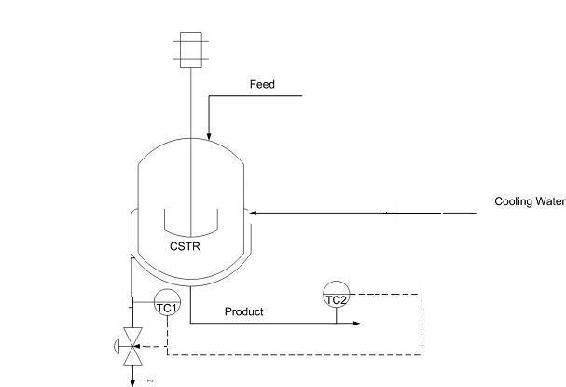 As can be seen in the above diagram you will notice that again cascade control is utilized in this particular system. The temperature sensor on the product stream provides information on whether the stream needs to be cooled more or less and outputs a setpoint to the temperature controller on the recycle stream. This controller can then take into account the temperature of the recycled coolant water and make an adjustment to the amount of fresh coolant water that is added to the system. Cascade control is again utilized. In this case the secondary or "slave" controller is located in a different location, which is the only difference between the two scenarios.

As part of a community outreach program, your company is sponsoring a haunted house. The haunted house is being constructed on site in an old, dilapidated warehouse located on the plant property. You have been put in charge of designing a scene in which a witch is creating a witch’s brew. It has been proposed that you use a reaction between “Witch’s Brew Deluxe”, a commercial compound used in the haunted house industry, dry ice, and water.

The manufacturer of “Witch’s Brew Deluxe” supplies optimal conditions for real life cauldron imitation at 30ºC water temperature. Temperatures in excess of this result in a surplus of cauldron bubbles and mist which impair the visual experience. Temperatures below this do not allow for large enough reaction rates and do not produce any steam or bubbles.

The reaction is highly endothermic, so a supply of steam has been diverted from the main plant to supply heat to the reactor. However, due to the great distance this steam is traveling, the supply steam pressure is highly variable. An uncovered, jacketed CSTR is available for use as a cauldron. A mixture of water and “Witch’s Brew Deluxe” is constantly fed into the reactor, and solid dry ice is manually feed by the operator.

What control scheme is most suitable for temperature control and why? Specifically, what should you use as the manipulated variable?

You have just recently taken a job offer from a haunted engineering firm run by a group of witches located in Salem, Massachusetts. As the new guy on the job they would like your input on which variable they should treat as the manipulated variable for the reactor temperature controller. Their reactor is an exothermic CSTR. The following reaction is what takes place within this CSTR.

The magic elixir is generally used as a wart remover but also shows promise as an antacid.

The head witch at the plant tells you that significant fouling occurs on the heat transfer surfaces because the city only allows them access to dirty water with high mineral content because they are witches and generally considered substandard citizens. She (the head witch) also points out that they have recently developed a spell to maintain the inlet temperature and pressure of their coolant water.

Which variable should be the manipulated one and why?'

The correct manipulated variable for the reactor temperature controller would be the outlet coolant temperature. This allows for a quicker response to fouled heat-transfer surfaces. Since the head witch told you that inlet temperature and pressure are constant, the configuration's weakness to changes in these two parameters can be overlooked.

Which type of REACTION is generally much easier to control?