Skip to main content
The high-energy radiation generated by the core of the sun by nuclear processes carries significantly less energy by the time it reaches even the surface of the sun. Before discussing the reasons for this, let us revisit the notion discussed in “Blackbody Radiation”, that the sun emits radiation like a blackbody. We know that black bodies emit electromagnetic radiation with a spectral distribution, or range of light wavelengths and energies, that is determined by the body's temperature1. Because the sun is so massive and contains different levels of activity, the temperature varies drastically between the core and the surface, and therefore the spectral distribution also varies. Source: <http://buffonescience7.wikispaces.com/3)++Our+Star+(Sun)+-+Ch+4.2>
The sun's core temperature is around 20,000,000 °K, yet it is not what determines the characteristic electromagnetic radiation emission from the sun, because most of this intense core radiation is absorbed by a layer of negative hydrogen ions outside the sun’s core called the convection layer. Heat from the core interior passes through the radiative zone, and then accumulates in this convection zone. Once here, currents circulate so that heat is passed to the photosphere at the surface of the sun and the cooler plasma flows back down to carry more energy to the photosphere. The convection process allows heat to be released from surface with gas, much like boiling water releases heat from the water’s surface in steam. In the particle view, photons are essentially bouncing around in the region between the core and the photosphere, losing energy and traveling through the convection zone to the photosphere. These photons are then radiated with gases which are still a very high 5760 °K. Because the sun essentially radiates like a blackbody, its spectral distribution is determined by a specific temperature; it turns out its spectral distribution is determined by the temperature of the photosphere, or the surface of the sun. Thus its spectral distribution is comparable to that of a blackbody at around 6000 °K (see Solar Radiation Outside the Earth’s Atmosphere). 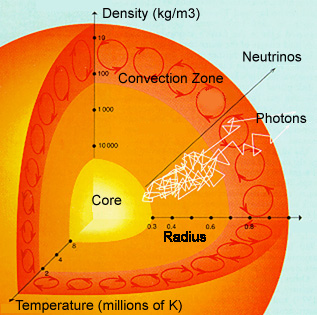