What is Collision?
Since a hash function gets us a small number for a key which is a big integer or string, there is a possibility that two keys result in the same value. The situation where a newly inserted key maps to an already occupied slot in the hash table is called collision and must be handled using some collision handling technique.

What are the chances of collisions with large table?
Collisions are very likely even if we have big table to store keys. An important observation is Birthday Paradox. With only 23 persons, the probability that two people have the same birthday is 50%.

How to handle Collisions?
There are mainly two methods to handle collision:
1) Separate Chaining
2) Open Addressing
In this article, only separate chaining is discussed. We will be discussing Open addressing in the next post.

Separate Chaining:
The idea is to make each cell of hash table point to a linked list of records that have same hash function value. 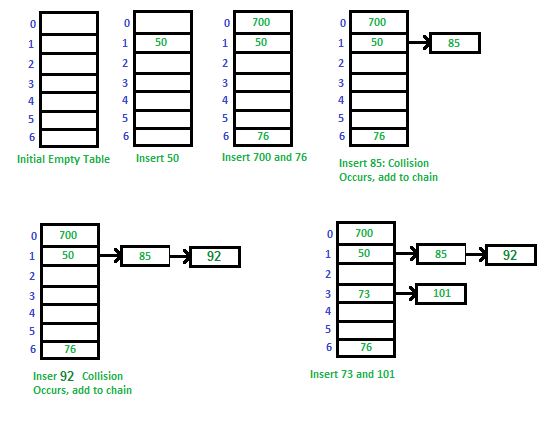 There is also a video that covers Separate Chaining