Heat exchangers are among the most common equipment in the processing industry. Plate exchangers are compact and versatile. If you have a tour of a local microbrewery, it's highly likely that you'll find plate heat exchangers in use. In terms of engineering fundamentals, our setup allows us to investigate transient heat transfer operations. Specifically, the goals of this project are for you to

Because plate heat exchangers are a well-established technology, your key references should be textbooks in heat and mass transfer. In particular,

A schematic of cross-flow in a plate heat exchanger is provided in Figure 1(a) where \(T\) denotes stream temperature, \(\omega\) is the stream mass flow rate, and subscripts \(c\) and \(h\) refer to cold and hot streams. The temperature change of each stream is sketched in Figure 1(b) as a function of total heat \(q_T\) transferred from the hot stream to the cold stream. At any point within the exchanger the differential heat \(dq\) transferred from hot to cold is

where \(U\) is the overall heat transfer coefficient and \(dA\) is the differential area available for heat transfer. As implied by Figure 1(b), the temperature difference \(\Delta T = T_h - T_c\) is approximately linear such that

Combining Eqs. (1) and (2) and integrating over the area \(A\) of the exchanger we see that

As noted above, empirical correlations exist for plate heat exchanger performance.[4] The general form is

where \(\textrm{Nu, Re,}\) and \(\textrm{Pr}\) are the Nusselt, Reynolds, and Prandtl numbers, and \(a, b,\) and \(c\) are experimentally determined coefficients. Typically, \(b \approx 2/3\) and \(c \approx 1/3\) but different authors report different values.[5] Note that correlations of this form predict different scaling behavior compared to Eqs. (3) and (4). 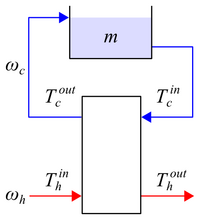 Figure 2. Heat exchanger operation under batch conditions for the cold stream. We assume \(T_h^{in}\) is approximately constant due to the hot water heater (not shown).

For this lab, we simulate batch operation through a cold water loop as shown in Figure 2 wherein a mass \(m\) of cold water is drawn from and returned to a common reservoir. The hot water inlet temperature \(T_h^{in}\) is assumed to be constant due to the hot water heater (not shown) which continuously heats a hot water reservoir. Assuming constant heat capacity \(C_p\) everywhere and a well-mixed reservoir such that \(T_m = T_c^{in}\), a control volume around the cold water reservoir implies

and the analogous form based on the hot stream gives

which will be useful in the following derivations.

In an effort to simplify the subsequent steps, we'll define

where \(\Delta T_1\) was chosen arbitrarily. As you should prove to yourself, combined with Eq. (8) and simplified using Eqs. (12) and (13), we are again left with a separable, first-order, ordinary differential equation of the form

where \(\tau_{th} = mC_p / UA\) represents a thermal timescale which relates the thermal mass \(m C_p\) of the tank to the rate \(UA\) at which thermal energy is changed, and \(\tau_r = m/\omega\) represents a residence timescale which relates the mass \(m\) of the tank to the rate \(\omega\) at which mass is recycled. As expected, the approach temperature \(T^{\prime}\) decays exponentially from its initial value \(T^{\prime}\left(0\right)\) to zero, and does so on a timescale \(\tau\) equal to \(\tau_{th} + \tau_r\) (Figure 3). A clever engineer could use these timescales to estimate how long she should operate a system in batch mode to avoid entering the large \(\tau\) regime and thus losing her thermal driving force. 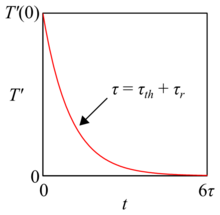 Figure 3. Approach temperature behavior for batch operation with equal flow rates. The red curve is an exponential decay characterized by two timescales as described in the text: \(\tau_{th}\), a thermal timescale, and \(\tau_r\), a residence timescale.

This experiment uses only water and therefore has minimal chemical safety considerations. Nonetheless, relevant chemical information has been listed in Table 1[6]. In the event of exposure to hot water, run cool water over the affected area and use the emergency protocols at the exits to contact Health and Safety if additional medical attention is required.

For all operation methods,