Let's extend our results to the case of many input variables. This sounds complicated, but all the ideas we need can be understood in the case of just two inputs. So let's address the two-input case.

We'll start by considering what happens when we have two inputs to a neuron: Given this, what do you think happens when we increase the weight \(w_1\) to \(w_1=100\), with \(w_2\) remaining \(0\)? If you don't immediately see the answer, ponder the question for a bit, and see if you can figure out what happens. Then try it out and see if you're right. I've shown what happens in the following movie:

Let's redo the above using the position of the step as the parameter: The number on the neuron is again the step point, and in this case the little yy above the number reminds us that the step is in the \(y\) direction. I could have explicitly marked the weights on the \(x\) and \(y\) inputs, but decided not to, since it would make the diagram rather cluttered. But do keep in mind that the little \(y\) marker implicitly tells us that the \(y\) weight is large, and the \(x\) weight is \(0\).

We can use the step functions we've just constructed to compute a three-dimensional bump function. To do this, we use two neurons, each computing a step function in the \(x\) direction. Then we combine those step functions with weight \(h\) and \(−h\), respectively, where \(h\) is the desired height of the bump. It's all illustrated in the following diagram:

Try changing the value of the height, \(h\). Observe how it relates to the weights in the network. And see how it changes the height of the bump function on the right.

This looks nearly identical to the earlier network! The only thing explicitly shown as changing is that there's now little \(y\) markers on our hidden neurons. That reminds us that they're producing \(y\) step functions, not \(x\) step functions, and so the weight is very large on the \(y\) input, and zero on the \(x\) input, not vice versa. As before, I decided not to show this explicitly, in order to avoid clutter.

Let's consider what happens when we add up two bump functions, one in the \(x\) direction, the other in the \(y\) direction, both of height \(h\): 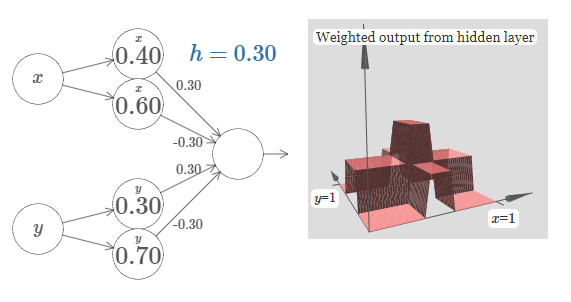 To simplify the diagram I've dropped the connections with zero weight. For now, I've left in the little \(x\) and \(y\) markers on the hidden neurons, to remind you in what directions the bump functions are being computed. We'll drop even those markers later, since they're implied by the input variable.

Try varying the parameter \(h\). As you can see, this causes the output weights to change, and also the heights of both the \(x\) and \(y\) bump functions.

What we've built looks a little like a tower function: If we could build such tower functions, then we could use them to approximate arbitrary functions, just by adding up many towers of different heights, and in different locations: Of course, we haven't yet figured out how to build a tower function. What we have constructed looks like a central tower, of height \(2h\), with a surrounding plateau, of height \(h\).

But we can make a tower function. Remember that earlier we saw neurons can be used to implement a type of if-then-else statement:

That was for a neuron with just a single input. What we want is to apply a similar idea to the combined output from the hidden neurons:

Can you see how to do this? Try experimenting with the following network to figure it out. Note that we're now plotting the output from the entire network, not just the weighted output from the hidden layer. This means we add a bias term to the weighted output from the hidden layer, and apply the sigma function. Can you find values for hh and bb which produce a tower? This is a bit tricky, so if you think about this for a while and remain stuck, here's two hints: (1) To get the output neuron to show the right kind of if-then-elsebehaviour, we need the input weights (all \(h\) or \(−h\)) to be large; and (2) the value of bb determines the scale of the if-then-else threshold. With our initial parameters, the output looks like a flattened version of the earlier diagram, with its tower and plateau. To get the desired behaviour, we increase the parameter hh until it becomes large. That gives the if-then-else thresholding behaviour. Second, to get the threshold right, we'll choose \(b≈−3h/2\). Try it, and see how it works!

Even for this relatively modest value of hh, we get a pretty good tower function. And, of course, we can make it as good as we want by increasing \(h\) still further, and keeping the bias as \(b=−3h/2\).

Let's try gluing two such networks together, in order to compute two different tower functions. To make the respective roles of the two sub-networks clear I've put them in separate boxes, below: each box computes a tower function, using the technique described above. The graph on the right shows the weighted output from the second hidden layer, that is, it's a weighted combination of tower functions. In particular, you can see that by modifying the weights in the final layer you can change the height of the output towers.

The same idea can be used to compute as many towers as we like. We can also make them as thin as we like, and whatever height we like. As a result, we can ensure that the weighted output from the second hidden layer approximates any desired function of two variables: What about functions of more than two variables?

Let's try three variables \(x_1,x_2,x_3\). The following network can be used to compute a tower function in four dimensions: By gluing together many such networks we can get as many towers as we want, and so approximate an arbitrary function of three variables. Exactly the same idea works in \(m\) dimensions. The only change needed is to make the output bias \((−m+1/2)h\), in order to get the right kind of sandwiching behavior to level the plateau.