Charge Common conduction phenomena involve more than one charge species. Media supporting one positive and one negative species are used here to illustrate interactions between carriers caused by space-charge fields, recombination and generation. The method of characteristics is further developed as a means of understanding the evolution of the charge distributions. Based on the bipolar model of this section, the limit of ohmic conduction is examined in the next section.

Each of the charge species is governed by a conservation equation taking the form of Eq. 5.2.3:

where the current density relative to the moving material is

Consider some physical situations to which these expressions pertain. Because pairs of charged particles are generated and recombined, \(G_+ = G_{-} \equiv G\) and \(R_+ = R_{-} \equiv R\).

Positive and Negative Ions in a Gas

Perhaps by means of a corona discharge, a flame or a radio-active source, ion pairs are created and then carried into the region of interest by a gas flow or by an electric field. With the proviso that the charge per particle of each species has the same magnitude, \(q_{\pm} = q\), recombination results in the creation of a neutral particle. Carriers can recombine at a rate-that is proportional to the product of the charge densities:\(^1\)

One recombination results in the loss of one particle from each of the species,. so \(R_{\pm}\) is the same in the two equations summarized by Eq. \ref{1}.

A radioactive source of \(\alpha\) or \(\beta\) particles could be used to create a generation term, \(G_{\pm}\), that would then be dependent on the density of neutral particles at not only the point in question, but points in the gas between the radioactive source and the point of interest, since these could contribute to the slowing and hence final absorption of the ionizing particle.

In liquids, thermal processes result in dissociation (ionization) of constituent molecules. For example, in pure water, a small fraction of the \(H_20\) molecules disassociate into \(H_+\) and \(OH^{-}\) ions. With these constituting the positive and negative species, there is a local thermal generation of ion pairs that is proportional to the number density, \(n\), of neutral molecules:

and a recombination rate given by Eq. \ref{3} with \(\varepsilon_o + \varepsilon\). In the terminology of chemical kinetics, the re-combination process would be regarded as a second order rate process.\(^3\)

When dissolved, materials such as \(NaCl\) or \(KC1\) tend to disassociate into positive and negative ions, \(Na^+C1^-\) and \(K^+Cl^-\). These then contribute to the conduction and, in this regard, can dominate over the intrinsic ionization. In that case, the conduction is represented in terms of just the two species, but it is also important to recognize that the unionized neutral molecules represent a third species. The number density, \(n\), of this species is now, like the ion number densities \(n_+\) and \(n_{-}\), a function of space and time.

To describe the evolution of the neutral particles, a conservation equation is written much as for the ions, Eq. \ref{1}. However, because these particles are not charged, the only particle current density is due to diffusion. The migration term in Eq. \ref{2} is absent. Also, generation of ion pairs now means that neutral particles are lost, and recombination means that neutrals are gained. Hence, terms on the right-hand side of the conservation equation are the negatives of those on the right in Eq. \ref{1}:

Each of the illustrative situations that have been outlined can be described by deleting the inappropriate terms from the laws now summarized. The two charge densities contribute to Gauss' law:

where polarization is modeled as being linear and hence represented by the permittivity \(\varepsilon\). In the following discussions is taken as being uniform. The electric field is irrotational, and so

With the understanding that the given material deformations are incompressible (that \(\nabla \cdot =\overrightarrow{v} = 0\)), thecarrier evolutions are represented by Eqs. \ref{1} and \ref{2}, which in view of Gauss' law, Eq. \ref{7}, combine to become the two equations

Here, Eqs. \ref{3} and \ref{5} are used to represent the recombination and generation. If n is a constant, or the generation term is absent, then the law governing the neutrals is not required; but if the neutral evolution is also part of the story, then Eq. \ref{6} is added to the list:

With the understanding that lengths of interest are large enough to justify ignoring the diffusion contributions to Eqs. \ref{9} and \ref{10} (typically, the ratio given by Eq. 5.2.12 is small), Eqs. \ref{9} can be written in the characteristic form introduced in Sec. 5.3:

Here, the time rate of change is measured by an observer moving respectively with the \(\pm\) ions, on the characteristic lines

Following a particle of the neutral material, the neutral number density changes with time inaccordance with the local balance between generation and recombination. What makes the bipolar situation more complex than for unipolar migration is that not only are the positive and negative species described by Eqs. \ref{11} along different characteristic lines, but the space-charge term on the right has an effect that is proportional to the net charge, generally with contributions from both species.

Here, subscripts are used to distinguish the characteristic lines. Thus the first two equations respectively apply along lines in the \((x-t)\) plane represented respectively by the third and fourth expressions. Similarly, the fifth equation applies along the lines defined by the sixth expression.

In numerically integrating these equations it is convenient to take account of Gauss' law, Eq. \ref{7},by having equations for the time rates of change of the electric field for an observer moving along of the respective characteristic lines.\(^4\) each To this end, the time rate of change of Eq. \ref{7} is written as

The difference between Eqs. \ref{9} becomes

With the initial values of all quantities on the right in Eq. \ref{15} established, it is now possible to begin marching forward in time.

In the integration scheme used to generate the distributions shown, a predictor-corrector sub-routine is used which calls a user-written subroutine for evaluation of derivatives (Eqs. \ref{15}) after each prediction or correction step. Because Eqs. \ref{15} are a set of coupled ordinary nonlinear differential equations, there are readily available routines for carrying out the main integration (compiled subroutines for predictor-corrector integration are available, for example, in the International Mathematical & Statistical Library).

The charge and neutral density profiles are conveniently initiated with step singularities. In order to prevent the smearing out of these step edges, a two-point (linear) interpolation is used when near these edges, so that the data on one side of the edge does not influence the interpolated values on the other side.

(The numerical analysis of this section was carried out by R. S. Withers)A situation which is the basis for gaining physical insights in this and the next section is sketched in Fig. 5.8.3. When \(t = 0\), equal amounts of positive and negative charge uniformly occupy the region next to the lower screen, with the region above initially free of charge. Initially, neutral particles are absent throughout and there is no generation at any time. Because the effect of the convection in one dimension is to translate the material in the x direction, the material velocity \(U\) is taken as zero. Hence, the model is appropriate to describing what might be considered a "conducting layer" adjacent to an insulating layer of material sandwiched between plane-parallel electrodes. It is assumed that charged particles leaving the region by arriving at one or the other of the electrodes are neutralized and removed from the volume. Further, charged particles cannot be generated at the electrode surfaces, and hence characteristic lines emanating from the electrodes carry no associated particle density.

Considerable insight can be extracted from this example by identifying the dominant processes in each of the regions demarked in Fig. 5.8.5 by critical characteristic lines. In region \(I\), bounded by \(x_+\) originating at the lower electrode and x. originating at the initial interface between the charged layer and the region above, the initial charge densities at \(A\), \(A'\), and \(A"\) are the same. It follows that these initial points can be chosen such that \(B\) and \(B'\) occur at the same time (on the same line \(t = constant\)). Also, the initial conditions are the same so the values of \(\rho_+\) and of \(\rho_{-}\). at the points \(B\) and \(B'\) are the same. In turn, the value of the charge densities at \(C\) are the same as at other positions in region \(I\) at this same time. It is concluded that Eqs. \ref{15}a and \ref{15}b describe the time dependence at any given fixed location \(x\) in region \(I\). In the example, initial conditions set \(\rho_+ = \rho_{-}\) and these equations reduce to the same equation for subsequent times. Thus, the net charge density \(\rho_+ - \rho_{-}\) is zero in region \(I\), and, through recombination alone, the individual charge species decay ac-cording to the law

where Eq. 5.8.4, the Langevin recombination coefficient, has been used.

Because there is no generation, the recombination simply feeds the neutral equation, and Eq. \ref{15} e shows that in region \(I\)

Region \(II\), like region \(I\), has uniform initial conditions, so the same arguments apply. But, the initial conditions on \((\rho_+, \rho_{-},n)\) are all zero, and so these quantities remain zero throughout. It follows from the characteristic electric field equations, Eqs. \ref{15}g - \ref{15}j, that \(E\) is uniform in this region.

Region \(IV\), where the positive charges are moving upward along the \(E\) lines but the negative charges have been swept downward, is of essentially the unipolar character of region \(III\). Because charges do not originate on the upper electrode, region \(VII\) is also unipolar.

The neutral characteristics, xn, do not enter into the classification of regimes because the coupling to \(n\) is "one-way." But, neutrals created by recombination remain behind the \(x\). wavefront defining the demarcation of regions \(IV\) and \(I\). As a result, the distribution of \(n\) at a given time is uniform in region \(I\) (with amplitude given by Eq. \ref{23}) and makes a smooth transition to zero at the initial location of the region \(IV-I\) interface. 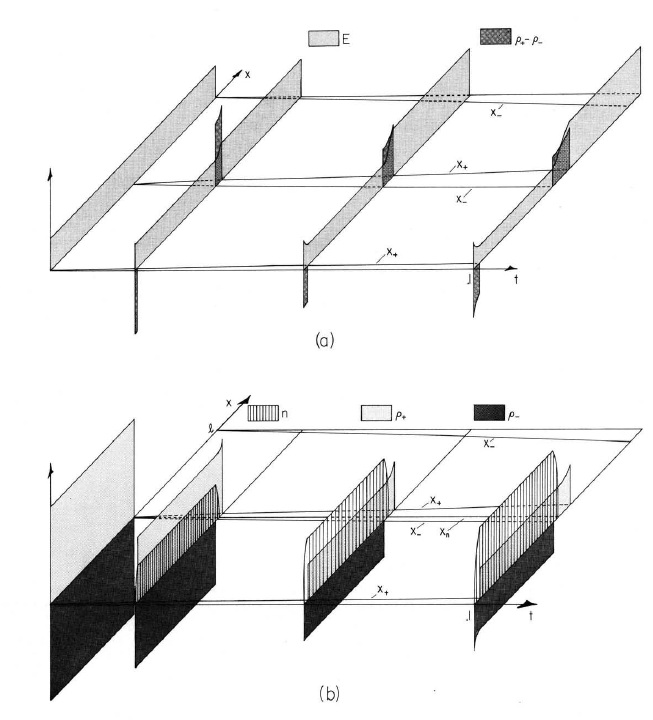