The Smith chart is a powerful graphical tool and mastering the Smith chart is essential to entering the world of RF and microwave circuit design as all practitioners use this as if it is well understood by others. It takes effort to master but fundamentally it is quite simple combining a polar plot used for plotting \(S\) parameters directly, curves that enable normalized impedances and admittances to be plotted directly, and scales that enable electrical lengths in terms of wavelengths and degrees to be read off. The chart has many numbers printed in quite small font and with signs dropped off as there is limited room.

The Smith chart was invented by Phillip Smith and presented in close to its current form in 1937, see [1, 2, 3, 4]. Once nomographs and graphical calculators were common engineering tools mainly because of limited computing resources. Only a few have survived in electrical engineering usage, with Smith charts being overwhelmingly the most important. 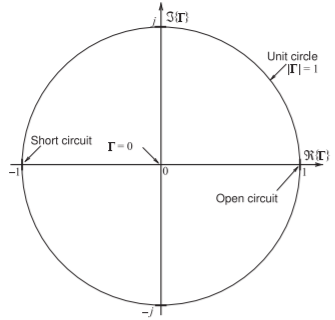 illustrate how a Smith chart is read and used to implement simple designs. The Smith chart presents a large amount of information in a confined space and interpretation, such as applying appropriate signs, is required to extract values. The Smith chart is a ‘back-of-the-envelope’ tool that RF and microwave circuit designers use to sketch out designs.

Commonly in network design reactive elements are added either in shunt or in series to an existing network. If a reactive element is added in series then the input reactance, \(x\), is changed while the input resistance, \(r\), is held constant. So superimposing the loci of \(\Gamma\) (on the \(S\) parameter polar plot) with fixed values of \(r\), but varying values of \(x\) (\(x\) varying from \(−∞\) to \(∞\)), proves useful, as will be seen. Also, plotting the loci of \(\Gamma\) with fixed values of \(x\) and varying values of \(r\) (\(r\) varying from \(0\) to \(∞\)) is also useful. The combination of the reflection/transmission polar plots, the nomographs, and the \(r\) and \(x\) loci is called the impedance Smith chart, see Figure \(\PageIndex{5}\). This is still a polar plot of reflection coefficient and the arcs and circles of constant and resistance enable easy conversion between reflection coefficient and impedance. Figure \(\PageIndex{5}\): Impedance Smith chart. Also called a normalized Smith chart since resistances and reactances have been normalized to the system reference impedance \(Z_{\text{REF}}: z = Z/Z_{\text{REF}}\). A point plotted on the Smith chart represents a complex number \(A\). The magnitude of \(A\) is obtained by measuring the distance from the origin of the polar plot (the same as the origin of the Smith chart in the center of the unit circle) to point \(A\), say using a ruler, and comparing that to the measurement of the radius of the unit circle which corresponds to a complex number with a magnitude of \(1\). The angle in degrees of the complex number \(A\) is read from the innermost circular scale. The technique used is to draw a straight line from the origin through point \(A\) out to the circular scale. The impedance to be synthesized is reactive so the termination must also be lossless. The simplest termination is either a short circuit or an open circuit. Both cases will be considered. Choose a transmission line with a characteristic impedance, \(Z_{0}\), of \(100\:\Omega\) so that the desired normalized input impedance is \(\jmath 140\:\Omega /Z_{0} = 1.4\jmath\), plotted as point \(\mathsf{B}\) in Figure \(\PageIndex{8}\).

First, the short-circuit case. In Figure \(\PageIndex{8}\), consider the path \(\mathsf{AB}\). The termination is a short circuit and the impedance of this load is Point \(\mathsf{A}\) with a reference length of \(\ell_{A} = 0\lambda\) (from the outermost circular scale). The corresponding reflection coefficient reference angle from the scale is \(θ_{A} = 180^{\circ}\) (from the innermost circular scale labeled ‘WAVELENGTHS TOWARDS THE GENERATOR’ which is the same as ‘wavelengths away from the load’). As the line length increases, the input impedance of the terminated line follows the clockwise path to Point \(\mathsf{B}\) where the normalized input impedance is \(\jmath 1.4\). (To verify your understanding that the locus of the refection coefficient rotates in the clockwise direction, i.e. increasingly negative angle as the line length increases, see Section 3.3.3 .) At Point \(\mathsf{B}\) the reference line length \(\ell_{B} = 0.1515\lambda\) and the corresponding reflection coefficient reference angle from the scale is \(θ_{B} = 71.2^{\circ}\). The reflection coefficient angle and length in terms of wavelengths were read directly off the Smith chart and care needs to be taken that the right sign and correct scale are used. A good strategy is to correlate the scales with the easily remembered properties at the open-circuit and short-circuit points. Here the line length is

and the electrical length is half of the difference in the reflection coefficient angles, Figure \(\PageIndex{8}\): Design of a short-circuit stub with a normalized input impedance of \(\jmath 1.4\). The path \(\mathsf{AB}\) is actually on the unit circle but has been displaced here to avoid covering numbers. The electrical length in wavelengths has been read from the outermost circular scale, and the angle, \(\Theta\), in degrees refers to the angle of the polar plot (and is twice the electrical length). retains the signs making it easier to follow some of the discussions and examples. It is important that the user readily understand the annotations on the less dense form of the Smith chart, see Figure \(\PageIndex{10}\)(b). The impedance \(z = 1−2\jmath\) is plotted as Point \(\mathsf{A}\) in Figure \(\PageIndex{12}\)(b). To read the admittance from the chart, the lines of constant conductance and constant susceptance must be interpolated from the arcs and circles provided. The interpolations are shown in the figure, indicating a conductance of \(0.2\) and a susceptance of \(0.4\jmath\). Thus

A good amount of microwave design, such as designing a matching network for maximum power transfer, involves beginning with a load impedance plotted on a Smith chart and inserting series and shunt reactances, and transmission lines, to transform the impedance to another value. The preferred view of the design process is that of a reflection coefficient that gradually evolves from one value to another. That is, in the case of a series reactance, the effect is that of a reflection coefficient gradually changing as the reactances increase from zero to its actual value. The path traced out by the gradually evolving reflection coefficient value is called a locus. The loci of common circuit elements added to various loads are shown in Figure \(\PageIndex{13}\). For each locus the load is at the start of the arrow with the value of the element increasing from zero to its actual final value at the arrow head. Microwave design often proceeds by taking a known load and transforming it into another impedance, perhaps for maximum power transfer. Smith charts are used to show these manipulations. In design the manipulations required are not known up front and the Smith chart enables identification of those required. Except for particular situations, lossless elements such as reactances and transmission lines are used. The few situations where resistances are introduced include introducing stability in oscillators and amplifiers, and deliberately reduce signals levels. Most of the time introducing resistances unnecessarily increases noise and reduces signal levels thus reducing critical signal-to-noise ratios.

The circuit in Figure \(\PageIndex{14}\) will be used to illustrate the manipulations on a Smith chart. The most common view is to consider that the Smith chart is a plot of the reflection coefficient at various stages in the circuit, i.e., \(\Gamma_{A},\:\Gamma_{B},\:\Gamma_{C},\:\Gamma_{D},\) and \(\Gamma_{\text{IN}}\). Additionally the load, \(Z_{L}\), is plotted and reactances, susceptances, or transmission lines transform the reflection coefficient from one stage to the next. Yet another concept is the idea that the effect of an element is regarded as gradually increasing from a negligible value up to the final actual value and in so doing tracing out a locus which ends in an arrow head. This is the approach nearly all RF and microwave engineers use. The manipulations corresponding to the circuit are illustrated in Figure \(\PageIndex{15}\). The individual steps are identified in Figure \(\PageIndex{16}\). The first few steps are confined to the top half of the Smith chart which is repeated on a larger scale in Figure \(\PageIndex{17}\) for the first three steps. In step 3 a capacitor with susceptance \(X_{BA}\) is in shunt with \(Z_{A}\) and the reflection coefficient transitions from point \(\mathsf{A}\) to point \(\mathsf{B}\). The locus of this operation follows a circle of constant conductance with only they susceptance changing. The final value must be calculated as \(b_{B} = b_{A} + b_{BA}\). The susceptance \(b_{B}\) is read from the graph as \(−0.784\). This value is read by following the arc of constant susceptance out to the unit circle where a value of \(0.784\) is read. Note that the arc must be interpolated and that the user must realize that the susceptance is negative in the top half of the Example \(\PageIndex{4}\): Reflection Coefficient of a Shorted Microstrip Line on a Smith Chart

Design often requires switching between admittance and impedance. So it is convenient to use the colored combined Smith chart shown in Figure \(\PageIndex{11}\). Monochrome charts were once the only ones available and an impedance Smith chart was used for admittance-based calculations provided that reflection coefficients were rotated by \(180^{\circ}\). This form of the Smith chart is not used now and is very confusing.

The Smith chart is the most powerful of tools used in RF and Microwave Design. Design using Smith charts will be considered in other chapters but at this stage the reader should be totally conversant with the techniques described in this section.