Electrochemical Impedance Spectroscopy (EIS) is a highly sensitive characterization technique used to establish the electrical response of chemical systems in a nondestructive manner. EIS systems characterize the time response of chemical systems using low amplitude alternating current (AC) voltages over a range of frequencies. Using an electrode setup consisting of a working, reference, and counter electrodes a known voltage is passed from the working electrode through an electrolytic solution and into the counter electrode. Quantitative measurements are produced by the EIS and enable the evaluation of small scale chemical mechanisms at the electrode interface and within the electrolytic solution. Therefore, EIS is useful in determining a wide range of dielectric and electrical properties of components in research fields studying batteries, corrosion, etc.

An electrochemical cell is used to house the chemical reaction and is electrically connected to the electrochemical spectrometer to obtain the electrical response of an electrolytic solution. EIS systems are operated using computer programs specifically designed for EIS testing. Therefore, prior to conducting an EIS experiment it is essential that all components of the system be attained.

Generally, EIS studies utilize a three electrode mode which is comprised of a working electrode (the sample material), a counter electrode (commonly graphite or platinum), and a reference electrode. While electrode geometries may vary the general experimental setup remains similar to the procedure outlined below.

Four leads are used to attach the three electrodes to the EIS frequency response analyzer. A working lead and a counter lead are used to carry current, whereas the working sense lead and reference leads are used to sense voltage. The working lead and working sense lead connect the exposed end of the working electrode to the EIS. The reference lead is attached to the reference electrode and the counter lead is connected to the counter electrode. The fourth lead is recommended to ground the system during testing. Once all leads are connected, the EIS system is setup and ready for testing.

Ohm's Law is used within many common electrical circuits to define resistance [R]:

However, this relationship between current [I] and potential [E] only applies to direct current (DC) applications and some unique cases of AC where frequency is given at 0 Hz. Potential values are measured in voltage [V], current is measured in amperes [A], and resistance is measured in ohms [Ω]. The more inclusive AC analog to Ohm’s Law is given by:

when frequency is non-zero and impedance [Z] is given in ohms. Although only present in alternating current (AC) systems, impedance works in a similar manner as resistance to oppose the flow of current or movement of electrons. Resistance is less restricted by the system mode and can occur in both direct current (DC) or AC systems. Therefore, impedance is the total electron opposition within a circuit and often presented as a complex number that takes into account contributions from resistors, capacitors, and inductors.

The complex impedance can be presented in both polar and Cartesian coordinates.

The Cartesian form reveals that resistance (R) is the real component of the complex impedance, where as X is the imaginary portion. X is the reactance which is determined by taking the sum of inductance and capacitance. Therefore, expressing impedance as a complex number designates resistance as the real component and the sum of capacitance and inductance as the imaginary component or reactance. 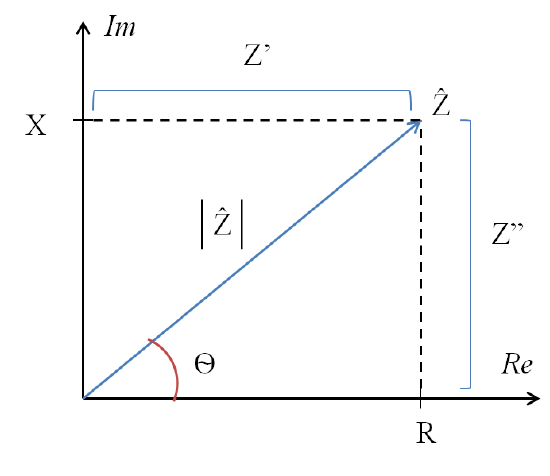 In Figure 2, complex impedance is represented as the vector Z which consists of both magnitude (|Z|) and phase (Ѳ). The complex form of impedance evaluates the voltage-current ratio for a single response at a designated frequency [w]. This response is given in terms of ohms and presented using the polar form in order to easily relate voltage and current amplitude and phase. 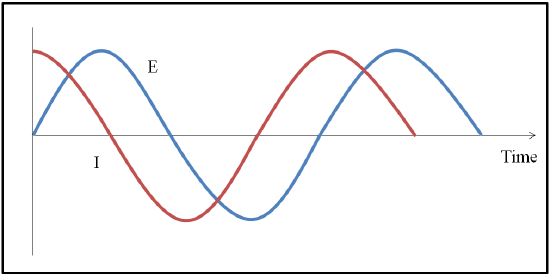 Variations in the ability of capacitors and inductors to restrict the flow of electrons between AC circuits are expected. Therefore, the amount that resultant current response [I] determined using EIS will deviate from the input potential [E] based on how the sample interacts with the applied voltage. The time dependent responses of phase and amplitude changes can reveal how electrons interact with the electrode surface as well as information about ion size or type.

Utilizing simple geometric properties, the impedance vector can be rewritten as:

where Z’ is the real component and Z” is the imaginary component. The absolute magnitude of the impedance component can therefore be given using the quadratic formula.

Furthermore, the phase angle can be defined as:

Electrode material properties and ionic properties of the electrolyte will alter the real and imaginary impedance components. Therefore, a repeatable evaluation method is required in EIS testing.

In Table 1, w is the frequency, C is the capacitance, L is the inductance, j is the complex component, t is time and E, Z, R, I are all consistent with the previously established relationships for potential, impedance, resistance, and current respectively.

The most common circuit analog model is the simplified Randles Cell that represents the equivalent circuit for the interface between electrolyte and electrode for a single electrochemical cell. Within this circuit the uncompensated electrolyte resistance (Rs), polarization resistance (Rp), and double layer capacitance (Cdl) are all taken into account.

Simplifying the components of the EIS system allows for a comprehensive understanding of how the various component interact with the chemical and electrical system properties. Although, Randles Cell does not accurately model all electrochemical systems it serves as a stepping stone for more complex models.

where A is the fixed area, l is the length a uniform amount of current is carried, and p is the solution resistivity. However, because conductivity, k, is more widely used the reciprocal of resistivity is taken to produce a functional solution resistance equation:

Therefore, the solution resistance can be found by recording the conductivity of an electrolyte and calculating the second electrolyte resistance equation. If experimental determination of conductivity cannot be attained, standard chemical handbooks present k values for certain solutions. Standard units for conductivity are given as Seimens per meter (S/m) or the reciprocal of ohm (1/ohm).

Figure 5. Anion and cation distribution within an EIS cell from charged to uncharged conditions.

When a potential difference is introduced to the electrochemical cell, charged ions will begin to move toward the electrode of opposite charge. The interface between the electrode and the electrolyte is known as the electrical double layer. Therefore, as a result of ion absorption when the electrode charging is complete the cell acts as a capacitor to store charge. Conversely, ion desorption occurs during discharging when an opposing current in produced and ions are pushed away from one another. When the energy produced during discharge is high enough light may be produced.

Polarization resistance assesses the changes in the applied potential (E) and compares those values with the resulting polarization current (i).

EIS is a simple method for translating complicated chemical responses to an electronic mode that can be interpreted and utilized in future studies. As seen with the Randles Cell, these responses are more precisely represented through use of an analogous electronic circuit which takes into account resistance and capacitance. Therefore, the impedance produced during electrochemical experimentation can be evaluated through use of one or more equivalent circuits. Although determining analogous circuits may be difficult, establishing an accurate model can lead to verification of mechanical modes which occur in a given system. These techniques can be used in numerous research areas for a wide range of applications.﻿ Figure 7. Potential applications for EIS research and use.

The Nyquist plot for simplified Randles cell assumes that a 1 cm2 electrode experiences 1mm uniform corrosion per year. Using the figure below along with the knowledge that the capacitance is 40 µF/cm2 and the solution resistance, Rs, is 20 Ω, what is the polarization resistance, Rp? An electrode is 35 mm tall and 100 mm wide. What is the lowest expected capacitance for the electrical double layer?

During an experiment, the EIS recorded a large change in potential and a small change in polarization current. What is the expected outcome for corrosion resistance of the working electrode?

[4] Lasia, A. “Electrochemical Impedance Spectroscopy and its Applications,” Modern Aspects of Electrochemistry (1999) 143-248.