Optical computing is the use of photons in computation. Photons, effectively massless and incredibly fast, are generated using diodes or lasers. The photons take the place of electrons in more traditional computers and are used to represent the flow of data. Lacking the size limitation of electrons, photon based transistors can be incredibly small which increases potential computing power.

Computers function using on or off states called bits. These bits are traditionally written as ones and

zeroes and are stored in a computer's memory in a transistor (Figure 1). A single transistor can be used thousands or millions of times per second but can only handle one piece of information during each use. Limitations on time and speed of transistors are determined by heat generation and charging/discharging the wire (usually copper) connected to the transistor. A grouping of eight bits can represent up to 256 possibilities and is the base size when referring to capacity of digital storage. The more complex the data the more bits, or transistors, are required to represent it. As more transistors are placed on a chip the amount of data that can be processed as well as the heat generated increases.

Lasers are coherent monochromatic beams of light emitted by excited populations of atoms. The atoms are trapped between two mirrors, one with 100% reflectivity and the other ~98%, and then stimulated in a process called photon pumping (Figure 4). When an electron absorbs the energy of a photon it can be raised in energy to its excited or higher energy state. The relaxation process is exactly the reverse, where an excited electron relaxes to its normal state and emits a photon with energy equal to the difference in states. Photons perpendicular to the mirrors are trapped and sent back toward the atom population. When a population of atoms, be them in a solid, liquid, or gas, are excited and emitting a cascade of illumination is set up where they are then exciting one another. The atoms are soon largely excited and a population inversion takes place, where most or all of the atoms are emitting into one another and the ~2% loss is sent out as a laser. This difference is both coherent and monochromatic, meaning that all photons are of the same polarity and wavelength.

LED's, or light-emitting diodes, are pn junctions made of extrinsic semiconducting materials. When a voltage equal to or greater than the material's band gap a photon is released. Each band gap corresponds with a single wavelength of light. Laser LED's can emit coherent light, but this is not the case for most LED's.

The End of Electron-Based Computing postage stamp. In 1965 co-founder of Intel, Gordon Moore, predicted the number of transistors fitting onto a chip doubling every two years. This prediction was later called Moore's Law and was very accurate up through the beginning of the 21st century (Figure 5). While the exponential growth predicted hasn't stopped completely it has slowed down. Today silicon transistors rapidly approach ~10nm across, the theoretical minimum size for electron-based computing. This limitation is due to the quantum nature of electrons, where the electron can simply tunnel through the transistor as if it weren't there. The 5nm minimum size imposes a maximum number of transistors and maximum speed of computation. This limitation can be mitigated by parallel processing, or multiple processors running in tandem, but this in turn generates more heat and is difficult to program for. Current chips are made with a two dimensional model, they could be made three dimensional to increase possible number of transistors but this increases cooling problems (cooling is related to surface area, a cube has much less than a chip of similar volume), power consumption, as well as tunneling issues as before.

Another fundamental limitation of electron based computing is the use of electrons. In addition to quantum tunneling they travel relatively slowly. A material's drift velocity is the speed at which electrons move in a wire. Silicon's drift velocity depends on temperature, doping, and applied current, but tops out in the range of 107 cm/s for undoped silicon. This figure is slightly misleading in that one does not need the original electron sent to arrive at a destination, but the electron that your sent electron smashed into and catapulted forward many times over. This propagation wave is approximately the speed of light. The major slowdown of electron use comes from the necessity of charging/discharging the transistors and their connections. The minimum time for this action is in the realm of nanoseconds.

Mechanisms and Advantages of Optical Computing

Photons, be them generated by lasers, LED's, or some other 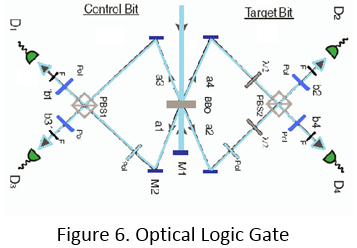 means, can be used to encode for data the same as electrons today. Optical transistors are slowly being designed and implemented which will eventually allow for an entirely optical computer. Optical transistors of several designs are being experimented with. A simple polarizing screen that turns ninety degrees will effectively shut off a beam of light. Dielectrics are materials that can become polarizers when an electric current is applied and have been used as optical transistors. Optical logic gates (Figure 6) are more difficult but are fundamentally possible. They would use multiple beams, one control, one or more to be computed, and would result in a logical output.

Electrons have one advantage in that copper wires or silicon channels can turn and the electrons will follow. To emulate this effect optical chips may consist of plasmonic nanoparticles to turn corners and continue their use without significant loss of power or conversion into electrons.

Optical computing has several advantages over traditional electron-based computing. Photons of different wavelengths do not interact with one another, so when a laser of wavelength A is used to encode information A, it can be superimposed with laser of wavelength B, C, D and so on. This layering, known as multiplexing (Figure 7) in fiber optics, allows simultaneous data flow across a single channel, a significant improvement over copper wires. The speed of light in a vacuum is 3x10^8 m/s, roughly equivalent to electric propagation through a wire. Optical transistors, unlike electron-based ones, can re-cycle roughly every picosecond, or one thousand times faster than an electron based transistor. While passing through a chip coherent light of the correct wavelength does not release heat or consume energy. One major hurtle is that, due to the enormous speed of photons, it can be difficult to pin down exactly where that photon is located. Photons do not quantum tunnel, so as techniques and technologies improve optical transistors may be as small as we can make them.

There is currently a large push to enable optical computing using the same techniques as used with silicon today. This would allow the use of today's production facilities to create the computers of tomorrow. One of the leaders in this push is Intel, the creater's of an integrated silicon photonics link which can transmit fifty gigibits per second (at 12.5 Gbit/sec per wavelength using 4 multiplexed wavelengths) of uncorrupted information. This is an electrical to optical to electrical translation device, so is a stepping stone to full optical computing. In 2013 Carolyn Ross, a professor at MIT, announced progress toward an all optical chip where photons did not need to be translated into electrons for processing on a silicon based chip. This chip treated each photon as a bit of information, reducing power consumption and heat generation.

In the not too distant future fully optical computers will be realized. These computers will only use electricity to power LED's, diodes, or laser emitters, using