In some respects mesh analysis is a mirror of nodal analysis. While nodal analysis leverages KCL to create a series of node equations that are used to solve for node voltages, mesh analysis uses KVL to create a series of loop equations that can be solved for mesh currents. A mesh current should not be confused with a branch current. While branch currents represent the current flowing through a particular component, mesh currents combine to create branch currents. That is, the current through any particular component may be an individual mesh current or a combination of two mesh currents. Circuits using complex series-parallel arrangement with multiple voltage and/or current sources may be solved using this technique. It is, however, limited to planar circuits. Planar circuits are those that can be drawn on a flat plane without having any of their wires cross. In essence, these circuits can be drawn so that they appear like a series of window panes. Non-planar circuits may be 3D in appearance and in such a circuit it becomes impossible to define the loop equations as any given component might have more than two meshing currents.

Consider the circuit of Figure 7.3.1 . We begin by designating a series of loops. These loops should be minimal in size and cover all components at least once. By convention, the loops are drawn clockwise. There is nothing magic about them being clockwise, it is just a matter of consistency. The current path along a loop is referred to as a mesh current. In the circuit of Figure 7.3.1 we have two loops, and thus, two mesh currents, \(I_1\) and \(I_2\). Note that all components exist in at least one loop (and sometimes in more than one loop, like \(R_3\)). Depending on circuit values, one or more of these loop's directions may in fact be opposite of reality. This is not a problem. If this is the case, the currents will show up as negative values, and thus we know that they're really flowing counter-clockwise.

We begin by writing KVL equations for each loop.

Assuming that the resistor values and source voltages are known, we have two equations with two unknowns. These can be solved for \(I_1\) and \(I_2\) using simultaneous equation solution techniques such as determinants or Gauss-Jordan elimination. The first step is to define a set of clockwise loops that are of minimum size and which cover all components. These loops are drawn in Figure 7.3.3 . Also, the polarities of the voltage drops produced by these currents are drawn next to the components in the same color for easy identification. Note that some components see only one current, such as the 3 k\( \Omega \) resistor that sees only \(I_2\); and some see two currents in opposing directions, such the 5 k\( \Omega \) resistor that sees both \(I_2\) and \(I_3\). With multiple current directions flowing through a single component, obeying the resulting voltage polarities becomes very important. Figure 7.3.3 : Circuit of Example 7.3.1 with current loops and polarities added.

We now write KVL summations around each loop. If the current passing through a component sees a polarity of + to − then this is counted as a voltage drop while the reverse counts as a voltage rise. This is true even for voltage sources (i.e., a voltage source may appear negative in one loop and positive in another).

These are expanded using Ohm's law. The current for the loop under consideration is deemed positive while any opposing (i.e., meshing) current is deemed negative:

In order to verify the results of the analysis, the circuit is entered into a simulator and a virtual voltmeter is placed across the 5 k\( \Omega \) resistor. This is shown in Figure 7.3.4 . The results agree nicely with the original analysis.

As nice as this is, in a practical circuit we need to be concerned about the effects of component tolerance. It would be extraordinarily odd if during production each resistor was equal to precisely the nominal value specified. In reality, each resistor will have a stated tolerance. Thus, with all five resistors changing slightly from unit to unit, we should expect the currents and voltages to vary as well. The question is, what would be a typical spread? This can be addressed via a Monte Carlo analysis. This analysis is, in fact, a series of simulations. Each simulation uses randomized component values that fall within the stated tolerance spread. For example, if we specify that the 1 k\( \Omega \) resistor has a 5% tolerance, then the actual resistor used for a simulation will be a randomly generated value between 950 \( \Omega \) and 1050 \( \Omega \). We then state how many trials we'd like, each one using their own unique randomized values for each component. The results of a Monte Carlo analysis using the DC operating point simulation is shown in Figure 7.3.5 . Ten randomized trials were generated for the value of \(V_b\). Each of the five resistors was assigned a tolerance of 5%. As can be seen, voltage values both above and below the nominal simulation can result. 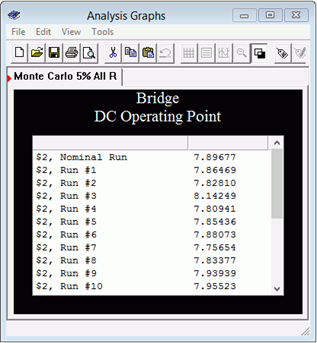 While it is possible to extend this technique to include current sources, it is often easier and less error-prone to convert the current sources into voltage sources and continue with the direct inspection method outlined above. Either way, it is important to remember that the number of loops determines the number of equations to be solved.

Repeat the process for loops 2 and 3:

Note that the 20 volt source shows up positive because of the direction of \(I_3\) (into the negative terminal and out of the positive terminal).

Sometimes you may run across a current source which has no associated internal resistance, such as found in the circuit of Figure 7.3.8 . This is similar to the situation seen previously under nodal analysis where a voltage source does not have a specified internal resistance. There are two ways of solving this predicament. The first is add a very large resistance in parallel with the current source and then perform a source conversion on the pair so that the inspection method of mesh can be followed. The larger the value of this resistor, the more accuracy that is obtained. As a general rule it should be, at minimum, at least a couple of orders of magnitude larger than any surrounding resistor, and preferably larger. The second method is to use supermesh. A supermesh is a larger mesh loop than contains other mesh loops inside of it.

Consider the circuit shown in Figure 7.3.8 . In the center we have a current source, \(I_s\), which lacks an associated internal resistance. Two traditional mesh loops, \(I_1\) and \(I_2\), are labeled as usual. The problem here is that we cannot use an Ohm's law based \(IR\) voltage drop for \(V_b\). We have no way to express this as the voltage across \(I_s\) is an unknown. On the other hand, what we do know is that \(I_s\) must equal the combination of the traditional mesh currents \(I_1\) and \(I_2\). That is, from the perspective of the first loop, \(I_s = I_1 − I_2\). Remember, one or both of the mesh currents could be negative, and thus rotating counterclockwise.

We now perform a KVL summation around the supermesh loop, similar to what we have done previously. The difference this time is that we need to recognize that components each see one of the original mesh currents; namely \(I_1\) or \(I_2\) in this case. We do not solve for a supermesh current, we simply use the supermesh to define the loop for the KVL summation. The summation follows:

The voltage drops across the resistors can be expanded using Ohm's law, using the original mesh current associated with each resistor.

We now have two equations with two unknowns and can solve for \(I_1\) and \(I_2\). This procedure is illustrated in the following example.

Next, we'll perform a KVL summation around the supermesh loop.

By inspection we know

We can substitute this expression into the prior supermesh expression and solve for I1:

As a crosscheck, we could also add the voltage across the 8 \( \Omega \) resistor to the 12 volt source:

Comparison of Nodal and Mesh

Compared to nodal analysis, mesh analysis has the advantage of dealing with resistances rather than conductances when writing the system of equations. Further, the mesh inspection method works with voltage sources which tends to be convenient for many circuits, while the nodal inspection method requires current sources. On the down side, the resulting set of mesh currents requires further processing in order to find either branch currents or node voltages, while nodal analysis produces node voltages directly with no further processing. Mesh also has the disadvantage of being limited to planar circuits while there are no such limits to nodal.