Eutrophication occurs when excess nutrients are introduced into a body of water. This process increases the rate of supply of organic matter in an ecosystem and stimulates aquatic plant growth. At normal levels, these nutrients feed the growth of organisms called cyanobacteria or algae. But with too many nutrients, cyanobacteria grow out of control. Excess algae block the sunlight needed by bottom-dwelling plants and lead to a decrease in oxygen in the water and consequently leads to negative outcomes.

Eutrophication occurs naturally but anthropogenic activities such as industrial effluent and runoff of fertilizers rich in nitrogen and phosphorus contribute heavily to eutrophication events. When supplied with an excess of nutrients, the algae can grow out of control. This event is known as an “algal bloom,” and disrupts the balance of the ecosystem. As described above, the increased growth blocks the availability of sunlight to benthic organisms and other plants and organisms in the photic zone. The overgrowth of algae eventually begins to die off and is broken down by microbes that consume oxygen during the decomposition process. This creates a hypoxic environment and decreases oxygen availability in the water to other organisms.

This video by NOAA explains Eutrophication

Some of the negative effects of this excessive algae production, or algal blooms, are: 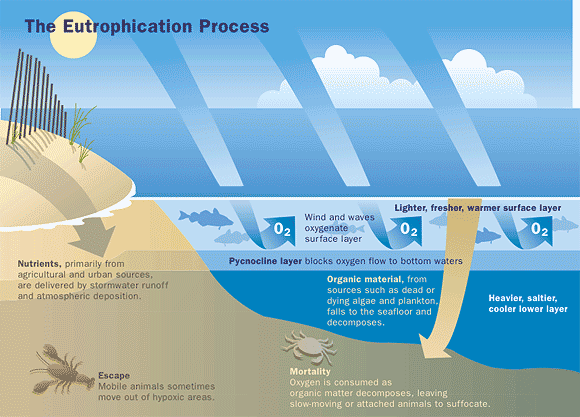 The following link directs you to a video made by Khan Academy that explains the process of eutrophication and how dead zones are formed.

A point source pollution is one that is directly identifiable and can be traced back to a singular distinguishable source. Factories and sewage treatment plants are the most common types of point sources that cause eutrophication. Some factories discharge their waste, called effluent, directly into a water body from sewage pipes. Unregulated discharge of effluent can cause severe damage to human health and the environment. The consequences of unregulated discharge include water pollution, unsafe drinking water, and restricted recreational activities. The sewage dump can deposit nutrients in streams that can be carried out to sea and cause eutrophication events. Symptoms caused by exposure to algal toxins in drinking water can include nausea, vomiting, and throat irritation. When water is consumed in sufficient quantities, the toxins can affect the liver and nervous system. This can also indirectly affect the economy because of the loss of working days due to such health problems.

As plant and animal biomass increase, species diversity decreases and the affected area will become overpopulated by phytoplankton feeding off the increased algae. This will also change the dominant biota in the region.

Turbidity is the clouding of water due to sediment. It can be caused by excessive phytoplankton, algae growth, urban runoff, or sediments from erosion. These suspended particles, in addition to making the water look dirty, also help promote the toxins in water as heavy metals and toxic organic compounds can attach easily to the suspended sediment. These suspended particles also absorb heat from the sun, making turbid waters warmer. This also reduces the oxygen content in the water, as more oxygen is dissolved in colder waters. The suspended particles also scatter light, decreasing the photosynthetic activity of plants and algae, which results in a positive feedback loop for decreasing oxygen even more. Some biological impacts include: fish eggs and larvae will be covered and suffocated, and gills will become clogged and damaged. Thus, turbidity is a plausible and extremely harmful effect of eutrophication.

The Black Sea is one of the many dead zones that have been identified. The dead zone resulted from the contaminants from the Danube River which courses from Germany. During the 1960s to 1989, huge input to watersheds from several sources occurred. The nutrient sources are rising fossil fuel use and NOx input from atmospheric sources, intensive fertilizer use in farming practices, sewage input to water systems. This resulted in the loss of fisheries and marine habits disrupted and reduced tourism.

The Gulf of Mexico is essentially a large drain for the network of rivers known as the Mississippi-Atchafalaya River Basin (MARB), which includes major rivers such as the Mississippi and Missouri. MARB passes through 31 states, and agriculture is the dominant industry in several of those states, which is where the overflow of nutrients originates. The eutrophication process in the Gulf of Mexico is cyclical and grows in the summer and shrinks during the winter due to decreased agriculture only to return the following summer. This dead zone along the northern edge of the Gulf stretching along Texas and Louisiana measured 13,080 square kilometers in the summer of 2014, and it is the largest dead zone in the United States 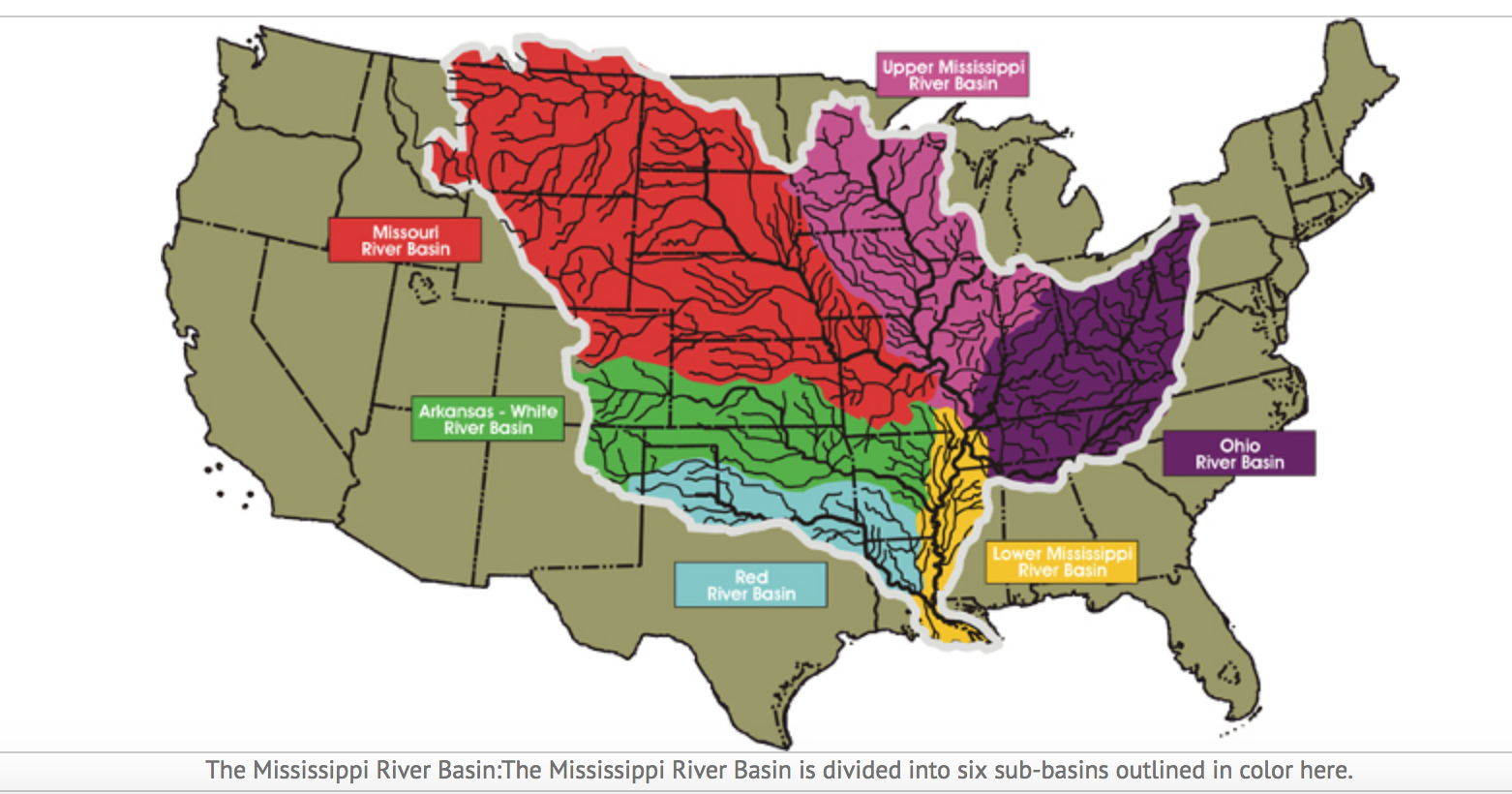 This following video gives a short summary of the 2017 Gulf of Mexico Hypoxic Zone. https://oceantoday.noaa.gov/happnowdeadzone/ 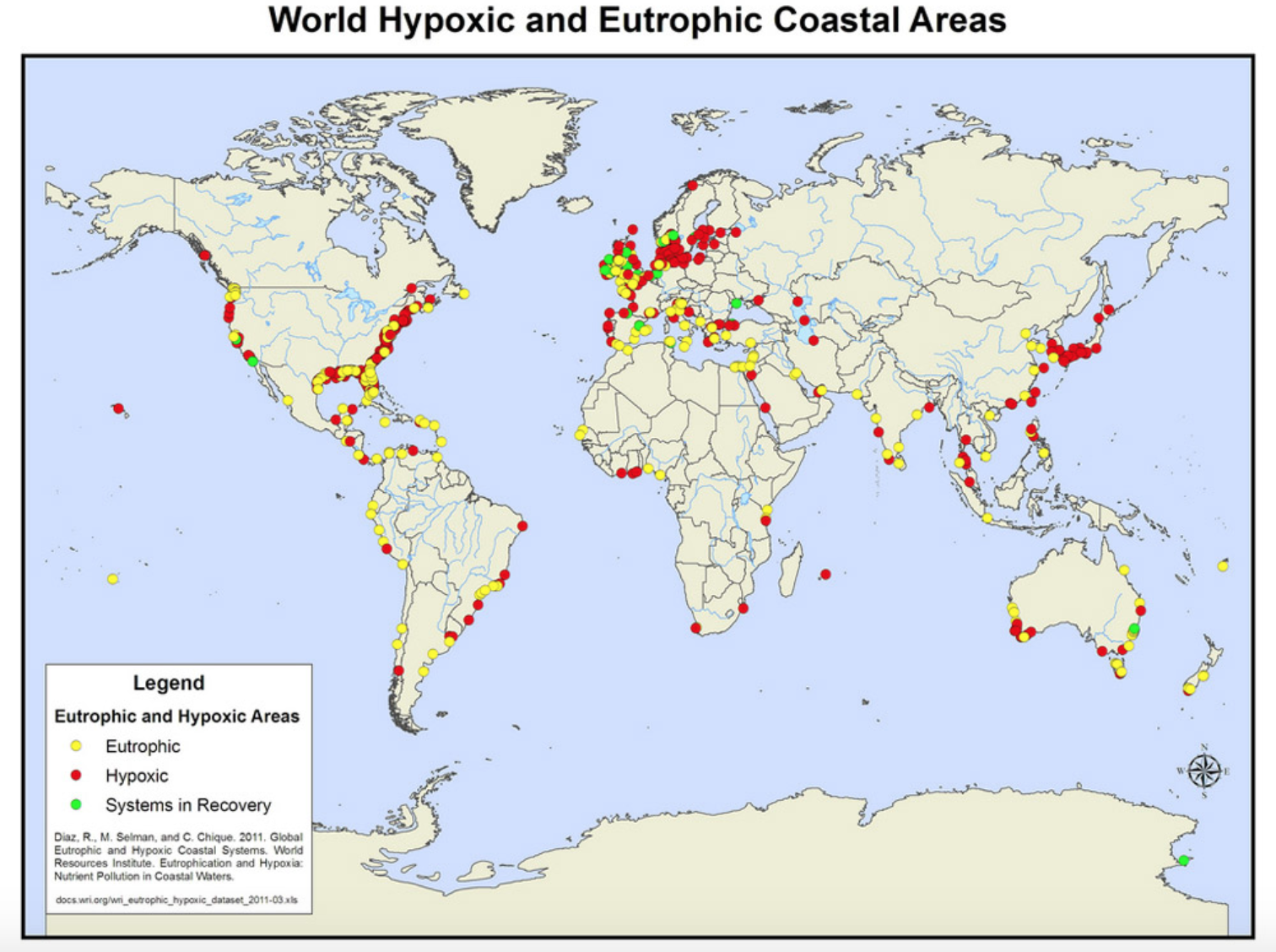 The following image shows current areas around the globe that are hypoxic, eutrophic, or in recovery. This map shows dead zones (red) areas where excess nutrients might allow dead zones to develop (yellow). In some parts of the world, areas that had dead zones are getting better (green).