As we saw in the previous section, coastal upwelling off of Peru makes that region one of the world’s most productive fishing grounds. But every so often, the conditions in the region are very different. Every few years, the cold, nutrient-rich water is replaced by unusually warm water that is low in nutrients, leading to a decline in fish populations. In addition, the normally dry areas receive lots of rain. Because this phenomenon occurs in the northern winter close to Christmas, it is called El Niño (the child). More formally, the event is referred to as El Niño-Southern Oscillation (ENSO). The Southern Oscillation portion refers to the fluctuating atmospheric conditions that lead to the localized ocean warming of El Niño. While the exact reasons for the oscillation events are unclear, it is easier to understand how they lead to an El Niño.

Under normal conditions in the equatorial Pacific, the trade winds blow towards the west, moving large amounts of warm surface water towards the western Pacific around Southeast Asia. As the surface water moves west, it is replaced by cold, nutrient-rich deep water through upwelling (Figure \(\PageIndex{1}\)). The coastal upwelling leads to a shallow thermocline in the eastern Pacific. In terms of atmospheric conditions, the trade winds are part of a convection cell called the Walker Cell. There is low pressure over the western Pacific, leading to rising moist air and significant precipitation in the region. In the eastern Pacific near South America, there is high pressure, leading to drier conditions (Figure \(\PageIndex{1}\)). Figure \(\PageIndex{1}\) Normal conditions in the equatorial Pacific. Low pressure in the western Pacific and high pressure in the eastern Pacific cause the trade winds to move surface water to the west, leading to upwelling and a shallow thermocline near South America (Modified by PW from Fred the Oyster (Own work) [Public domain], via Wikimedia Commons).

During an El Niño-Southern Oscillation, the high pressure system over the eastern Pacific diminishes, so the trade winds are weakened, or in extreme cases will even reverse. When this happens, warm surface water begins to flow east across the Pacific towards South America (Figure \(\PageIndex{2}\)), warming the coastal South American water by up to 8o C in strong ENSO years. This influx of low density warm water deepens the thermocline and prevents upwelling, which dramatically reduces productivity and can devastate populations of fish and other marine life. 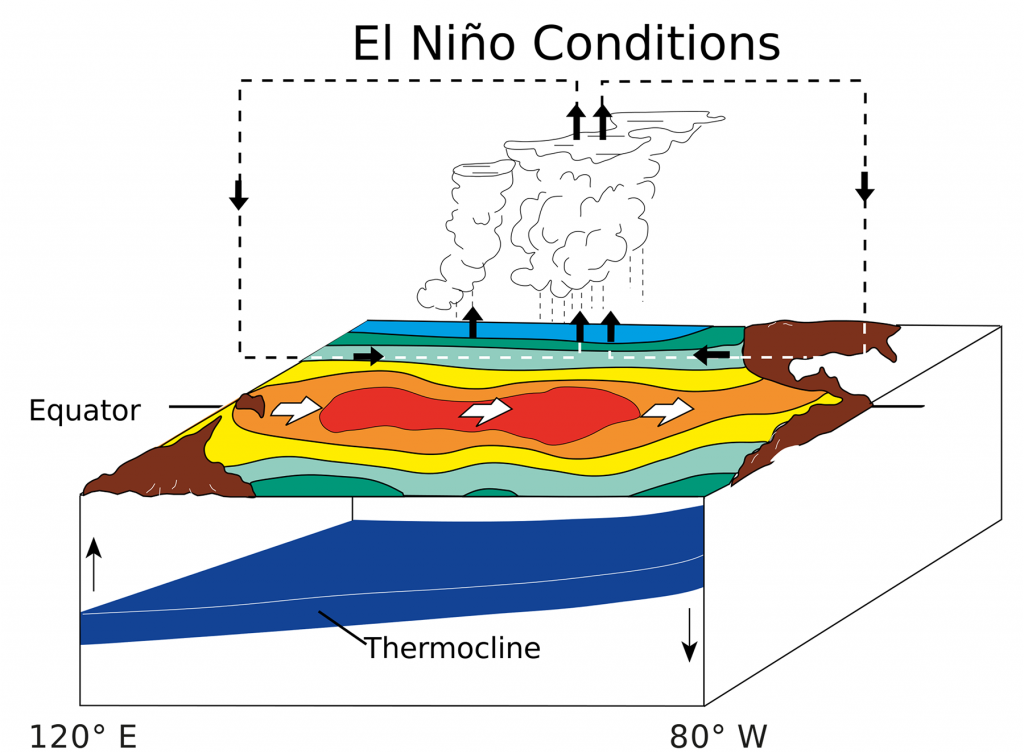 In the atmosphere, the low pressure system in the western Pacific is replaced by high pressure, bringing dry or even drought conditions to Southeast Asia and Australia. The low pressure system moves east across the Pacific, potentially reaching as far as South America in strong El Niño years. The low pressure over the eastern Pacific brings lots of rain and flooding to South America (Figure \(\PageIndex{2}\)). But the effects of El Niño are not just limited to the Pacific; it can influence weather patterns throughout the globe (see box below).

Because the Southern Oscillation is a cyclic pattern, the eastern Pacific is not subject just to unusually warm conditions. There are also periods of abnormally cold water in the region known as La Niña events. During a La Niña the trade winds are unusually strong, leading to increased upwelling and transport of deep, cold water to the surface (Figure \(\PageIndex{3}\)). The effects of a La Niña are essentially the opposite of an El Niño, bringing cooler and wetter conditions to the northwestern United States and Canada, while the southeastern US receives below-average precipitation. Monsoon seasons in Asia are drier during El Niños but wetter during La Niña events. El Niño and La Niña events alternate, although the presence of one does not always mean the other will automatically follow. El Niños occur roughly every 2-7 years, and each event may last from a few months to a year or more. Although we do not understand exactly why or when the ENSO events will occur, we can anticipate their arrival by monitoring a number of ocean and atmospheric phenomena that make up the Multivariate ENSO Index (MEI). Examination of the MEI over time demonstrates the cyclic nature of ENSO events (Figure \(\PageIndex{4}\)).

Figure \(\PageIndex{4}\) Multivariate ENSO Index over time. Positive (red) values indicate warmer than normal conditions, while negative (blue) values represent conditions that are cooler than average. The greater the deviation from zero, the stronger the event. Note the intense El Niños in 1983, 1997-1998, and 2015 (NOAA, https://www.esrl.noaa.gov/psd/enso/mei/).

The 2014-2016 El Niño was one of the strongest ENSO events on record (Figure \(\PageIndex{4}\)). Some of the recorded global impacts of this El Niño included: