This topic has been debated for years and even more so now with the new United States president. This topic has sparked a great debate among caring citizens, politicians, and news outlets on whether or not global warming is real or a hoax. However, scientists all over the world have scoured over all relevant data and facts and harmoniously agree the planet is indeed warming.

Many might ask, “well what exactly is global warming?”. Global warming is the term used to describe a gradual increase in the average temperature of the Earth’s atmosphere and its oceans; a change that is believed to be permanently changing the Earth’s climate.

There are cold hard facts that prove climate change is prevalent.  The EPA has over forty data contributors from different government agencies that provide indicators of the cause and effects of climate change. These indicators effect the oceans in detrimental ways like thermal stress, (“stress in a body or structure due to inequalities of temperature”), and the warming of the oceans.

The greenhouse effect is the result of greenhouse gases trapping heat in the Earth’s atmosphere radiating from earth toward space, resulting in the warming of the oceans and melting glaciers. When the glaciers melt, it increases the sea level which adds to the ocean that is already expanding.

Examples of greenhouse gases are: carbon dioxide (CO2), methane (CH4), nitrous oxide (N2O), and water vapor (H2O). From 1990-2010 gas emissions caused by humans have increased by 35%. Electricity generation is the worlds largest contributer of emissions followed by transportation. Climate forcing, which is a change in the earth’s energy balance that results in a warming or a cooling effect on the climate. Over the past several years we have also steadily increased our use of fossil fuels, which has ultimately produced 5x more carbon dioxide emissions.The graph below shows how our use of fossil fuel emissions has skyrocketed in the last decade. 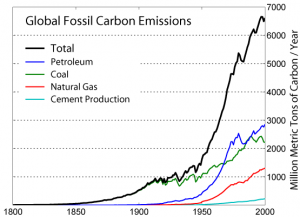 How is the warming ocean impacting the marine life?

One of the most vulnerable organisms to global warming is coral. Higher temperatures cause coral bleaching, which results in disease, lack of nutrients and even death of the coral. The zooxanthellae’s enzyme systems are effected from rising temperatures which makes it hard to protect the coral from toxicity. Even an increase of 1-2 degrees Celsius can cause bleaching. Coral Bleaching occurs when corals experience stress such as temperature change. This harms corals because they have a limited temperature range in which they can live. When water is above the corals ideal temperature, the coral expels the symbiotic algae that reside in its tissue and provide it with nutrients. This turns the reefs a ghostly white (thus the term ‘bleached’), and, while the coral is not exactly dead at that point, it is more susceptible to diseases which lead to death. 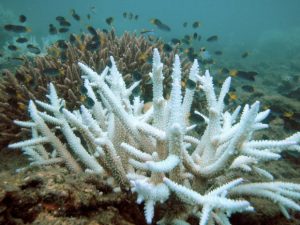 As humans burn fossil fuels and release carbon dioxide, those gases enter the atmosphere where they cause an increase in global temperature. However, did you know that not all of the carbon dioxide ends up in the atmosphere? In fact, about 40% is said to get absorbed by the ocean waters. The amount of carbon dioxide that the ocean can hold is dependent upon the temperature of the ocean. For example, colder water can absorb more carbon where warmer water absorbs less. Today, scientists believe that as the oceans warm they will become less and less capable of taking up and absorbing carbon dioxide. As a result, more of our carbon pollution will stay in the atmosphere and therefore further the contribution to global warming. For now, the oceans are considered our saviors by absorbing large amounts of our carbon pollution. This buys us some time to reduce our use of fossil fuels. However, there is always a consequence. The increased carbon uptake by the ocean means that the ocean waters will become acidic more rapidly than they otherwise would. This acidification threatens many components of the food chain.

When the ocean temperature increases, this can cause a bottleneck in the food chain, which can result in an interruption in the marine food web. The higher the temperature, the higher the growth of zooplankton. Zooplankton reproduce faster than the phytoplankton and end up eating all of the plankton in an area. This can have a drastic effect on any organism that feeds off of them.

Rising sea levels are a result of the ocean expanding from warming. When the sea levels rise, they interrupt ecosystems and habitats of thousands of organisms such as sea turtles and seals. A rise in sea level results in coastal flooding, which has increased in the United States on coastlines such as the Carolina’s, New Jersey, and Maryland. Floods are now 10 times more likely to happen than they were years ago. These floods are endangering species and ruining coastline habitats.