Although this class will be focusing on Windows 10 and 7, the things you will learn in this module can be done by any version of Windows or macOS. If you are not running Windows 10 or 7, you can find directions online by searching for the task you are trying to do and the name of your operating system. (For example, you might search for “create folder windows vista.”)

To identify your operating system, start by narrowing down which brand of OS you have. Often you can determine whether you are running Windows or macOS without even turning on your computer:

If the answer to any of those questions is yes, then you most likely have a computer that runs macOS.

If you have determined that you are running Windows, there are many methods to determine your specific operating system, not all of which are listed here. It doesn’t matter which method you use; what’s important is figuring out which operating system you have. If one method doesn’t work, try another.

Press the Windows key (at the bottom of the keyboard, looks like four squares) and R key at the same time to open the Run dialog box. Type in “winver.” Click OK. A window should open called About Windows that tells you which operating system you are using. This computer is using Windows 10. This computer is running Windows 10 Home Version 1607 with a 64-bit operating system.

Open the Start menu by clicking the bottom left-hand corner of your screen. Right-click on Computer, then select Properties. 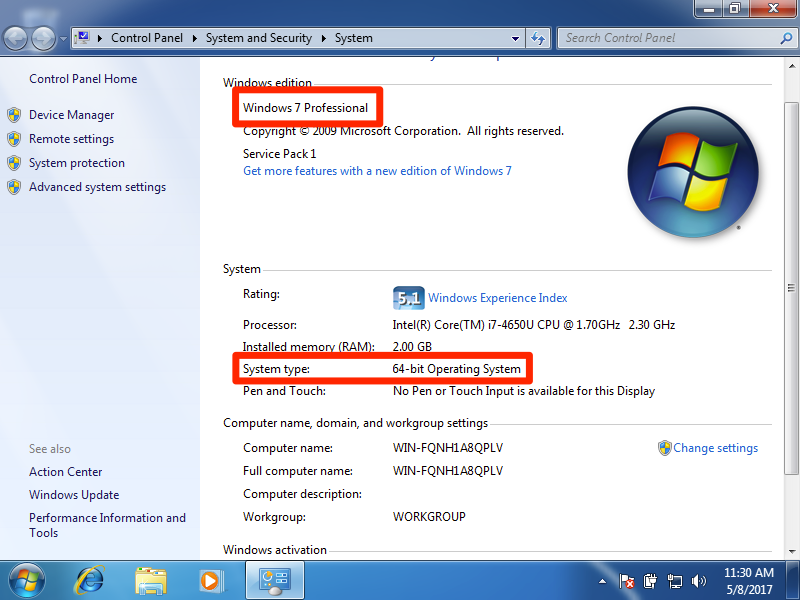 This computer is running Windows 7 Professional with a 64-bit operating system. This computer is running Windows 7 Professional with a 64-bit operating system.

Methods 2–4 also provide additional information on your computer that is useful for troubleshooting and determining what programs you will be able to run. For example, many software programs have a version for a x32-based processor and another for a x64-based processor. For the purposes of this course, you only need to know which edition of Windows you have.

Over the past few years, Microsoft and Apple have traded barbs with each other, each claiming to have a better operating system and software. While Microsoft has always had the larger market share (see sidebar), Apple has been the favorite of artists, musicians, and the technology elite. Apple also provides a lot of computers to elementary schools, thus gaining a following among the younger generation.

Sidebar: Why Is Microsoft Software So Dominant in the Business World?

If you’ve worked in the world of business, you may have noticed that almost all of the computers run a version of Microsoft’s Windows operating system. Why is this? On almost all college campuses, you see a preponderance of Apple Macintosh laptops. In elementary schools, Apple reigns as well. Why has this not extended into the business world?

Almost all businesses used IBM mainframe computers back in the 1960s and 1970s. These same businesses shied away from personal computers until IBM released the PC in 1981. When executives had to make a decision about purchasing personal computers for their employees, they would choose the safe route and purchase IBM. The saying then was: “No one ever got fired for buying IBM.” So over the next decade, companies bought IBM personal computers (or those compatible with them), which ran an operating system called DOS. DOS was created by Microsoft, so when Microsoft released Windows as the next iteration of DOS, companies took the safe route and started purchasing Windows.

Microsoft soon found itself with the dominant personal-computer operating system for businesses. As the networked personal computer began to replace the mainframe computer as the primary way of computing inside businesses, it became essential for Microsoft to give businesses the ability to administer and secure their networks. Microsoft developed business-level server products to go along with their personal computer products, thereby providing a complete business solution. And so now, the saying goes: “No one ever got fired for buying Microsoft.”

The software gives the instructions that tell the hardware what to do. There are two basic categories of software: operating systems and applications. Operating systems provide access to the computer hardware and make system resources available. Application software is designed to meet a specific goal. Productivity software is a subset of application software that provides basic business functionality to a personal computer: word processing, spreadsheets, and presentations. An ERP system is a software application with a centralized database that is implemented across the entire organization. Cloud computing is a method of software delivery that runs on any computer that has a web browser and access to the Internet. Software is developed through a process called programming, in which a programmer uses a programming language to put together the logic needed to create the program. While most software is developed using a closed-source model, the open-source movement is gaining more support today.