Each type of magnetism differs from the others because of differences in the composition and crystal structures of the materials, and how electrons within these materials respond to a magnetic field.

Unlike ferromagnetic materials, which are typically metals, ferrimagnetic materials are ceramics, in particular, ceramic oxides. The most widely used ferrimagnets in technological devices are materials known as ferrites. Ferrites are electrically insulating transitional-metal oxides with the general chemical formula MO·Fe2·O3, where M is a divalent ion such as Mn2+, Fe2+, Co2+, or Ni2+.

Ferrites are often prepared by standard ceramic processing techniques. In the case of NiO.Fe2·O3 powders of NiO and Fe2O3 are mixed together and pressed into the desired shape before sintering (firing) at high temperature to form a dense ceramic of the desired composition. This method provides a reliable way of forming a wide variety of shapes and sizes of ferrimagnetic materials for embedding into technological devices.

The figure below shows the ordering of magnetic ions in a ferrimagnetic lattice, with arrows pointing down being longer than those pointing up to indicate the relative size of the spin-up and spin-down moments. The result is a net magnetic moment in the down spin direction. The antiparallel magnetic moments in both ferrimagnetic and antiferromagnetic materials can be explained by the superexchange behavior that occurs in oxide materials. Using manganese oxide, MnO, as an example, in its crystal oxygen ions, O2-, sit between manganese ions, Mn2+, as shown schematically in the figure below. Due to the different energy levels of the Mn and O orbitals, in order for bonding between the two ions to occur, the spin direction of one electron in Mn2+ is flipped to match that of the electron in the oxygen ion, thus forcing magnetic moments on either side of the molecule to be antiparallel to each other.

Figure 2: Initial transition of superexchange behavior in MnO where the magnetic moment of one electron of the left-side Mn3+ is flipped due to the down-spin of the electron in the leftmost orbital of the O2- ion to which it bonds.

Figure 3: The result of superexchange behavior whereby all electrons of the left-side Mn3+ are rotated to be antiparallel to the right-side Mn3+, so that both match the spins of the bonding orbitals of the O2- ion.

The spontaneous magnetization of ferrimagnetic materials originates from the non-zero net magnetic moments when filling up the d orbitals of transition metal ions according to Hund’s Rule. In the case of ferrites, which have what is known as an inverse spinel structure, the crystal structure can be thought of as consisting of two sublattices. Ions on sublattice A are tetrahedrally coordinated to neighboring oxide ions, while those on sublattice B are octahedrally coordinated (figure 4). Ions on each sublattice have their spins aligned in the same direction as one another. The magnetic moments of Fe3+ ions cancel each other out because there is the same number of ions on the A and B sublattices, but with their moments aligned in opposite directions.

In order for there to be magnetization in the material, the numbers of magnetic ions on each of the sublattices have to be different, so that not all magnetic moments are canceled out. Specifically, in order to create features of ferrimagnetism from A Site and B Site, interactions involving both sublattices must be considered: A-A, B-B, and A-B site interactions. Since A sites and B sites in the inverse spinel structure have different environments, the magnetization and the Weiss molecular fields are also not identical in magnitude. The total magnetization of the crystal can be expressed as the sum of magnetization on the A and B sublattices:

Here n is the number of magnetic ions per unit volume, α is the faction of A ions, beta is the fraction of B ions, and µA and µB are the average magnetic moment of an A ion and B ion, respectively, in the direction of the field at temperature T.

where γ is the molecular field constant, which can be calculated using the Curie temperature Tc, magnetic moment µm, magnetization of each sublattice M, permeability of free space µ0, and the Boltzmann's constant kB: An example of ferrimagnetic material is nickel ferrite, NiO·Fe2O3. The Fe3+ ions are evenly distributed across both A and B sublattices, and thus their magnetic moments cancel out, while Ni2+ ions sit on B sites only. The electron configuration of nickel is 3d84s2 (Figure 5), from which two electrons are taken from 4s2 to form Ni2+, giving an electron configuration of 3d8. The electron spins of the ion are arranged according to Hund’s Rule. First, all five states are filled with one spin-up electron, leaving three electrons with down spin to be added. Adding these electrons in accordance to Hund’s rule results in two unpaired spin-up electrons. These two unpaired electrons produce a net magnetic moment on Ni2+ ions; since these all sit on the same sublattice they are parallel and produce a net magnetic moment in the crystal.

The arrangement of magnetic moments in the inverse spinel structure of a ferrite can be summarized as shown in Figure 6, metal cations on A site all have up-spin magnetic moments, and those on B sites all have down-spin moments. Five of the upwards pointing arrows are canceled by an arrow pointing down, leaving two remaining up arrows corresponding to a net magnetic moment of two. 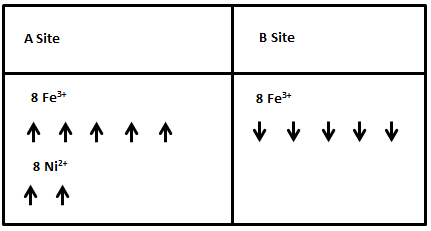