Magnetic memory is the main way how data is being stored on magnetic medium. It is how data is stored on devices like hard drive which is the device people use to store documents audios and videos in their computers. Because of this way of memorization, hard drive has a lot of advantage over optical medias like CD and DVD for its longer life span, larger capacity and ability of rewriting. The idea behind this method of memorization is that by having multiple regions on a platter, the different magnetization on the region represent different signals which are further translated into data that users can understand.

Design of a hard drive

The most important component of a hard drive is its platter because that is where data is stored. The platter is in a circular shape and made in non-magnetic materials like aluminum because it electron alignment does not get affected by magnetic field at all, thus, most magnetization occurs on its surface, which is coated with a magnetic material. In order to obtain the best performance out of a hard drive, both sides of the platter are coated and are utilized in the memorization process. The magnetic coating on the surface is separated into different regions by using barriers (what is used as barriers, and why) between them in order to prevent interference between magnetic fields, those regions are refer to as bits. A metal head is used for each side of the platter in order to read and write data from the bits. 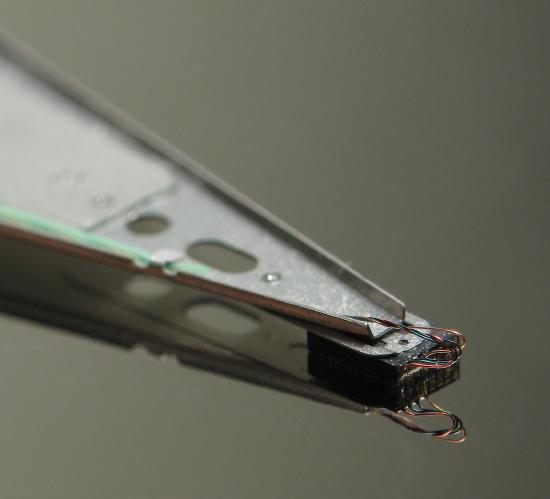 After the writing process, regions where data are stored will have bits that have been affected by the coil’s magnetic field and regions where no data is stored will be magnetic-free. The idea behind the reading process is bits that shows a certain direction of magnetic polarity will represent 1 and the other direction will represent 0. By placing the coil close to a magnetic field, the electrons within the conductor, in this case the coil will start to flow, creating an electron current flowing through the coil. Since different direction of magnetic field will cause electrons to flow in different direction. The two different voltages caused by the different directions of current will be interpreted by the computer as digital signal and will then be translate into the language that most people can understand.

The future development of hard drive lays in two main categories, more capacity and faster read/write speed. In almost 60 years of development, hard disk drives have developed from being as large as two refrigerators and can only hold 5 megabytes of data to the hard disk drive we have today that can easily hold 1 terabyte of data and does not take up much space. The price of the first hard disk drive made by IBM was priced as 10000 US dollars per megabytes back in 1956, considering the currency inflation, that is more than 80000 US dollars today, if that price remains the same, it will cost more than 80 trillion US dollars to purchase a 1 terabytes hard disk drive! Because of the design of HDD, the read/write head cannot touch the surface of the platter, however, as the distance between head and surface decreases, the area being scanned will decrease as well, allowing more data to be stored on the same amount of area; by improving the smoothness of the platter, the rotation speed can be improved and eventually lead to a faster read and write speed. Nowadays people have more selection in terms of data storage then before, one of them being the solid state drive, which utilized integrate circuit to memorize instead of magnetic memory resulting in a faster read and write speed; however, solid state drive is still rather expensive and has way less capacity than traditional HDD, making HDD still the best choice for mainstream customers. Figure 5, a look of the Intel solid state drive