According to the band theory, semiconductors will actually act as insulators at absolute zero. Above this temperature and yet still staying below the melting point of the solid, the metal would act as a semiconductor.Semiconductors are classified by the fully occupied valence band and unoccupied conduction band. With the small band gap in between these two bands, it takes a certain amount of energy to excite the electrons from the valence to conduction band. Thus it follows that the higher the temperature, the more conductive the solid will be (Figure 1).

As stated previously, continuous bands of energy are formed due to the combinations of molecular orbitals close in energy. Of course, due to the mass amounts of different molecular orbital mixings, bands of varying energy will form. The difference between these band energies is known as the band gap, as indicated in Figure 2. 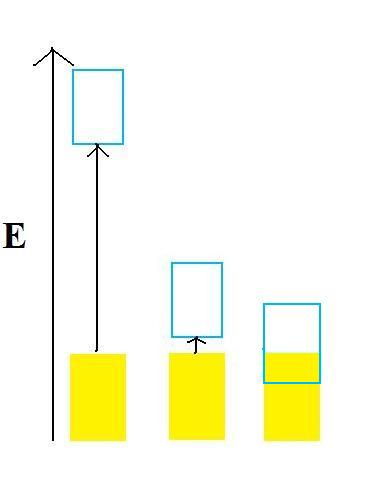 The band of energy where all of the valence electrons reside and are involved in the highest energy molecular orbital.

This level refers to the highest occupied molecular orbital at absolute zero. It is usually found at the center between the valence and conduction bands. The particles in this state each have their own quantum states and generally do not interact with each other. When the temperature begins to rise above absolute zero, these particles will begin to occupy states above the Fermi level and states below the Fermi level become unoccupied.

Semiconductors are defined to have conductivity in between an insulator and a conductor. Due to this property, semiconductors are very common in every day electronics since they likely will not short circuit like a conductor. They get their characteristic conductivity from their small band gap. Having a band gap prevents short circuits since the electrons aren't continuously in the conduction band. A small band gap allows for the solid to have a strong enough flow of electrons from the valence to conduction bands in order to have some conductivity.

Electrons in the conduction band become free from the nuclear charge of the atom and thus can move freely around the band. Thus, this free-moving electron is known as a negative charge carrier since having the electron in this band causes electrical conductivity of the solid. When the electron leaves the valence band, the state then becomes a positive charge carrier, or a hole.