Ferroelectricity is a property observed in certain materials characterized by the presence of a spontaneous electric polarization without the presence of an electric field, much like how ferromagnetism is characterized by a spontaneous, permanent magnetic field. A subclass of piezoelectric and pyroelectric materials, ferroelectric materials are noncentrosymmetric crystals, where some atoms in the unit cell are misplaced to create a permanent electric dipole due to the imbalances observed in the distribution of electric charge. Barium titanate (BaTiO3), a common ferroelectric material with the perovskite crystal structure, portrays this property by displacing the titanium ion at body center 0.05Å along the +b direction and the oxygen atoms 0.08Å in the -b direction, creating a slight dipole moment (figure 1). This displacement, coupled with the relatively small size of the Ti4+ ion, makes it difficult for the titanium ion to bond with all of the oxygen ions. 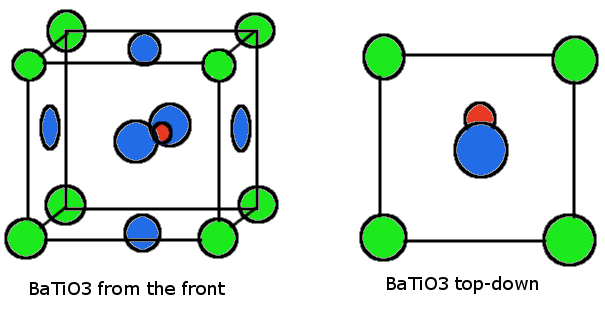 Ferroelectricity is a displacive phenomenon where ions within the unit cell are placed asymmetrically, creating dipole moments. These asymmetries may form in two different ways, either displacively or by order-disorder. Ferroelectrics with the perovskite crystal structure, like barium titanate (BaTiO3) and lead titanate (PbTiO3), are commonly displacive-type ferroelectrics, where at temperatures below the Curie temperature, ions are displaced slightly from equilibrium to create an asymmetry in the electron population densities, which leads to the permanent dipole moment. In order-disorder ferroelectrics, like NaNO3, the dipoles are present at all temperatures, but are randomly oriented above the Curie temperature. The dipoles align after the temperature is brought below the threshold. Figure 2a & 2b: Representations of the polar axes of a ferromagnetic material before (left) and after (right) heat treatment under an applied field.

While the individual unit cells of a ferroelectric material possess their own dipole moment, without the presence of an external electric field these moments do not align with each other to produce any long-range symmetry (figure 2a). Within individual grains the polar axes are aligned but across the bulk of the sample there is no net polarization. At sufficiently high temperatures for the grains to break down, and in the presence of an electric field, the polar axes may realign to match the field. If the material is cooled under this field, the polar axes remain aligned, thus forming a substance that has an observable, spontaneous electric dipole (figure 2b). In the case of barium titanate, the titanium ion is displaced in the direction of the electric field and the oxygen ions displaced against it, creating the dipole. With subsequent inputs of alternating electric fields, the dipoles realign by shifting the titanium ion to the other side of the unit cell.

Ferroelectricity is characterized by the presence of a spontaneous electric dipole while not exposed to an external electric field, much like how ferromagnetism is characterized by a spontaneous magnetic dipole. Above a certain temperature, called the Curie temperature (TCurie), ferroelectric materials lose this polarization and behave like paramagnetic or diamagnetic materials. At the Curie temperature, the energy within the crystal allows the ions to arrange themselves in a stable equilibrium, eliminating the polarization caused by the displacement of one or more ions. Many application of ferroelectric materials utilize the polarization reversal, or switching effect, that the materials experience when exposed to powerful electric fields. This switching effect is utilized in digital memory applications, as reversing the polarity of the material allows for the creation of 0 and 1 bits in computing. As the polarization of ferroelectrics is nonvolatile and does not require extra input to remain polarized, ferroelectrics possess an advantage over traditional semiconductors when it comes to digital storage. Dielectric random access memory (DRAM) in a computer relies on electricity to maintain its storage, and unexpected shutdowns or power outages cause loss of information, allowing the short-term memory modules in computer to behave like back-up long-term memory banks. This property also makes ferroelectrics ideal for electronic access cards, like keycards or transit cards, as their polarized states are not disrupted by magnetic fields and do not decay over time. The ability to maintain its polarization without outside input also means ferroelectric random access memory (FeRAM) only requires energy when it is read or written, while DRAM requires a constant energy input to maintain the information stored. The energy-saving possibilities of FeRAM are therefor highly researched and a leading reason for the development of more efficient FeRAM assemblies.