Solar cells are one of the biggest sustainable methods of energy and have the ability to convert radiated light into electricity. This article provides an overview of what a solar cell (or also known as photovoltaic is (PV), inorganic solar cells (ISC), or photodiode), the different layers included within a module, how light is converted into electricity, the general production of inorganic solar cells, and what ideal materials (typically semiconductors) are used for it.

The function of a solar cell, as shown in Figure 1, is to convert radiated light from the sun into electricity. Another commonly used name is photovoltaic (PV) derived from the Greek words “phos“ and “volt” meaning light and electrical voltage respectively [1]. In 1953, the first person to produce a silicon solar cell was a Bell Laboratories physicist by the name of Gerald Pearson [2]. His discovery was then refined by two other Bell researchers, Daryl Chapin and Calvin Fuller, by making the solar cell capable of converting enough energy from the sun and applying it to electrical equipment.

The Sun provides Earth about 107W of energy. In other words, the Sun can provide the present entire human population’s energy requirements for an entire year with only one hour. However, the Sun’s power density, or solar constant, is reduced by 30% when passing through the Earth’s atmosphere, on a clear day at sea level, giving an insolation at the Earth’s surface at about 1000 Wm2. [3] Solar cells and the sun are regarded as the most sustainable alternative solutions to current energy and resource problems in terms of electricity today. Impacts on the Earth from the use of solar cells and the sun’s energy include preserving natural resources, reducing the amount of energy needed to be consumed, not emitting any greenhouse gases, and knowing that it’s reliable. Not only do solar cells have a positive impact on the Earth, but it has great indirect and direct effects on public health, human development, reduction of rural depopulation, and generates economic activity. [4] 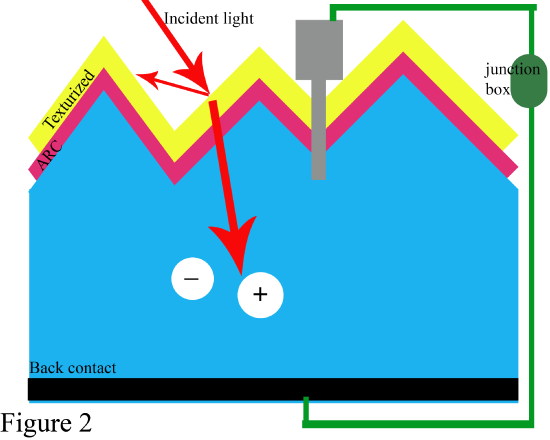 The top layers of a solar cell typically involve the top tempered top glass, framing, anti-reflective coating, and texturization. Depending on the process and purpose of the solar cells, some may have more layers (such as multi-layered cells) while some are minimal. The following layers that are included in this section give a general description of their purpose, layout, and how light is affected when traveling through it.

The outermost transparent and resistant layer of material, typically a sheet of ‘high-transmission’ toughened glass, provides protection for the silicon since it cannot be directly exposed to air. Occasionally it’s used as a rear layer when used for car windscreens and such. Besides an EVA resin on both sides of the crystalline silicon cells, an additional toughened sheet of glass is laid on top; both the glass and EVA have an index of 1.5. The greater the difference in the index between one side of a surface and the other, the more light it reflect. Thus the index number of refraction is formulated in the reflection ratio as:

The middle layers, and sometimes repetitive layers, are mainly composed of crystalline material and encapsulations. However, depending on the purpose of the solar cell, it may contain other less commonly used layers as well. The following layers are only a generalized description of what it is, what materials are used, its purpose, and how light with be affected when traveling through them.

The most bottom layers are mainly composed of the rear metallic electrode, but can also include encapsulation and back covers.

The back contact, or rear metallic electrode, follows the crystalline pn-junction silicon region. Its purpose is to collect the minority carriers and produce an output current proportional to the intensity of the incident light.

When describing light, it’s important to keep in mind that the concept of wave-particle duality applies and therefore has waves of alternating electric and magnetic fields. The wave-particle duality is the ability for a particle to behave as both a particle and a wave. A photon is a quantified particle of light or of some other electromagnetic radiation that can carry energy, according to the formula of Louis de Broglie:

The electromagnetic spectrum consists of the entire range of light with varying wavelengths (λ) and frequencies (v) from radio waves with wavelengths greater than 1 meter to gamma rays less than 0.01 nanometers. Humans can only see the “visible” part, ranging from 400 nm to 800 nm, of the electromagnetic spectrum, where each corresponding color correlates with a specific wavelength. [4]

In solar cells, depending on the material and technology used, the efficiency when it comes to converting different color bands into electricity is dependent on its spectral sensitivity. Some cells will have a greater efficiency with longer wavelengths while others prefer smaller wavelengths as shown in Figure 3. This is due to the size of the material’s band gap which determines how much energy, or amount of photons, is needed in order to produce conductivity and hence electricity. The larger the band gap, the larger amount of energy is needed to conduct voltage. The voltage is created through the exchange of electrons and holes within a PN-junction. Therefore, the right amount of absorption of photons is necessary to produce the most efficient voltage. Hence, light that has energy less than the band gap will not absorb or contribute to the power output. On the other hand, light that has too much energy, or greater than the band gap, will quickly be lost via thermalization; created electron/hole pairs that lose their energy via phonons (heat) [7].

Besides the amount of energy, there are a couple other dependent measures to consider when optimizing a solar cell’s output voltage. Some other points to consider include temperature dependence, doping level of a device which influences its open circuit voltage, and the size of p- and n-type layers. With that said, the general steps of a solar cell’s operation start with light-generated carries, which then generates a current leading to a large voltage across the solar cell, and eventually dissipating the power into the load in in parasitic resistance [8].

The production of solar cells requires multiple methods and can result in various outcomes depending on them as well as the material used. The photovoltaic hierarchy describes the possible sets, or grouped up solar cells, that are possible to produce starting from single solar cells, to modules, to panels, and the largest of them all, an array of solar cells.

The first step in producing a silicon solar cell is to transform sand into pure silicon. Since pure silicon does not occur in nature, there is practically an endless supply of silicon dioxide in the form of sand found in 60% of the Earth’s crust. Semiconductor industries will purify this metallurgical-grade silicon until the impurity concentration is less than 0.1 ppma (parts per million atomic). This process starts with the chemical transformation of Si into a liquid compound followed by a technique called chemical vapor deposition (CVD) to obtain an ultrapure elemental silicon in solid form in the form of a thin silicon rod (typically around 0.5 cm). The rod is then broken into chunks and packaged, or also known as Siemens process. Once a company who wishes to make wafers, or thin sheets of crystalline silicon, they will obtain this package and use specific crystallization techniques in order manipulate its crystallographic structure, such as the Czochralski method, to acquire appropriate semiconductor properties.

Once a silicon wafer is obtained, the wafer will be subjected to several chemical, thermal and deposition treatments in order to transform it into a solar cell. A typical fabrication will include:

After testing the cells under standard conditions and sorting them into respective classes of current and voltages, the last step is to strategically place the solar cells into module sets. A typical module will have about 36 cells interconnected in series and encapsulated. Varied manufactured modules will differ in applications but all have the following components: front cover is tempered glass, the encapsulant is transparent and electrically insulating (ethylene vinyl acetate or EVA is widely used in this case), the solar cells and metal interconnect, and the back cover provides a barrier against humidity.