The metal-oxide (SiO2)-semiconductor (Si) is the most common microelectronic structures nowadays. The two terminals of MOS-Capacitor consist of the main structures in MOS devices and it is the simplest structure of MOS devices. Therefore, it's essential to understand the mechanisms and characteristics of how MOS-C operates. The mechanisms under static biasing conditions can be visualized from two diagrams.

The characteristics of MOS-C can be visualized by C-V (Capacitance verses Voltage) curves.

The band diagram shows the band energy of the materials and how their energy levels change in the process as functions of spatial dimensions. The X-axis represents the distance (x) in the cross-section view of the MOS devices. The Y-axis represents the energy. There are no arbitrary values for Y but only relative values. As the Y-axis is increasing, the corresponding energy is higher. In the figure 2 below is the energy band diagram of MOS-C in flat band with n-type semiconductor. The E vc is the vacuum level which is th minimum energy an electron must reach in order to free from the material. The work function ΦM and ΦS are the amount of work to remove an electron, so it's the difference between Fermi level (E F) and E vc . The electron affinity (X) specifies the height of energy barrier in semiconductors, so the X i is the energy barrier of the insulator (oxides SiO 2). The zero-bias band diagram in figure 2 (a) is called flat band diagram. The formation of this band diagram can conceptually think of the equilibrium metal-semiconductor contact but is separated with a distance x0, the thickness of the oxide layer.The Fermi level aligned between metal and semiconductor since it's specified in the property 8 above. Since there are no charge or electric field in the flat band MOS-C device, the inserted insulator can only have an effect in slightly lowering the energy barrier and there is no block charge diagram for flat band like figure in 2(b).

The block charge diagram shows the charge density distribution inside the MOS structure. Like the energy band diagram, the X-axis represents the distance (x) in the cross-section view. However, the Y-axis represents the exact charge distribution Q in the MOS devices. There are two horizontal Y-axis which represent the metal-oxides interface and oxide-semiconductor interfaces. The region above X-axis is the positive charge Q which is created by holes concentration, while the region below X-axis is the negative charge Q which is created by electrons concentration. Figure 2 (a) The flat band diagram of MOS-C in equilibrium with n-type semiconductor, (b) the block charge diagrams of flat band MOS-C.

Effect of an applied bias

Other than the flat band in the MOS structure, as the d.c bias VG apply to the MOS-C devices. Three different types of biasing regions with different shape of both energy band and corresponding block charge diagram occur and they are showed in figure 3, 4, 5 and 6 below for n-type semiconductors. However, the types of biasing regions are also different from n-type and p-type semiconductor because of the different positions of the Fermi level as well as the doped charges. Since the focus is the mechanisms under biasing conditions, the p-type diagrams follow the same concepts but are not discussed here. One thing worth mentioning is that the Fermi level of semiconductor does not change when V G is applied. Therefore, the V G can be calculated as the equation (1) shown below, where q is the electric charge.

The capacitance of the MOS-C devices behave as the function of applied voltage V G. There are two limits: low frequency limit and high frequency limit. The behavior of both limits are shown in the Figure 7 for MOS-C device with n-type semiconductors. Their behaviors differ at inversion and inversion to transition regions but they converge at depletion, flat band and accumulation regions.

(1) Use a line plot to show the magnitude of V G ranges corresponding to accumulation, depletion, and inversion in ideal n-type and p-type MOS devices. Please include the marking of V T.

(2) What is the biasing region of the point a in the figure 8 below?

(3) What is the biasing region of the point b in the figure 8 below?

(4) What is the biasing region of the point c in the figure 8 below? 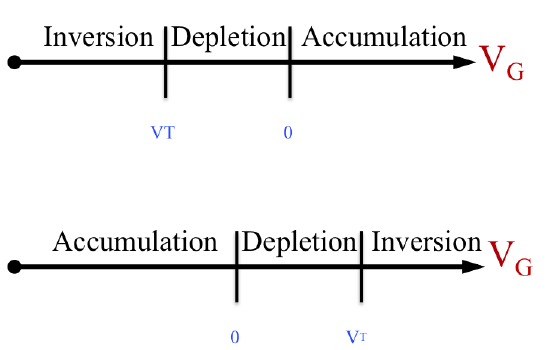